Columbus, OH teenager Wade Wilson (Tye Sheridan) lives most of his life online. Not that this is strange. It’s 2045 and most of the planet does the same thing, everyone escaping from the drudgery of their overcrowded lives by logging into the OASIS, a cybernetic virtual reality dream world where a person can be or do just about anything. Created by the brilliant James Halliday (Mark Rylance), the OASIS is now the driving economic engine in the United States as well as most of the rest of the world and, as such, corporations have understandably been trying to gain a leadership foothold within Halliday’s company for quite some time. When he dies, however, all bets for control of the company are instantly off; the eccentric inventor having crafted a game to take place inside the OASIS upon his death, a pursuit for three hidden keys that lead to a golden Easter Egg granting the victor ownership of his creation along with the massive societal power that goes along with it.

Under the visage of his online avatar Parzival, Wade proves to be a strong contender. Together with his online friends Aech (Lena Waithe), Sho (Philip Zhao) and Daito (Win Morisaki), they know so much about Halliday’s life, and the pop culture influences he held dearest to his heart, their collective ability to figure out his cryptic clues is second to none. When they are joined in their quest by the equally knowledgeable Art3mis (Olivia Cooke), Wade and his compatriots appear to be unstoppable. But Innovative Online Industries (IOI) executive Nolan Sorrento (Ben Mendelsohn), with the fervent backing of his corporate superiors and the mammoth workforce that goes along with it, also want Halliday’s Easter Egg, and he’ll stop at nothing, whether inside the OASIS or out in the real world, including the use of lethal force, in order to get it.

Based on author Ernest Cline’s best-selling 2011 novel, Ready Player One feels like the type of movie a “fake” Steven Spielberg would be making as part of second-rate science fiction parody of the Oscar-winning director’s filmography and not an actual project the real Steven Spielberg would step behind the camera to make himself. Yet here we are, Spielberg calling the shots on a motion picture that revels in the type of cinematic and cultural pop culture from the 1980s that he played a substantial role in creating. This is a movie where the main character can drive the DeLorean from Back to the Future, the Iron Giant can become a battlefield warrior and King Kong and the Tyrannosaurus Rex from Jurassic Park can all co-exist within the same environment. It’s a blink-and-you’ll-miss-it cacophony of characters, catchphrases, music cues and moments from TV, film, comics, anime and literature all practically guaranteed to make a pop culture enthusiast squeal in rapture, the sheer volume of referenced source material so voluminous it’s impossible to catch even a tenth of it all on first viewing.

Spielberg is hardly spinning his wheels or going through the motions, however. Having Cline massively rewrite his story with the help of screenwriter Zak Penn (The Avengers), there’s honestly very little of the source material remaining in this gigantic 140-minute epic. While the characters and basic plot are the same, Spielberg cannily tries to comment on a variety of hot topics ranging from the corporatization of American politics, to the #MeToo and #TimesUp debate, to kids (and a fair number of adults) disappearing into an online wormhole to the point they’re on the verge of forgetting how to exist in the real world at all. He also tries to tackle the toxic elements of geek fanboy culture, specifically white male fanboy culture, trying to show how Halliday’s cutting himself off from the world led him to live an incomplete life as well as making Wade/Parzival’s awaking to this revelation have far more emotional heft and complexity than it did in Cline’s novel.

But this adaptation still can’t overcome all of its source material’s more egregious missteps. Ready Player One remains a tale that essentially revolves around the fact only true pop culture enthusiasts have the right to say anything of value about any of the beloved properties they passionately dissect and study. It is a story where to disagree with any of these “true fans” is to be considered an imposter and a fake, where dissent or debate simply isn’t allowed. It is also still a narrative that is dominated by a mixed up white teenager’s obsession with convincing the main girl in his life that she would be better off with him by her side whether or not she’s open to the idea, all of life’s ills solved by maintaining cultural norms and not attempting to subvert them in any way whatsoever.

All of which makes Ready Player One a film that is often thematically at war with itself. Art3mis is a strong, intelligent and resourceful woman who doesn’t need Parzival to solve all her problems for her. But their relationship, while more equal here than it was in the book, still comes up somewhat short, in the end reinforcing gender norms that feel stagnant and stale in ways that border on insulting. Worse, the one character in the film who does comment on the more sickening and toxic elements of gaming and fanboy culture, a remarkably designed bad guy named I-R0k, is voiced by actor TJ Miller, currently in the middle of his own sexual assault and harassment scandals. The choice to keep him in the film has the unintended consequence of making much of what I-R0k says and comments on practically meaningless, diluting the subtle perceptive power of the villain’s observations to a frustrating degree.

And yet, Spielberg is still Spielberg, and once again the director of Jaws, Raiders of the Lost Ark, Close Encounters of the Third Kind, E.T.: The Extra-Terrestrial, Jurassic Park, A.I.: Artificial Intelligence and Minority Report, creates an eye-popping, astonishingly realized future world that amazes on a level that’s beyond almost anything a viewer can imagine, let alone fully comprehend. The OASIS is phenomenal, each foray into it a sensory smorgasbord that gets more thrilling as Parzival, Art3mis and the rest of their crew continue on their quest. Spielberg stages a number of signature set pieces that had my heart giddily racing, the best of the bunch being a foray into a classic horror film that’s as unsettling, terrifying, suspenseful, humorous and just flat-out brilliant as any single moment I’m likely going to have the pleasure of viewing this entire year.

I’m still torn on what to ultimately make of the finished feature. While a step up from Cline’s book, and while Spielberg does make a number of attempts to comment and dissect many of the more noxious elements regarding gender and race that are found inside the story, the film never seems to be fully able to reconcile any of its major themes in ways that aren’t either condescending or offensive. But the set pieces are so spectacular, and the key central performances so strong, it’s impossible to dismiss Ready Player One or not say, on at least a handful of mesmerizing levels, that it isn’t worth giving a look. Spielberg’s celebration of the ‘80s pop culture maelstrom he helped to create is a bizarre, energetically vibrant piece of dystopian science fiction that’s as fascinating as it is exasperating, and other than that I’m really not certain what else there is for me to say. 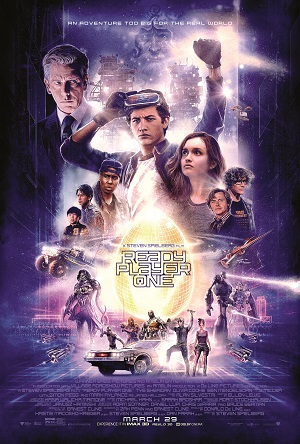