In 208 AD, Chinese Prime Minister-turned-General Cao Cao (Zhang Fengyi) makes plans to convince the Han Emperor to allow him to start a war with the last two warlords standing in his way of complete domination of the empire, Liu Bei (You Yong) and Sun Quan (Chang Chen). When permission is granted, the power-mad General’s army quickly crushes the forces of the former, sending him and his followers into the hills to try and regroup.

Knowing they need help, Liu Bei sends his trusted strategist Jiangdong (Takeshi Kaneshiro) to Sun Quan in hopes the clans can form an alliance against Cao Cao. The Southern ruler will follow the advice of his trusted advisor and vaunted war hero Zhou Yu (Tony Leung), so Jiangdong goes to him first, visiting his stronghold at Red Cliffs to convince the warrior to join forces with Liu Bei and help stop the Han Army before all is lost.

First told in the classic novel Romance of the Three Kingdoms written over 700 years ago, director John Woo’s Red Cliff, his first film made in China since 1992’s Hard Boiled, is a spectacular battle epic that’s nothing short of extraordinary. A superlative achievement, this is the filmmaker’s best effort in over a decade, and not since Face/Off has Woo showcased this kind of control and confidence behind the camera.

It’s a massive story, and it doesn’t always feel entirely coherent. There are so many characters that I must admit there were times I couldn’t follow who was who and why it was they were doing the things they were. It can be, especially early on, a bit of a frenetic muddle, the first battle between Liu Bei and Cao Cao a little hard to follow and I found it difficult to decipher the good guys from the bad.

But as the movie goes on this becomes much less of a chore, and by the time the climactic title conflict commences I’d spent enough time with these characters to know exactly who they were and on which side they were fighting. Woo does a great job of giving the primary figures in this story a moment or two where they get to imbue them with indelible traits that jump off the screen. Little things like hairstyles, fighting techniques and armor designs are an intricate part of each character’s persona, each of these components assisting the actors as they give them life.

It is Leung (reuniting with Woo for the third time) and Kaneshiro who make the deepest impression. Their relationship is the heartbeat of the movie, their developing friendship a joy to see unfold. Their scenes together add depth to the proceedings, their motivations for standing up to tyranny against impossible odds nothing less than inspiring. Also excellent is newcomer Chiling Lin playing Zhou Yu’s adoring wife Xiao Qiaom, the actress delivering a performance of such passion just the sight of her pouring a cup of tea speaks emotional volumes.

As for the action, Red Cliff shows once again that when he’s working at the top of his game there is no better maestro of this sort of thing than John Woo. So many scenes standout that I don’t even know where to start where it comes to describing them. An early bit with one of Liu Bei generals (a magnetic Hu Jun) fighting hordes of foot soldiers while cradling a newborn baby recalls Chow Yun-Fat’s balletic gunplay in Hard Boiled, while a second act skirmish between the new allies and Cao Cao’s battle-hardened cavalry had my pulse frenetically racing.

The director still has a thing for slow-motion and his love affair with doves hasn’t gone anywhere. He also still likes to slather on the melodrama, making him modern day Douglas Sirk of violent action-adventure films. But I’ve never considered either of these things to be a major problem, and while it’s true some of his films don’t quite make the grade because of these tendencies (Paycheck comes to mind), overall he tends to consistently find a way to balance these various elements in ways that are typically satisfying.

In this instance said balance is close to awe-inspiring. Even at 148-minutes this movie flies right by, moving at lightning speed, and much like Zhang Yimou’s Hero and House of Flying Daggers (the former of which had a great cameo role for Leung while the latter contained a star-making performance by Kaneshiro), Woo’s Red Cliff is an absolute stunner I’m going to be re-watching and enjoying for the rest of my life. 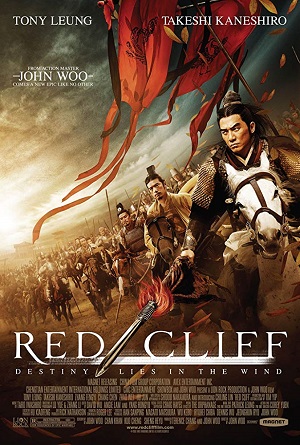