Royal Affair a Lovely Triangle of Romance, Tragedy and Sacrifice

Englishwoman Caroline Mathilda (Alicia Vikander) is betrothed to marry Danish King Christian VII (Mikkel Boe Følsgaard) and become his country’s new Queen. This is a position she is extremely unprepared for, especially as her husband-to-be is borderline insane and a puppet to a Parliament that surreptitiously passes laws intended to keep the nobility in charge and the remainder of the populace in perpetual poverty.

Enter Dr. Struensee (Mads Mikkelsen). He is an idealist and a follower of the principles of Enlightenment which are sweeping across England. Through a series of peculiar events, he’s become King Christian’s personal physician. This puts the doctor in a unique position. He and Dr. Struensee have inadvertently become the best of friends, King Christian’s mental acuity sharpening considerably whenever they are together. But this friendship also leads to the Danish monarch warming to his physician’s groundbreaking ideas, the pair conspiring to enact laws the wealthy elite are extremely unhappy with.

But there is a bigger threat to the pair’s friendship than the wrath of Parliament. The intelligent Dr. Struensee and the compassionate Queen Caroline, two people from completely different worlds who are first glance can’t stand one another, are now engaged in a clandestine affair. They’ve fallen in love, and if King Christian were to find out, the consequences could lead to the immediate end of his rule.

If the story presented in A Royal Affair wasn’t true, it’s doubtful anyone would believe it. The whole thing sounds so melodramatic it is like something out of a piece of tragic romantic fiction. It’s a scenario built on a foundation of silly implausibility, and I kept having to reread the film’s production notes to remind myself that all this 18th-century madness actually happened.

The crazy bit? Outside of Denmark, almost no one knows this story or its historical significance. Even though European history isn’t my forte, it seems like somehow, someway I should have heard something about this tragic tale well before now. How this hasn’t been given a star-studded treatment by the BBC, Hollywood or even the Danish film industry before now boggles the mind.

Writer/director Nikolaj Arcel and co-writer Rasmus Heisterberg (the pair collaborated on the script for 2009’s The Girl with the Dragon Tattoo) have done a meticulous job bringing this history to life. They utilize Bodil Steensen-Leth’s novel Prinsesse af Blodet as the basis for their screenplay before doing additional research to fill in the blanks. They cover years of history, sometimes speeding through events so fast it’s difficult to keep up, all of the palace intrigue and political double-crosses coming perilously close to blurring together.

But the central trio is splendidly written, and their interactions are so precisely fleshed out it’s easy to get lost inside the melodrama as events progress. This isn’t just an affair between a royal and a commoner, it is also a love affair between two men, both discovering friendship and brotherhood amidst unimaginable chaos, the triangle that eventually develops fascinatingly intricate and thematically rich.

Mikkelsen is superb as Dr. Struensee. Not your typical romantic lead, his growing infatuation for Queen Caroline is instantly palpable. But just as strong is the man’s admiration and understanding of the mentally fracturing monarch who he at first looks to manipulate and only later wants to help. Their blossoming friendship is masterfully realized. Mikkelsen embodies the stoic doctor magnificently, his climactic moments of hushed understanding as this resilient, empathetic intellectual realizes how far his enemies will go to see him undone heartbreakingly poignant.

It is the two newcomers, Følsgaard and Vikander, who caught me by surprise. The former, in particular, is stunning. His depiction of a monarch on the edge of sanity easily could have fallen into self-indulgent camp. Instead, Følsgaard reveals a man struggling to do his best for his country, wife and friend while battling a mental illness he can’t possibly understand. As tragic as things are for the two lovers, in the end, it was King Christian’s story arc that brought on the biggest waterfall of tears.

Arcel directs with dynamic confidence. There is an immediacy to all of this that’s striking. While elements echo similarly themed epics like Patrice Chéreau’s Queen Margot or Jean-Paul Rappeneau’s Cyrano de Bergerac, the filmmaker still does a grand job of delivering a film that captured my full attention and made me believe I’d never seen its like until now.

I adored virtually every facet of this effort, especially the gloriously romantic and emotionally chaotic final hour. Arcel transported me into the center of this drama, so much of it consuming every fiber of my being. What Caroline, Christian and Struensee went through, what their travails meant for the future wellbeing of this country all of them loved, I found it all spellbinding.

A Royal Affair is a tale of friendship, love and sacrifice the entire world needs to become more intimately familiar with. Here’s hoping this masterful motion picture is only the start of a long, satisfying and fervently edifying conversation. 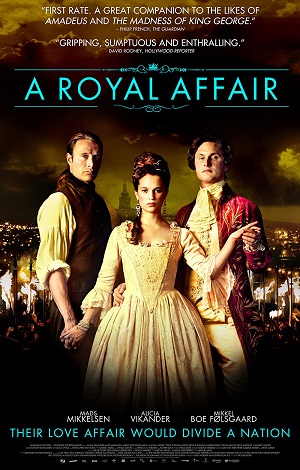