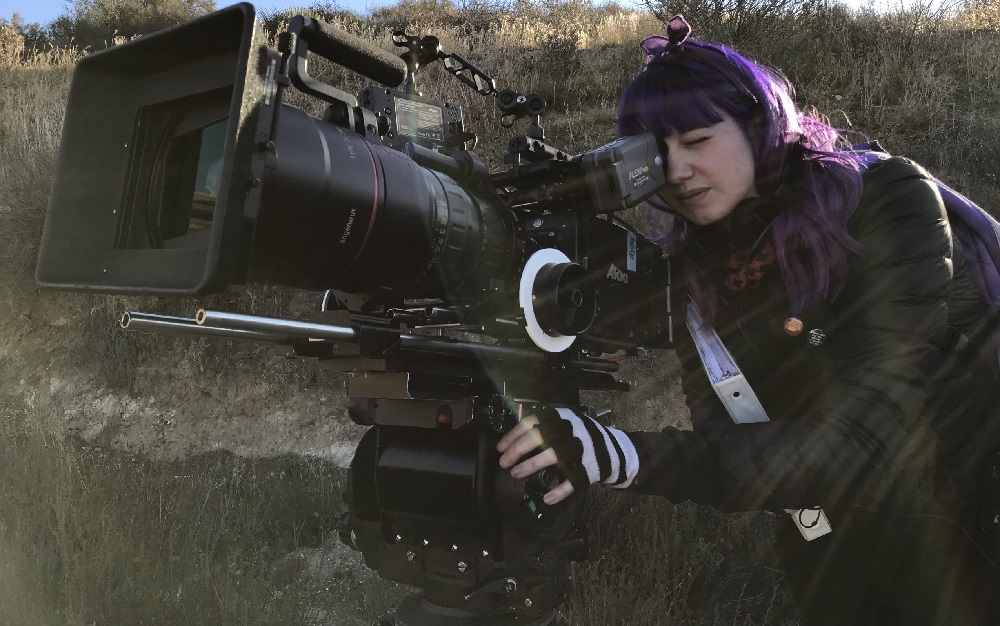 The goofy and gory horror-comedy Satanic Panic is easily one of 2019’s most invigoratingly entertaining surprises. The movie follows down-on-her-luck newbie pizza delivery driver Samantha “Sam” Craft (newcomer Hayley Griffith) on her first night of work. Just as things look like they can’t get any worse, the young woman gets a delivery in an upscale section of town. But instead of a massive tip, she ends up the intended sacrificial target of a local coven who are in need of a virgin to satiate one of Hell’s most despicable demonic entities.

Featuring Rebecca Romijn, Jerry O’Connell and Happy Death Day’s cupcake murderess Ruby Modine in key supporting roles, the movie is riotous blood-splatted hoot that rips the patriarchal status quo to shreds while also making a surprisingly multifaceted argument that it’s time women were given the opportunity to run the show. Director Chelsea Stardust handles things with an effervescent confidence that’s downright infectious, this gruesome bit of comedic terror a magical rollercoaster ride of blood, guts, friendship and feminism I can’t wait to climb aboard and ride again as soon as possible.

I had the opportunity to reach out to Stardust to chat about her latest in endeavor. Here are some edited excerpts from what she had to say:

Sara Michelle Fetters: I had no idea what to expect from this movie. I’m just going to be honest about that. In the spirit of being perfectly honest, I loved the frick out of Satanic Panic.

Chelsea Stardust: Yay! That’s great. Thank you so very much.

Sara Michelle Fetters: How did you get involved with Grady Hendrix’s script and the story he and Ted Geoghegan had come up with? What point in the process were you a part of the mix?

Chelsea Stardust: Fangoria sent a script that Grady Hendrix had written and they were looking for directors. They ended up sending it to my agent for my consideration. They had talked to Blumhouse because I had just done a movie with Blumhouse. I think they were asking about how their experience was with me.

I read the script, I saw that Fangoria’s name was attached and it was written by Grady, who I’m a huge, huge fan of, and I just loved it. I just pitched my vision for how I wanted it to look and I gave [the producers] film references that would be inspirations for the tone and the look of the movie. I was just very clear on my vision. I think they recognized that. I really wanted the job and I was just like, I need to go above and beyond because I want to get this. And then they said yes.

Sara Michelle Fetters: In some ways it surprises me that neither Grady or especially Ted wanted to direct this themselves. But I am so glad they didn’t because I think there is just this feminine spirit, this feminine energy that courses through this one. And as talented as both men are, I’m not entirely sure that they could have brought this feminine spirit to the production in the same way you  do.

Chelsea Stardust: One of the things that attracted me about the script was that women just run the world in this movie. That all the men kind of take a backseat and it’s this awesome female-run coven/cult which I just felt like I hadn’t really seen before.

Sara Michelle Fetters: You talk about your pitch and the ideas you had for the movie when you were trying to get the job, but once you had it, once you knew you were going to be the one running the ship, what were some of the things that you felt were important to emphasize as far as Sam’s journey was concerned?

Chelsea Stardust: Sam as a character, I just really wanted to make sure that this was her story and her journey. Grady and I talked extensively about her backstory. Then there was working with Hayley Griffith. She had submitted a self-tape. That’s how she auditioned. I was watching other auditions and meeting with actresses, but I kept going back to Hayley’s tape and I thought this woman is Sam. There was no doubt in my mind. Luckily the producers agreed and we brought her onboard.

But Sam’s story, and also her and Judi’s relationship, that is the heart of this movie, this female friendship, it was something I cared very much about. As a filmmaker with Satanic Panic, my goal is that I want a group of teenage girls to rent this movie when they have a slumber party and watch it over and over again, and maybe some of them will be inspired to make movies themselves. Sort of like how I was when I watched fun horror movies when I was in middle school and high school. That helped inspire me to make them. That’s my hope for this.

Sara Michelle Fetters: Ruby and Hayley bring so much energy. The moment they finally hook up in this movie, I was sort of in the bag for it early on, especially during the sequence when Hayley and Jerry O’Connell have their moment together, but holy cow once Hayley and Ruby hit the screen together it all just becomes so electrifying. Did you feel that when you were making the movie?

Chelsea Stardust: Oh my goodness, yes! Hayley and Ruby had not met each other before and the first day when we did a rehearsal. It was very laid back. We talked through that scene in the kitchen, the skin-sealing scene, and the minute they met each other they instantly were best friends. They loved each other and they took such great care of one another on the set. They both have the sort of arc throughout the movie and both in reality and in the film where they are sort of helping one another traverse through this incredible strange situation.

And they’re still best friends to this day! I was so happy that I got to facilitate that.

Sara Michelle Fetters: We can’t talk about this movie, though, without talking about Rebecca. It looks like she was just having a blast making this. Was she?

Chelsea Stardust: Yes! Definitely yes. She was a joy to work with.

Sara Michelle Fetters: Was it difficult to get her to come aboard the project?

Chelsea Stardust: No. It wasn’t. She was excited to do the film right from the get-go. I remember when we were talking about the Danica Ross character and I was like, we need someone who is just really fierce and powerful and can carry this role. When we were discussing Rebecca we’re like, let’s give it a try. Let’s reach out to her.

I ended up having a Skype session with her because I was in Texas prepping the movie and she talked about loving horror and loving Fangoria and renting every horror movie she could get her hands on when she was younger. We just talked about the movie and my vision for Danica, and she was so excited. Also, knowing that she grew up loving horror movies like I did, it was just instant thought that this role was going to be hers.

She’s just so savage and awesome on-screen. You can’t help but just stare at her and become infatuated because she just steals every scene she’s in. She was a lot of fun to work with. And then working with her and Jerry together was also really fun. They had that one scene together and it was a treat to watch them work.

Sara Michelle Fetters: I don’t know if I want to talk about him or that scene you’re speaking about too much as I’d like to avoid spoiling anything, but it’s almost as if Jerry is playing the older, emasculated version of the character he portrayed in that 2010 Piranha remake. If he has survived getting eaten alive, that is.

Chelsea Stardust: Ha! I love that. He’s fun to watch. But I love that take on his character.

Sara Michelle Fetters: It’s a Fangoria movie. We expect there to be some gore and some blood and some guts and some violence. What I loved is that it felt to me that almost all of that Fangoria stuff was being unleashed and utilized to help progress the plot forward and further Sam’s surreal nightmarish journey. It wasn’t gore for gore’s sake. Was this something that you were conscious of as you were crafting those sequences?

Chelsea Stardust: Definitely. That’s something we talked long and hard about because you always want to be moving the story along because the story’s the most important thing. A lot of times the story can get lost in your crazy gore effects. But this one, everything is progressing the story. So yeah. Absolutely. That’s a totally correct observation.

Sara Michelle Fetters: I don’t want to call it fan service as far as that gory stuff is concerned because it’s such an integral and important facet of the movie, but how do you balance these gross-out sequences to make sure that yeah we’ve got the blood and the guts but these moments are still progressing these characters forward?

Chelsea Stardust: I think that the balance sort of came from Grady’s great script. It’s like, we deal with gore, you do have to satisfy that because there are people that are just a die-hard gore fans, so you are conscious of that. But honestly? I think it’s just how Grady wrote the script and constructed the story where he was mindful of that as well. We just wanted to make sure that translated to screen.

Sara Michelle Fetters: What did making this movie mean to you? What did you take from the experience start to finish?

Chelsea Stardust: I loved how women just ran the world in the movie. That was something that I thought was really important. It was a story I wanted to tell. It’s just something I hadn’t seen before. It’s something I really wanted to do. Also, I hadn’t done horror-comedy, yet. I had just done All That We Destroy, which was a science fiction thriller, so I really wanted to explore this new sub-genre. To me, I also like to think of Satanic Panic as my punk rock satanic Wizard of Oz. There’s a lot of nods to The Wizard of Oz in this movie. That’s what it is to me. It’s my love letter to a movie I grew up with loving, and I got to combine it with a horror movie! That was a dream for me.

Chelsea Stardust: That’s a great question. I love the horror genre, and I want to keep working in that and exploring new things. But I want to do more sub-genres of horror. Right now, I’m attached to a coming-of-age story that’s also revolving around a serial killer that’s written by the writers of my first movie. Other horror sub-genres I’d also love to work on include things like body horror, and maybe a man-versus-creature or man-versus-nature kind of thing. And I do love movies that involve witches, so I’d love to keep exploring that.

But the thing I look for in everything I have coming up and that I’m working on is I’m just looking for really unique, awesome and powerful female characters. That’s the one thing I’m always trying to keep an eye out for because I want to continue to explore and tell those stories. We’ll see. There’s a lot that’s cooking. I have a lot of eggs in a lot of baskets. We’ll see what the next big thing is. 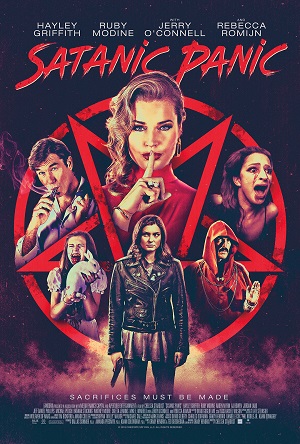