“Buffy the Vampire Slayer” and “Angel” creator Joss Whedon thought he was going to make it three-for-three with the 2002 Fox sci-fi series “Firefly.” Goodness knows critics thought so, his multi-character space opera one of the most buzzed and talked about before its first episode even hit the airwaves.

But Fox wasn’t so enthusiastic. First off, they ordered Whedon to film a new pilot. Next, they proceeded to market the series as a second cousin to the gung-ho action-heavy theatrics of “Star Wars” or the more recent “Star Trek” spin-offs, choosing to ignore the fact it was actually an eight-person western about distaff smugglers out on the universe’s frontier. Finally, every time it looked like the show was going to catch on, the network preempted it for one reason or another, never allowing “Firefly” to get its legs and take off.

After eleven (some markets only got eight) of its original thirteen episodes had aired, many of them out of sequence, the show was unsurprisingly canceled by the network. But that’s just the beginning. Here’s where things get interesting. In this age where DVD has changed the home viewing landscape and shows that once looked dead and buried now find new life amidst the wonderment of a digital landscape, “Firefly” became, for a brief moment, one of the top-selling TV DVD compilations of all time (300,000 copies at last count). These sales gave Whedon pause. Was there the possibility of more for his beloved new cast of characters? Would their story continue?

Universal thought there might be, banking a few million on the series’ rabid fan base and Whedon’s skills as a storyteller to rope in new audiences. Suddenly the cast of “Firefly” found themselves standing on the deck of Serenity, reunited and reinvigorated. It would be a chance to prove Fox wrong and show that they sent the show out to pasture far too early. But successful theatrical adaptations of acclaimed TV shows are few and far between, and as Whedon’s choice to make his theatrical debut, Serenity presented a minefield even his famous vampire slayer would have had trouble navigating her way through.

Whedon made the right choice. This just isn’t the best science fiction film to hit theatres since the original Matrix, it’s also one of the best, most exciting and intelligently written features I’ve seen this year. An astonishing blend of action, comedy and drama, this sci-fi-western-mystery-thriller-adventure hybrid puts nearly every other big studio thrill ride, save maybe Christopher Nolan’s Batman Begins, to shame. Whedon shows he’s one of the more eccentric, witty and breathlessly talented engineers of popular entertainments working today, and no matter what happens with this film it’s readily apparent he’s someone worth keeping an eye on.

Picking up a few months after the series’ final episode, the crew of Serenity is still trolling the outskirts of space picking up various jobs when and where they can. This time they’ve been contracted to rob a small backwater mining outpost’s security payroll. Captain Malcolm “Mal” Reynolds (Nathan Fillion) decides to take the ship’s most unusual passenger, the mentally unbalanced River Tamm (Summer Glau), with him on this expedition, thinking her peculiar cognitive abilities might come in handy. Her brother and ship’s doctor Simon (Sean Maher) disagrees. He and River are fugitives, hunted by the intergalactic political authority, the Alliance, and taking his sister out on a job might call attention to her, attention neither one of them or the crew of the Serenity needs.

What no knows is that the Alliance is upping the stakes as it concerns the Tamms, enlisting the services of a nameless operative (Chiwetel Ejiofor) to bring them in. Why? River was an experimental guinea pig designed to transform into the perfect spy and assassin at a moment’s notice, and before being rescued by Simon she learned more about the Alliance and their plans for the universe than they wanted her to know. It’s information that torments River’s nightmares. It’s also information that could get everyone aboard the Serenity killed.

This is danger unlike Mal, second in command Zoe (Gina Torres), pilot Wash (Alan Tudyk) and the rest of the crew have known before. Not only is River unstable, apt to take out an entire bar of thugs with her bare hands as she is to hide under a bed wilting in fear, the brutal operative dogging the ship’s every move isn’t against utilizing little things like genocide to inch closer to his target. But the secrets River knows will lead Mal and the Serenity to a location on the edge of space they didn’t know existed, and once they learn the truth none of them will ever be the same ever again and in the process this gang of smugglers, thieves and reprobates might just turn out to be the one thing they never thought possible: Heroes.

Walking into Serenity I was both excited and worried. “Firefly” was a remarkable show, but how do you make a smooth transition to the big screen and retain both the character-driven melodrama and explain the complex backstory to a wider audience? To my amazement Whedon answers both questions right away, using Ejiofor to do it for him. The operative explains this 500-years-in-the-future-world, catches the audience up to what’s happened up to now and sets the stage for what’s going to transpire next. Whedon submerges viewers into his dense sci-fi world with ease.

From that point on the director maneuvers his complex narrative with stunning confidence. His script touches on a failed rebellion, political infighting, cannibalistic space wanderers (the freakish Reavers), western-style shoot-outs, two unfulfilled romances, one marriage, a humungous space battle, daring escapes, barren lost worlds, tragic melodrama and a slew of the filmmaker’s famously droll one-liners. While it probably works a little better if a person is familiar with the series, the film is so well written, acted and directed that the separation in enjoyment by those in the know and those who are clueless is practically negligible.

A case could be made too much is going on. Some of the show’s most beloved faces, notably alluring professional Companion Inara (Morena Baccarin) and the mysterious Shepherd Book (Ron Glass), are given little to do, while another new character, tech-savvy know-it-all Mr. Universe (David Krumholtz), is more an expositional device than he is an actual human being. Annoying, yes, but really that’s about all there is to complain about. Serenity is one of 2005’s most irresistible pleasures filled with strong performances, breathtaking action sequences, remarkably affecting emotional nuances and a collection of surprising twists and turns, Whedon crafting one of the most blissfully entertaining movies I’ve seen this year. 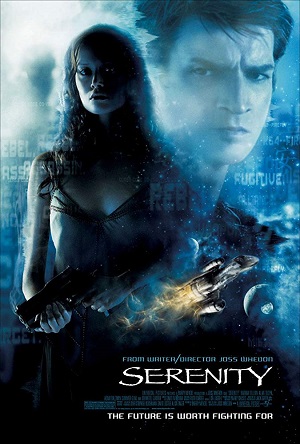