Thousands of years before magic became nothing more than a fantastical dream, Master John Gregory (Jeff Bridges) is the last of the vaunted Falcon Knights, a celebrated order of warriors known as Spooks responsible for fending off the forces of Darkness including the all-powerful Witch Queen Mother Malkin (Julianne Moore). Having trapped her in what was supposed to be an unescapable prison, with the power of the Blood Moon she has escaped her mountain confinement with plans to destroy all her former captor holds near and dear while laying the remainder of humanity to waste with the help of her devoted minions. 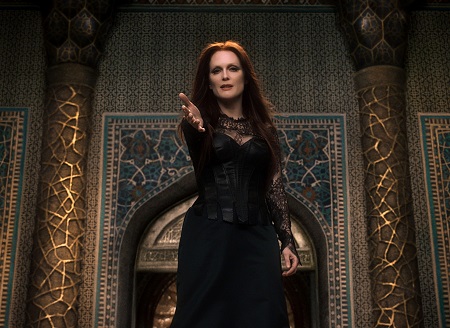 In need of a new apprentice, Gregory has journeyed to the home of Tom Ward (Ben Barnes), a seventh son of a seventh son, in hopes of enlisting him on his quest to stop Mother Malkin before her plans can take shape. But things are not all they appear with the young man, a power emanating through him the likes of which the Spook has never known before. It might have something to do with the visions of a cloudy future he sometimes proclaims to see, or it could be he his willingness to see the best in everyone, including the mysterious half-witch Alice (Alicia Vikander). More than likely, however, it has everything to do with Tom’s secretive mother Mam (Olivia Williams), the woman concealing a terrible secret that leads directly back to the feet of Mother Malkin herself.

Based on Joseph Delaney’s The Spook’s Apprentice, the first book in the author’s massively successful 13 book The Wardstone Chronicles series, Russian director Sergey Bodrov’s (Prisoner of the Mountains) long-delayed Hollywood debut Seventh Son isn’t so much a disaster as it is an instantly forgettable waste of time. Having bounced in and out of the release schedule for the past two years, the film attempts to set up a new fantasy playground in hopes of filling the vacuum now that Peter Jackson has left Middle Earth behind and Walden Media appears to be done transporting the Pevensie children to Narnia. Sadly, this epic attempt falls pointlessly flat, little interesting or inspired taking place relegating things to a plain of irrelevance that’s moderately dispiriting.

To be fair that’s not entirely true, the director staging a couple of rousing sequences of action and mayhem that get the pulse racing and set the blood afire. There’s a great bit involving Gregory and Tom taking on one of Mother Malkin’s most lethal warriors, the bear-clawed Urag (Jason Scott Lee), while an escape from a troll-like creature known as a Boggart is an unabashedly silly rollercoaster ride of cartoonish lunacy that’s more fun than it probably should be. Barnes and Vikander also have a couple of touching moments together, their chemistry cutting through the somewhat tedious mechanics of their rudimentary and overly familiar relationship giving the film a little more in the way of heart than it would have possessed otherwise.

I’ll also say this, even when Jeff Bridges is picking up a paycheck he still gives far more of himself than most becoming a jovial and electrifying presence in the process. Much like he did with the equally dopy, if even more underwhelming, R.I.P.D., the Oscar-winner appears to be having a blast doing his idiosyncratic thing, twirling and whirling through the production with a jokey fearlessness that’s close to incredible. Bridges is a hoot, traveling through the proceedings with a distinctive cocksure grace that’s something else.

But the rest? The rest is a waste of time. Moore is a facile, boring villainous, going through the histrionic motions as if she doesn’t know what possessed her to take the role in the first place. As for her minions, other than Lee’s all-too-brief work the majority are faceless creatures doing little of consequence, the exception being two-time Academy Award nominee Djimon Hounsou who deserves a heck of a lot better. Coupled with his wasted appearance as a second-rate toady in Guardians of the Galaxy, the remarkably talented actor is quickly becoming nothing more than a poorly used afterthought. Here’s hoping something is done to change that very, very soon.

It’s hard to know where everything went wrong. Bodrov is a talented director, his Russian productions, including the Oscar-nominated Mongol, speaking for themselves. For that matter, so do the talents of screenwriters Charles Leavitt (Blood Diamond) and Steven Knight (Locke), so the fact everything falls so frustratingly flat is almost unfathomable. But the teaming up of all these cinematic talents – including behind-the-scenes craftsman like vaunted production designer Dante Ferretti (Hugo, The Name of the Rose), costume designer Jacqueline West (Quills) and composer Marco Beltrami (The Hurt Locker) – is perplexingly all for naught, and while the work everyone does is on the surface solid what their efforts produce is anything but.

I admittedly long for the days studios would make movies like Seventh Son on a regular basis. I feel like Matthew Robbins’ 1981 fantasy Dragonslayer is legitimately great, while films like Ridley Scott’s Legend and even Peter Yates’ undeniably derivative Krull make me grin ear-to-ear like a sword and sorcery loving madwoman. But Bodrov’s epic just doesn’t cut it, not even as a guilty pleasure, and saying that out loud kind of breaks my heart. 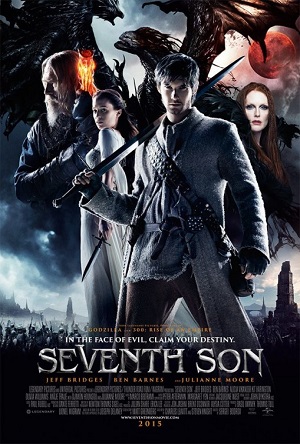