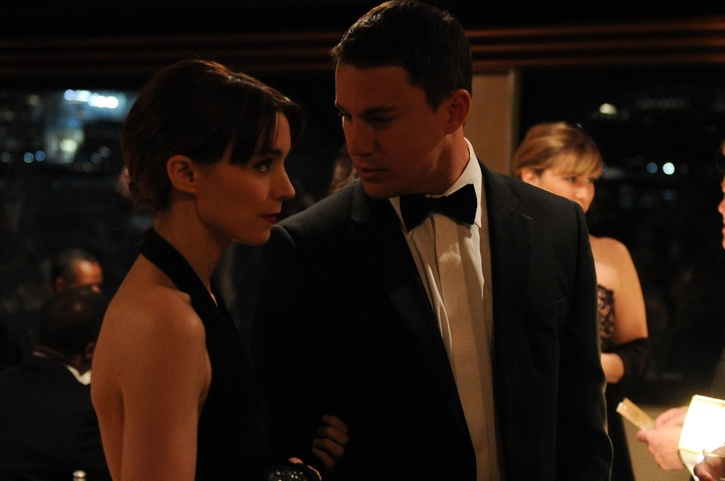 Labyrinthine Side Effects a Mesmerizing Thriller

Emily Taylor (Rooney Mara) is on the verge of having her life back. For the past few years husband Martin (Channing Tatum), a highly successful New York investment banker, has been in prison for skirting financial laws. Today he is getting out, dreaming of reestablishing himself as a businessman and making their lives whole. Things couldn’t be better, the young wife putting on a brave face and trying to support him best she can. 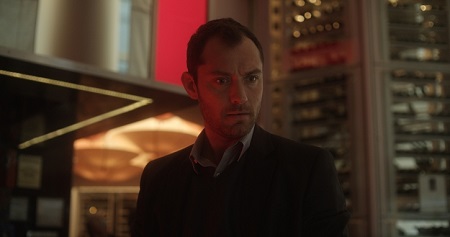 But all is not as it seems. Emily has a long history of depression, a battle that has led her to see multiple specialists and rely on various medications. A recent attack sees her under the care of Dr. Jonathan Banks (Jude Law), and after consulting with one of her former psychiatrists, Dr. Victoria Siebert (Catherine Zeta-Jones), he decides to try his patient on a relatively new drug in order to see if it evens her out. But the medication has some strange side effects, some of which worry Martin, and although everything on the surface appears fine he starts to wonder if all is truly well with his wife.

If anyone tries to tell you more about director Steven Soderbergh’s (Traffic, Magic Mike) new thriller Side Effects other than that hush them up as quickly as you can. With an intricate, densely plotted script by Scott Z. Burns (Contagion, The Informant!), the movie never goes where you expect it to, does things you do not anticipate and moves its characters into some incredible (and incredibly surprising) situations. It is the first great movie of 2013 and one guaranteed I’ll still be savoring and talking about come the end of the year, the whole thing an Agatha Christie meets Alfred Hitchcock meets Claude Chabrol jigsaw puzzle the assembling of which is all kinds of fun.

What happens? What’s the twist? Who is who and what is what? All that needs to be discovered one delectably delicious piece at a time, Soderbergh and Burns playing things wickedly close to the vest never revealing their respective cards until the precisely proper time. When the surprises come, and they do come, they are delivered with a matter-of-factness bordering on devastating, the realization that the wool has been so completely pulled over your eyes a giggle-inducing shock that will have many viewers grinning from ear to proverbial ear.

Law is excellent, traversing the emotional minefield his character is forced to traverse with grit, determination and wily abandon. His moves don’t always make sense, some of them feeling as if they are coming from a place of hysteria bordering on dangerous. Ultimately, however, his intelligence is proven and Law manages to convey his conflicts rather magnificently, giving the film an extremely human center belying all the multifarious chaos that surrounds him. 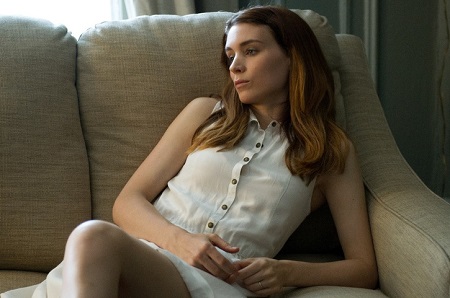 Then there is Mara. If you thought her Oscar nominated performance in David Fincher’s The Girl with the Dragon Tattoo might have been a fluke think again. She is astonishing, easily giving the first nomination-worthy performance of the year doing things I was more often than not completely astonished by. She crisscrosses complex territory with amazing confidence, making Emily a cryptic yet believably byzantine character battling demons difficult to relate to and even harder to comprehend. The actress is beyond terrific, a late third act revelation and change of demeanor so startling I was nearly beside myself in glee.

Everyone else is fine, better than that if I’m being honest, Soderbergh handling all the facets with his usual pinpoint attention to detail. The film is also superbly shot by the director (under his usual pseudonym Peter Andrews), while Thomas Newman’s (Skyfall) somewhat stylized score fits the proceedings flawlessly. While I guess a case could be made that things might come together a bit too nicely at the end, for my part I was more the ecstatic about where Side Effects took things, the final moments a joyous reminder of what cinema at its finest can look like. 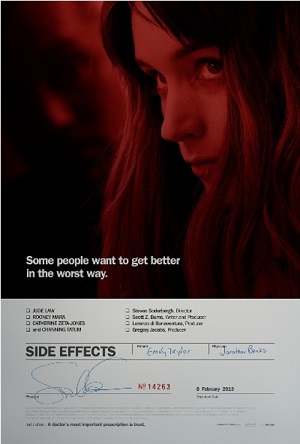