Once-famous True Crime writer Ellison Oswalt (Ethan Hawke) has just moved his family into a new home to begin his latest project. He’s researching the mysterious deaths of a family of four and the subsequent disappearance of their youngest daughter, sure the local police must have missed something during their investigation. What he hasn’t told his wife Tracy (Juliet Rylance) or his children Trevor (Michael Hall D’Addario) and Ashley (Clare Foley) is that this house is the very place those grisly events took place.

Ellison has made a find in the attic. Labeled ‘Home Movies’ on the box, he’s found a cache of Super 8 footage from the past few decades supposedly of a group of families seemingly at play, each film entitled something like ‘Pool Party’ or ‘Hanging Out.’ In reality they are grainy, haphazardly edited chronicles of murder, each reel building to the deaths of every member of the family save one, in some ways mirroring the events of the same crime the author is currently investigating.

Less is more where it comes to director Scott Derrickson’s latest fright-fest Sinister, the absurdly tense shocker a definite step up from the filmmaker’s previous efforts The Exorcism of Emily Rose and his misguided The Day the Earth Stood Still remake. Co-writing the script with newcomer C. Robert Cargill, the movie is an original horror flick that melds a somewhat traditional narrative with found-footage aesthetics transforming the picture into some weird, borderline bonkers yet wholly compelling melding of The Shining and Paranormal Activity.

But is it scary? That’s the question that still vexes me these many days after my initial viewing. I was tense. There was certainly some suspense. The dramatic elements of the story are undeniably effective. Yet was I scared? I can’t say I was. There weren’t any shivers going up my spine, no Goosebumps slowly crawling up my skin. As unhinged as Ellison becomes throughout the story, and as creeped out as his family ends up being, genuine fear is rarely generated by the proceedings.

The reasons for this are few but also bluntly obvious. Once the playing field is set and the dynamics are known, there really is only one place the plot can ultimately head towards. This makes for few surprises, and any sense of shock or awe is rather invisible. As ghost stories, haunted house experiences or macabre tales of possession are concerned, the film doesn’t exactly tread a lot of new ground or try to change the game, and on that front it comes up a little short from an entertainment perspective.

Even so, Sinister is pretty darn engrossing. If taken as a gothic drama, as some sort of examination of a driven family man at an emotional and moral crossroads, Derrickson’s latest is magnificent. When it focuses on Ellison’s internal devolution, the way he slowly fractures at the seams, bends his own rules and gives into his egotistical airs, all of it is deeply unsettling. At its heart this is a tragedy of a man inadvertently attempting to fall on a sword of his own welding, making the final moments more poignantly heartrending then I anticipated.

Hawke is fantastic. He gives a complex, multifaceted performance, and while Ellison’s love for his family is never in doubt, neither is his desire to re-achieve a level of fame he’s let lapse throughout a decade of underachievement. As great as Hawke is, the movie is almost stolen right out from under him by James Ransone, the young actor making an amusingly indelible impression as a star-struck local deputy eager to help the author out but who’s also much smarter than his overly enthusiastic exterior first leads the viewer to believe.

I still wish Sinister was scarier. That I was never truly frightened keeps me from embracing the film with open arms. But overall Derrickson and Cargill have come up with something moderately original, anchoring events in honest human failings that are uncomfortably relatable. As a tragic drama it all works rather splendidly, and because of that I do feel this disquieting supernatural suspenser is worthy of a look. 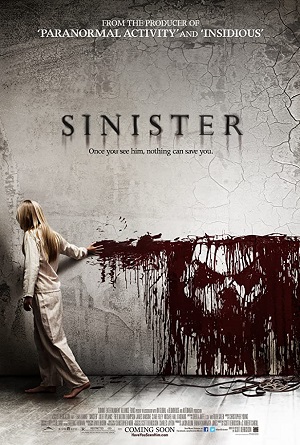