Inventively Cruel Smile Nothing to Grin About

When I came out of writer-director Parker Finn’s well-made, dementedly limber supernatural shocker Smile, I was asked what I thought. I said it was fine. Finn has talent. There are several strong ideas and some even better moments of unrelenting chaos and dread. He’s cast his film beautifully, and star Sosie Bacon carries things with hypnotically unsettling aplomb.

But the further I got from Finn’s feature-length debut, the more the darn thing infuriated me. Not because its influences, ranging from A Nightmare on Elm Street to Ringu (or its strong Hollywood remake The Ring) to It Follows are all fairly obvious. Not because I found the majority of the narrative relatively unsurprising. That didn’t bother me at all, mainly because Finn’s skills behind the camera are undeniable, and he does a nice job of making the material he’s exploring feel new, even if in reality it is anything but.

No, my anger was born from how his story treated its primary character, hospital psychiatric emergency clinician Dr. Rose Cotter (Bacon), whose trauma is the crux of the entire plot. This is a woman who suffered unimaginable psychological damage as a child, and as much as she’s tried to get over it by helping others deal with similar sorts of indescribable pain, her actual life as presented here is a continual dirge of hardship, belittlement, and misery that only becomes worse once a soul-sucking demon latches on to her.

Smile is trauma porn. It deals with Dr. Cotter with such unrelenting cruelty that I’m honestly not sure what the point of it is or what Finn is trying to say. If he’s just crafting a gruesome little demonic creature feature, then why make it so maliciously bludgeoning? If he’s trying to dig deeper, to make some grand statement about mental illness or the lingering effects of childhood trauma, why be so exploitive in how this madness is depicted and viewed? There’s no feeling to any of it, no attempt to treat the whirlwind of emotional nuances Dr. Cotter is dealing with as anything more than elements for a well-constructed jump scare or bleakly nihilistic terror.

The plot concerns a mysterious force that vindictively torments its prey for roughly a week before possessing them fully. Once it does so, this invisible entity forces the person to commit suicide right in front of someone else, as brutally and as bloodily as possible, all with a giant malevolent smile plastered on the victim’s face. The demon then transfers itself onto the person who stood there watching, creating a continual cycle of inexplicable violence seemingly without end.

The similarities to Ringu and It Follows are rather obvious, but Finn does a nice job of crafting a believable mythology for his baddie that doesn’t feel too indebted to either of those horror classics. In Dr. Cotter, he has a smart, intuitive heroine who believably finds ways to put pieces of the puzzle together, even as she feels like she’s mentally falling apart, all while trying to fight off an attacker no one believes exists and might just actually be a figment of her fracturing imagination.

But dang does the film seem to despise its main character, even as it presents her as the smartest person in the room. All of the primary people in her life are jerks, with almost no redeemable qualities. Almost all of her attempts to reach out for help are derided or ridiculed, even before she can lay out the particulars of the situation. The flashbacks to her mother’s suicide and a reveal involving her part in what happened as a 10-year-old child are delivered heartlessly.

Finn has talent. His visual compositions are top-notch. Even at almost two hours in length, his film never feels padded or plodding. The director knows just when and how to unleash the sensational creature and makeup effects supervised by Oscar-winner Tom Woodruff Jr. (Death Becomes Her, Alien 3) and his talented team. Best of all, Finn gives Bacon freedom to shape Dr. Cotter’s psychological descent with frenetic, internalized agency in a boldly disheveled performance that’s frequently invigorating.

Which makes how the character continually gets treated all the more upsetting. Look, I’m obviously not trying to say all final girls need a happy ending. That’s far from the truth. But they do need to be treated with respect. I do think they deserve some form of decency, and I can’t say I felt that was the case here.

For all its strengths, Smile does Dr. Cotter dirty. Worse, it made me feel culpable in her abuse. I didn’t like that. Not one single bit. In fact, I unreservedly hated it. 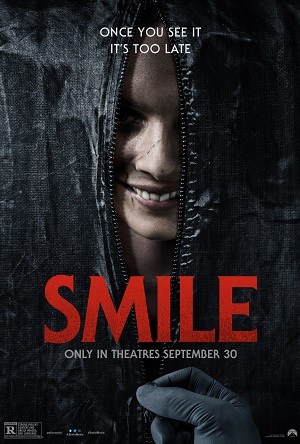