Based on the popular SEGA video game, Sonic the Hedgehog is an energetic family-friendly buddy adventure featuring a throwback, larger-than-life comedic performance from Jim Carrey as the villainous Dr. Ivo Robotnik and a rambunctiously gregarious vocal turn from Ben Schwartz as the title character. The film is also yet another reminder of how strange it is that James Marsden has never become a bigger star, his charismatic, self-effacing turn as small-town sheriff Tom Wachowski oozing a form of magnetic confidence I was thoroughly charmed by.

Not to say I was otherwise blown away or as equally enamored with the movie as a whole. While the children in my preview audience were suitably thrilled by the CGI-created supersonic hedgehog’s first live-action adventure, I cannot say I felt the same. While Patrick Casey and Josh Miller’s screenplay isn’t devoid of ingenuity, there honestly wasn’t enough of it to keep me engaged. The setup to this story is rushed, and the connections back to the video game are shoe-horned into the scenario and rarely feel organic or do anything for the narrative flow.

It all honestly left me a little bit bored. Carrey would pop in and do something crazy, unleashing his patented style of late 1990s, early 2000s bug-eyed mugging. Sonic would throw out a quip and then race across the screen at lightning-fast speed while Marsden reacts in a series of surprised wide-eyed, mouth-agape one-shots followed by a super-cool one-line comeback commenting on what’s just happened. But as fun as all of this might be at times it also grows increasingly tiresome as events progress towards their conclusion, making the climax far more underwhelming than it by all rights should have been.

The plot is overly complicated nonsense involving Sonic being inadvertently discovered on Earth, the U.S. Government inexplicably sending Dr. Robotnik to capture him and Sheriff Wachowski deciding to help the talkative little blue hedgehog before that can happen. There’s also a whole thing involving the golden rings from the video game, each one opening a portal that can transport the user to wherever they think about, even across the galaxy to unexplored worlds filled with giant mushrooms.

Newbie director Jeff Fowler (he was a visual effects artist and developer on Spike Jonze’s Where the Wild Things Are) orchestrates the action rather well, a mid-movie set piece involving an escaping Sonic and Wachowski being chased by one of Dr. Robotnik’s massive robotic machines both imaginative and thrilling at the same time. Marsden and Schwartz have genuine chemistry that delicately develops throughout the film, and by the time things were over I fully believed the mutual affection that has blossomed between them was entirely genuine. As for Carrey, he makes the most of his screen time, his exuberant largess fitting the character kind of perfectly.

Tika Sumpter is frustratingly underutilized as Wachowski’s veterinarian wife Maddie, an entire subplot devoted to her sister (portrayed by Natasha Rothwell) trying to engineer a divorce for the loving couple is strangely grotesque and I wish it wasn’t a part of the movie. There’s also an absurd level of casual destruction during the climax that comes practically out of nowhere, like everyone in San Francisco is just used to a crazed mustachioed madman flying through their streets blowing up cars while chasing a speedy blue alien hedgehog.

But none of the kids in my audience seemed to care about any of this. They enjoyed watching Sonic do his stuff, laughed every time Dr. Robotnik did something crazy and thrilled to the climactic showdown where all looked lost, Wachowski proves his friendship and our hero’s full electrifying potential is finally realized. While Sonic the Hedgehog didn’t win me over, I sure as heck was never so annoyed that I regretted giving the film a look. I enjoyed myself just enough to comprehend how others will undoubtedly be overjoyed by this hedgehog’s first big screen adventure. This one’s for them. 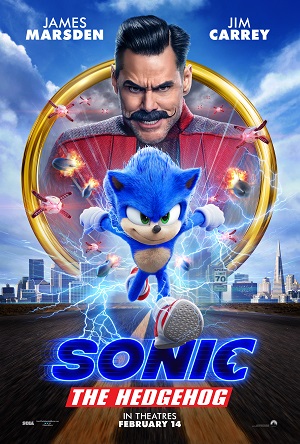