After the irredeemable disaster that was 2014’s The Amazing Spider-Man 2, it comes as no surprise that Sony would choose to reboot the comic book character for the third time in 15 years. What potentially could have caught some fans a little off guard was that the Hollywood powerhouse would join forces with Marvel Studios, relinquishing some of their control over the character in order for the Iron Man, Guardians of the Galaxy, Thor and Doctor Strange hit makers to help them craft new adventures for everyone’s friendly neighborhood superhero. British actor Tom Holland stepped into the role of Peter Parker / Spider-Man in order to be a part of last year’s box office smash Captain America: Civil War, his brief cameo during the film’s central superhero melee whetting the public’s appetite for his standalone appearance in this year’s Spider-Man: Homecoming. 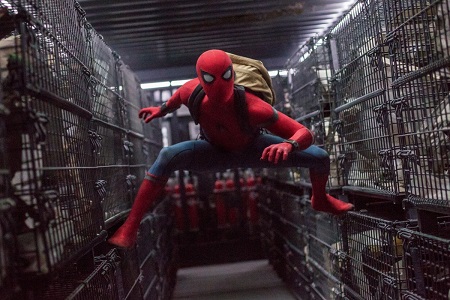 A serious step in the right direction (and a major upgrade over both of the Marc Webb directed The Amazing Spider-Man features), this new high school-set iteration of the character is an agreeable joy for every second of its two-hour running time. In fact, the moment it came to an end I tweeted out that Spider-Man: Homecoming might just be the most adorable motion picture I see all summer, a statement that also just so happens to apply to the Marvel Cinematic Universe (MCU) as a whole. This is as giddy an action-filled superhero frolic as anything I could have hoped for, and while I’m not saying the world needed another iteration of the character in such a short period of time, that does not mean I found this Sony-Marvel partnership anything less than a complete and total blast.

Dispensing with the origin story entirely (Uncle Ben is nowhere to be found), director/co-writer Jon Watts (Cop Car) and his cadre of five additional screenwriters pick up the story not too long after the battle at that German airport in Captain America: Civil War. Tasked by Avengers Initiative stalwart Tony Stark (Robert Downey Jr.) to spend more time trying to be an average teenager and not a web-slinging superhero, Peter Parker (Holland) goes back to his daily routine of ogling Senior student Liz (Laura Harrier), verbally jousting with classmate Michelle (Zendaya), building Death Stars out of LEGO’s with best friend Ned (Jacob Batalon) and trying his best not to let his beloved Aunt May (Marisa Tomei) know anything about his secret crime-fighting alter ego. Spending his free time honing his abilities under the guise of working as an intern for Stark Industries, the eager teenager is starting to get tired of chasing after purse snatchers and stopping bicycle thieves. Peter wants to catch major criminals doing very bad things. But with Happy Hogan (Jon Favreau) monitoring his every move and his school’s Academic Decathlon trip to Washington DC coming up soon, finding the time to take on villains looking to do actual harm to his beloved New York City isn’t exactly easy.

Enter Adrian Toomes (Michael Keaton). A blue collar construction worker who was originally tasked by New York to help clean up the wreckage from that massive alien invasion the Avengers put a stop to a few years prior only to have a mysterious bureaucratic piece of the Federal Government steal it out from under him, he’s managed to recover from his massive financial losses by selling weapons engineered from the remnants of that intergalactic technology. Peter has caught on to what it he’s been doing, and believing Stark isn’t listening to any of his concerns he’s taken it upon himself to see Toomes is stopped.

As serious as all that might sound, Watts and his creative team keep the tone of the film bouncy and light, treating this adventure as if it were the second coming of Clueless, The Breakfast Club or Mean Girls, only augmented by the appearance of a web-slinging superhero battling a mechanical vulture in the skies of the Big Apple. They’ve also gone out of their way to make this the most ethnically diverse entry in the MCU yet, Peter’s high school for exceptionally gifted youngsters a wonderful multicultural smorgasbord. The female characters, most notably Liz and Michelle, are especially interesting, all of them respected just as much for their intelligence and chutzpah as they are for their good looks and charisma. It’s funny stuff, the byplay between all the kids consistently winning, Holland and the rest of the talented cast making the most of the material at every opportunity.

Yet, there’s also no denying just how threadbare and thin the plot proves to be. The screenwriting by committee shows its hand far too often, especially where situations involving Toomes and his henchman trying to steal alien technology is concerned. There’s also a lot of coincidental comings and goings, so much so the sheer volume of them makes one hunger for the subtle halcyon days of Paul Haggis’s Crash. For those not grasping my sarcasm, that 2004 Oscar-winner is built on a foundation of coincidence, none of the events happening in that story occurring unless each character randomly comes into contact with all the other ones somewhere on the streets of Los Angeles. The same can frequently be said here, so much so the sheer volume of these interactions becomes increasingly silly, in the end diluting the emotional impact of any of the key emotional surprises a substantial amount.

But Toomes still ranks as one of the best, most intriguing and undeniably threatening villains the MCU has ever offered up to this point, his grounded reasons for turning to a life outside of the law packing a decent wallop. Even better is Holland, his performance a rollicking, energetic showcase that’s as multifaceted as it is endearing. His realizations as to what it means to be a hero pack a major punch, as do his reactions when he comes to understand Toomes as a man and not some mechanical flying predator looking to do him, his friends or his family harm. The youngster is the real deal, and as outstanding as both Tobey Maguire and Adam Garfield might have been inhabiting the role previously, Holland makes Peter Parker his own with effortless aplomb.

Sam Raimi’s Spider-Man 2 is still the best movie ever made involving creators Stan Lee and Steve Ditko’s timeless character. Heck, it’s flat-out one of the best comic book motion pictures period, so the fact Watts’s take doesn’t rise to the same glorious heights is hardly shocking. Nonetheless, Spider-Man: Homecoming is a sublime coming out party for the teenage wall-crawler. No matter where Sony or the MCU decide to have him throwing his webs next I can’t wait to be the fly on the wall watching it all play out, and here’s hoping I have just as much fun getting caught inside its sticky embrace when that inevitably happens as I did here. 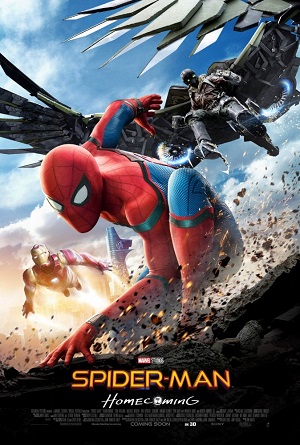