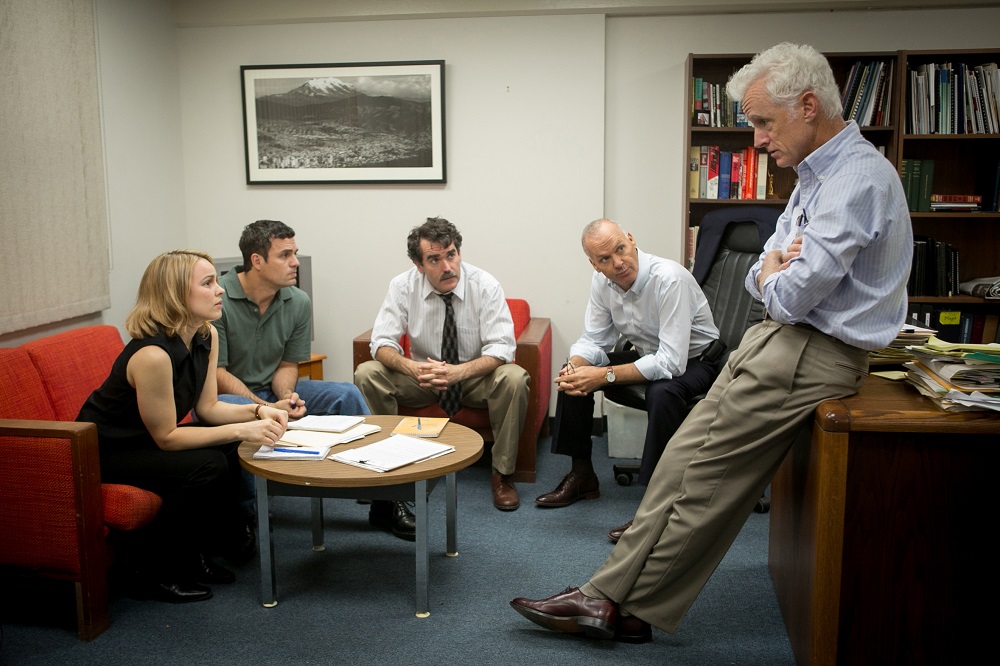 Newly installed Boston Globe editor-in-chief Marty Baron (Liev Schreiber) would like the paper’s prestigious “Spotlight” section, led by editor Walter “Robby” Robinson (Michael Keaton), to take a look at an old, still simmering story involving child sex molestations concerning local Catholic priests. These tales have been looked at before, but never in an aggressive way, and while projects editor Ben Bradlee, Jr. (John Slattery) isn’t certain there’s a story, he’s more than willing to allow his best reporters an opportunity to dig in and see what’s what. 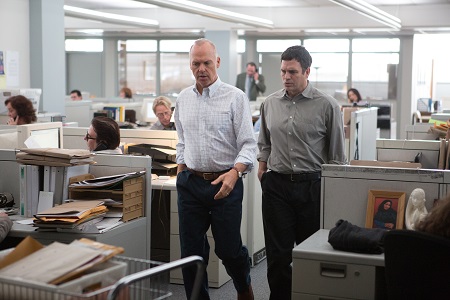 Robby’s team, Mike Rezendes (Mark Ruffalo), Sacha Pfeiffer (Rachel McAdams) and Matt Carroll (Brian d’Arcy James), seasoned journalists all, are willing, ready and able to give the available materials covering the case a good looking over, all coming to a conclusion there’s more going on than initially met the eye. Led in multiple directions, aided by one resolute attorney, Mitchell Garabedian (Stanley Tucci), while sent in perplexing circles by another, Eric MacLeish (Billy Crudup), all are aghast by what they are uncovering. They all realize they’ve uncovered something that has the makings of becoming the crime of a still young century, one that will rattle pillars, not just in Boston or in Rome, but everywhere around the globe where the Catholic Church plants a footprint.

Spotlight is stunning. Writer/director Tom McCarthy (The Visitor, The Station Agent) crafts a journalism procedural that’s one of the best I’ve seen in ages, maybe since Billy Ray’s 2003 stunner Shattered Glass, his film a meticulous, thought-provoking examination of the Fourth Estate at work that’s as timeless as it is extraordinary. Looking at the Pulitzer Prize-winning group of reporters who would uncover a scandal the repercussions of which are still being felt today, the film is a step-by-step descent into unfathomable depravity that’s unsettling on an almost primal level. Yet, the sense of hope, the feeling of justice, the knowledge that, by doing their job, this team did something, not just important, but heroic, all of this is here, allowing the film to exit on a euphoric coda that’s absolutely superb.

Comparisons to All the President’s Men are inevitable, and while I can’t say McCarthy’s latest rises to the same stratospheric heights as Alan J. Pakula’s Oscar-winning classic, a strong case can certainly be made it belongs on the same playfield. Both do a terrific job of showing journalists fighting the good fight, going through the motions of uncovering information, dealing with sources and putting the pieces of a larger puzzle together with beautiful, crystalline clarity. They also take stories that, in lesser hands, could have become something dry, maybe even tedious, and make something mesmerizing out of them, suspense born from discovery as characters learn unspeakable truths that rock them to their very core.

The movie features 2015’s most impressive ensemble, each and every one of them delivering performances deserving of acclaim. Outside of the paper, Tucci might impress the most, and while his scenes are few he infuses them with a sense of purpose and a feeling of fearless humanity that drips off of the screen. Crudup is also quite good, his character’s motivations and feelings as to what has happened, as well as what is currently going on, never entirely as they appear, the actor portraying this duality with oily self-assurance.

As for the Globe reporters, editors and staff, all are good, Schreiber and Slattery doing the most with the least out of any of the supporting players McCarthy takes the time to focus on. But it is the core group, the quartet of dogged journalists portrayed by Keaton, Ruffalo, McAdams and James who make things sing, each given room to evolve and grow as the story they’re dissecting blossoms into something beyond imagining. They’re all strong, and I’m not sure I thought any one of the foursome was better than any of the others, and while I’d maybe give Ruffalo the slight edge, that’s only because the tenacious Rezendes is deeply involved with some of the more explosive discoveries. 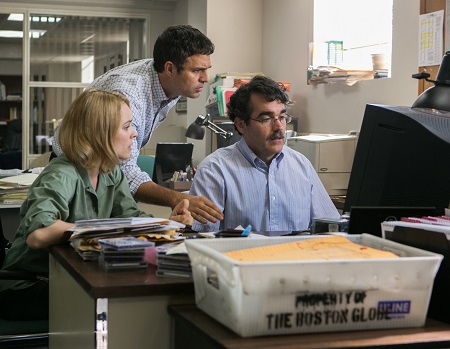 That said, my favorite sequence involves McAdams, Pfeiffer going about doing the normal door-to-door drudgery crackerjack investigative reporting requires only to suddenly find herself face-to-face with one of the priests she just happens to be researching. Her reactions, the way she so quickly and quietly comports herself back to normal after allowing the initial shock to hit her for a precious few seconds, it’s as magnificent a moment as any I’ve seen this year, made even more so by the almost blasé admission of guilt that subsequently follows.

For McCarthy, Spotlight is an across-the-board triumph. From Masanobu Takayanagi’s (The Grey) documentary-like cinematography, to Tom McArdle’s (Win Win) exhilarating editing, to Stephen H. Carter’s (Kill Your Darlings) astute production design and Wendy Chuck’s (San Andreas) lived-in costumes, the parts fit together handsomely. In fact, the only misstep might be veteran composer Howard Shore’s (Fargo) moderately dreary score, but I’m not entirely certain I’d hold to that opinion if push came to shove, the director using it with such subtle restraint my feelings on this matter could easily change with subsequent viewings.

In the end, though, it is how one relates to the core narrative on a personal level that is key to the film’s overall success. McCarthy makes this investigation personal, universal, its intimate vivisection of this complex, destructively abhorrent tale impossible to turn away from. But the real glory is how the filmmaker shapes things into a chronicle of inspiration and hope, Spotlight giving center stage to unsung warriors for truth who understood telling the story right, without embellishment, without melodramatic editorial excess, was the greatest victory of them all. 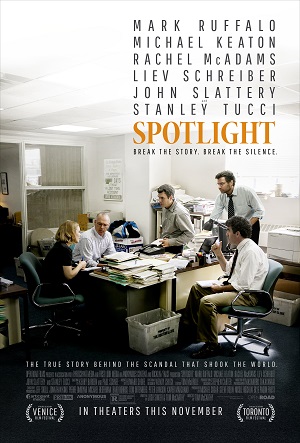