The Resistance is on the run. After their successful assault on the Starkiller base, General Leia Organa’s (Carrie Fisher) forces must now evacuate their current hideout before General Hux’s (Domhnall Gleeson) First Order armada arrives to wipe them out for good. But while the plan instigated by Leia’s most trusted commander Poe Dameron (Oscar Isaac) buys her escaping ships precious time, it does so at a massive, unforeseen cost that will make defending their small fleet difficult as their flight to a new base continues.

Meanwhile, Rey (Daisy Ridley) has arrived at the ancient Jedi temple where Luke Skywalker (Mark Hamill) has been hiding for the past thirty years. She expects that the sight of his father’s old lightsaber, plus the appearance of the Millennium Falcon and old friends Chewbacca (Peter Mayhew) and R2-D2 (Jimmy Vee), will be enough to convince him to return and assist the Resistance in their time of need. At the very least, the young woman hopes the Master Jedi will help her understand why she is so strong with the Force and that he will give her an insight into her abilities that might keep her from heading down the same path of darkness that is slowly destroying First Order firebrand, and Luke’s nephew, Kylo Ren (Adam Driver).

As we journey back into an intergalactic world begun by George Lucas in 1977, it’s best not to know too much about the basics walking into Star Wars: The Last Jedi. The eighth installment in the saga intimately connected to Luke Skywalker and his kin, picking up immediately after the events of 2015’s Star Wars: The Force Awakens came to an end, writer/director Rian Johnson’s (Looper, Brick) entry goes out of its way to bust convention and expectation whenever and wherever it can. Unlike the last film, this one uses nostalgia and one’s knowledge of this universe against the viewer, ideas as to what can happen, who can and cannot survive and where things go from here as they head into the ninth and final chapter blown into smithereens like a fourth Death Star.

All of which makes Johnson’s film the most challenging Star Wars motion picture ever made, and this includes Platoon meets The Dirty Dozen spinoff Rogue One: A Star Wars Story which has already significantly changed the game all on its own just last December. The director takes Luke into territory just about no one saw coming, making him a lone samurai full of heartache and regret more akin to heroes in Akira Kurosawa’s Yojimbo or Kagemusha than he is the dashing young champion of something like The Hidden Fortress. His interactions with Rey are the heart and soul of the film, his evolved understanding of the Force, the Jedi and what is best for the universe as a whole not exactly comforting. 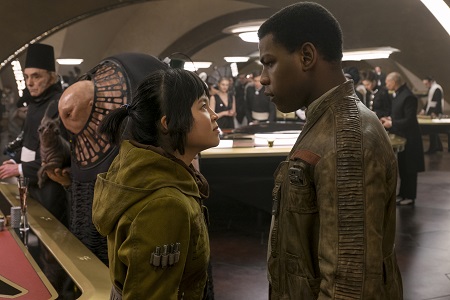 This is coupled with the fight-or-flight debate that rages within the Resistance, Poe and Leia butting heads as her view as to what is best for their forces significantly differs from his. This allows for an intriguing examination of what constitutes heroism. It also leads to a number of fantastic and fascinating variations on what is, and for that matter what isn’t, sacrifice. A number of Resistance fighters give their lives in a variety of ways, most of them selflessly and with valor. But when does hubris come into play? When is sending others into battle for a victory now only setting the stage for defeat later on? It is the balance between these two that is the debate, and much like Christopher Nolan so deftly explored with Dunkirk, Johnson’s film spends a great deal of time showing how survival during retreat can be the greatest form of heroism that will inspire others to rise up and join in the fight.

All of which makes this hardly the Star Wars most fans are used to. Even The Empire Strikes Back didn’t feel this bleakly serious, and while the bad guys did well in that 1980 classic, it was still clear to all watching that Luke, Han and Leia would find a way to lead the Rebel Alliance to victory sooner rather than later. Here, while this is certainly Rey’s story going forward, while it is obvious Poe, ex-Stormtrooper Finn (John Boyega) and newcomer Rose Tico (Kelly Marie Tran) will be the face of the Resistance as Luke and Leia are pushed to the background, the idea that they all will make it through to the end of 2019’s final chapter is an open question.

Not that Johnson has gone all that far away from Lucas’ original template. As dark as things get, as dangerous as it becomes for Rey, especially as she figures out what there is to know about Kylo Ren and whether or not the emotionally self-destructive son of Han Solo and Leia Organa can be redeemed, her journey still isn’t without humor, energy and wide-eyed excitement. All of the stuff between her and Luke is incredibly strong, their conversations the foundation upon which everything else in the movie is built upon. A delightful energy fuels their scenes together, all of which allows the story’s climax to resonate with a startling, unexpected power it never would have been able to achieve without their combined efforts.

As for the rest, much of it works splendidly, most notably an effervescent jaunt away from the retreating fleet by Finn and Rose as they attempt to find a cybernetic genius (intriguingly played by suitably mysterious Benicio Del Toro) key to helping the Resistance escape from the First Order. But the actual retreat itself? As well-acted as these sections are, as key the moments between Poe, Leia and the quiet, intellectually astute Vice Admiral Amilyn Holdo (Laura Dern) prove to be, there is a turgid, melodramatic awkwardness to some of these conversations that can grow a little tiresome. It’s as if Johnson watched a bunch of Stanley Kramer classics like On the Beach or Judgment in Nuremberg and felt the need compose high-minded debates that echo those the nine-time Oscar nominee was undeniably most known for, and as such there were moments where I felt I was being lectured to by these characters more than I was anything else.

Even so, if it wasn’t obvious after the technical virtuosity of his three low budget gems Brick, The Brothers Bloom and Looper, Johnson has only gotten better with every outing as far as his staging of action and suspense sequences are concerned. Presented an almost unlimited budget, the director does not fail to amaze, and for a series that has seen so many wonders and delights, the director still finds a way to offer up a number of new ones here. Johnson also continues a trend begun with Gareth Edwards’s Rogue One just last year in that The Last Jedi is visually stunning on a level we’re just not used to as it pertains to Star Wars, the eye-popping images he and cinematographer Steve Yedlin (Carrie) come up with frankly staggering.

But the biggest thing this eighth chapter does is change where things go next in a fundamental way. As stated, by the time things end it is an open question as to whether or not the Skywalker journey has reached its conclusion. Rey is the new central figure around which everything must now revolve, her continuing dance of death with Kylo Ren the key component moving forward. It is there that Johnson makes his boldest statements, the director taking this intergalactic soap opera into a new, undiscovered part of the galaxy where up is down, right is wrong and everything we thought we knew about this series is flung seven steps in the opposite direction. This has me excited. It also has me loving Star Wars: The Last Jedi more than I initially realized as I exited the theatre, the Force strong with this sequel even if the ways in which it is moving prove to be more mysterious than they’ve ever been before. 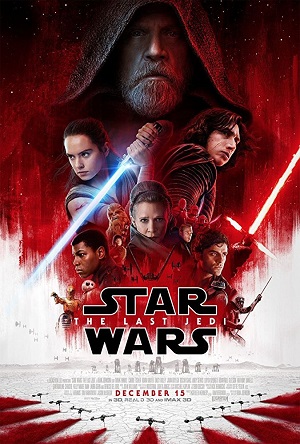