Steve Jobs is not a traditional major studio Hollywood biopic by any stretch of the imagination. Resembling more a Broadway play as if it were written by David Mamet and Paddy Chayefsky working in tandem, presented like one of Louis Malle’s astonishing Andre Gregory collaborations, director Danny Boyle and screenwriter Aaron Sorkin have crafted a one-of-a-kind cinematic sensation worthy of a standing ovation. This is a film driven by the rat-a-tat-tat nature of its dialogue, each verbal twist and turn a thrilling mystery as to what is going to be said next and who is going to be lucky enough to get in the last word. 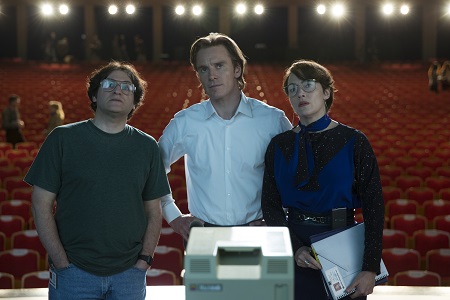 The film is split into three sections, each set minutes before various important product launches Steve Jobs (Michael Fassbender) is front and center to introduce. The behind-the-scenes mayhem is kept to a minimum thanks to the efforts of marketing maestro Joanna Hoffman (Kate Winslet), the harried public relations wiz and close Jobs confidant, the one who has to monitor access to her charge before festivities begin. During the first event, the launch of the Macintosh personal computer in 1984, the most interesting guest inside the dressing room is Chrisann Brennan (Katherine Waterston), the Apple exec’s ex-girlfriend there to push him to recognize his 5-year-old daughter Lisa (Makenzie Moss) as his own and finally step up to the plate financially.

Other guests include John Sculley (Jeff Daniels), the man coerced to leave Pepsi in order to come to Apple as CEO, and programmers Andy Hertzfeld (Michael Stuhlbarg) and Steve Wozniak (Seth Rogen), the latter the co-founder of the company responsible for changing the face of personal computing while tinkering in a garage alongside Jobs. They aren’t the only people Joanna allows into the room with her boss, but they are the most important ones, each person adding input and insight as they make their respective cases for what they’d like him to say to the adoring throngs loudly cheering in the adjoining auditoriums for each respective product launch.

Sorkin, freely adapting Walter Isaacson’s best-selling biography of the Apple icon, has crafted a sensational script, one that’s potentially even better than his Oscar-winning one for David Fincher’s The Social Network. As mentioned, events are entirely driven by dialogue, things progressing forward with urgency and haste solely through the verbal interactions. More, the level of insight and understanding he is able to generate as to who Jobs was, his drive, his tenacity, his geocentricism, his self-awareness and, yes, his genius, all of that and more is on display. It’s a no-holds-barred accounting of the man that attempts to dig below the surface in order to discover universal truths, not all of which are savory, whether it succeeds or not directly tied to the viewer’s own idiosyncratic point of view.

Boyle is working at the top of his game, the man behind films as diverse as 127 Hours, Millions, Trainspotting and the Academy Award-winning Slumdog Millionaire navigating this untraditional terrain with sparkling, invigorating efficiency. The way he separates the three product launches (the NeXTcube in 1988 and the iMac in 1998 join the Macintosh as the other two) borders on dazzling, how he and his cinematographer Alwin H. Küchler (Sunshine) visually identify each shift in time both ingenious as well as completely organic to the story itself. It’s one of the most technically accomplished motion pictures released to theatres in all of 2015, yet it’s also just as doubtful most will recognize this truth, the inherent theatricality of the piece potentially keeping some from noticing.

None of which would matter a lick if the performances were not up to snuff. Thankfully, everyone in the cast, every single person, no matter how big or small their respective part might be, is just wonderful, the most surprising of whom might be Rogen as Wozniak, the veteran comedian showing a depth and a range he hasn’t before now. But as good as he might be, and he is wonderful, the real standouts are Fassbender, Winslet and Daniels, all three giving performances as grand and as magnetic as anything they’ve ever given. It’s no great stretch to imagine that each could very well win Oscars for their turns, Winslet in particular subtly and cunningly becoming the film’s heart and soul as things progress to their rightfully open-ended conclusion. In most respects Hoffman is the voice of Jobs’ conscience, the complicated Jiminy Cricket sitting on Pinocchio’s shoulder doing her level best to steer him in as decent and as humane a direction as possible.

I’m not an Apple historian. What I know about Jobs and his time with the company amounts to little (most of it tied to my recent watching of Alex Gibney’s documentary Steve Jobs: The Man in the Machine). With that in mind, I can’t comment on how accurate a representation of the man at the center of all of this is. What I can say is, from a filmmaking perspective, from an entertainment standpoint, Steve Jobs is an exhilarating spellbinder, moving at a fervent pace as it attempts to show genius and all that comes with it – the good, the bad and the decidedly in-between – as intimately as it can. In the end the orchestra being conducted are the audience’s own emotions, Boyle and Sorkin the clever maestros making beautiful music out of them for everyone to enjoy. 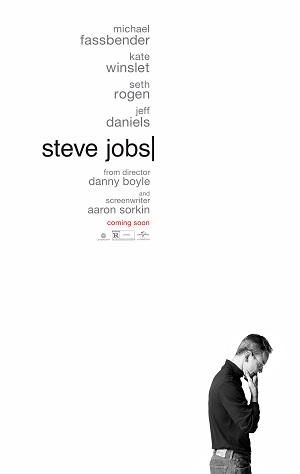