Some movies just sneak up out of nowhere. That’s what happened to me as it pertains to writer/director Jessica Swale’s lovely debut Summerland. I was stunned by just how moved I was by the deliciously melodramatic yarn the filmmaker was spinning, each of the story’s pieces snapping into place alongside its counterpart with ease. It’s the type of motion picture that gives me hope things are going to turn out all right, not just for the characters living inside this tale, but in the here and now for all of us as well.

Spanning roughly five decades between the 1920s and the 1970s, with the majority of the narrative transpiring during the early 1940s when German bombers were pounding London on a nightly basis and flocks of children were sent into the countryside for their own protection, Swale’s drama shattered my heart and then filled it back up again with joy. This is one of the best films I’ve had the pleasure to see in 2020, and I have this sneaky suspicion it’s also one I’m going to be revisiting multiple times for many years to come.

Summerland has the appearance of being a standard story of a cantankerous loner who has their views on life and community changed thanks to the presence of a precocious child. In reality, Swale has far more on her mind. An award-winning playwright, the filmmaker’s theatrical roots are readily apparent courtesy of the dexterous way she keeps control of her sprawlingly convoluted scenario. It’s impressive stuff, and as things progressed I realized I couldn’t have taken my eyes off the screen even had I wanted to try.

The weight of the contrivances could easily have signaled certain doom. Thankfully, the director does not allow this to happen. Even when her story is at its most outlandish it is still possible to see how events could transpire exactly as they are depicted. The clues are present throughout and not randomly pulled out of nowhere. This allows every twist to have a naturalistic authenticity and each surprise to have an honest urgency, making the overall film itself all the more emotionally magnificent in the process.

Alice (Gemma Arterton) is a writer working on a book debunking pagan folklore utilizing modern scientific methods. She lives on her own off the coast of Sussex, most of the residents of her tiny village focused on the world war that has brought German bombers to British skies. But Alice would rather obsess over how an ancient castle could appear to be floating on a sea of fluffy white clouds. She is content to remain locked inside her countryside bubble, and if that means her neighbors think she’s some sort of deranged witch so be it.

Enter Frank (Lucas Bond). He is a 14-year-old evacuee from London who the British War Office has inexplicably sent to live with Alice. She wants nothing to do with the boy, insisting local school superintendent Mr. Sullivan (Tom Courtenay) find a different living situation for him. But over time the pair discover they have much in common. Frank is fascinated with Alice’s theories, while she begins to take increasing delight in his inquisitive mind. It’s an unlikely friendship, but also one both desperately needs, and as days turn into weeks neither is no longer certain they want Mr. Sullivan to continue his search for a new home for the teenager.

It’s a simple enough setup, one that recalls WWII melodramas of the 1940s and ‘50s. It’s the type of situation a filmmaker like Douglas Sirk or William Wyler would have vaulted over every obstacle to direct. But there is also an inherent soapiness to events that’s apparent the moment Frank ends up standing in Alice’s doorway, and as such I couldn’t help but be slightly trepidatious that schlocky pabulum was at any moment going to overwhelm the proceedings.

But Swale is a cagey and intelligent storyteller. Several layers lurk underneath the surface of her scenario, the film drifting back and forth through time as it examines Alice’s friendship with a fellow coed (deftly underplayed by a gorgeous Gugu Mbatha-Raw) during the late 1920s before flashing into the early 1970s, the author (now portrayed by the great Penelope Wilton) putting the finishing touches on her latest book.

These moments are intimately tied to what is happening between Alice and Frank during WWII. There is a reason they have been brought together, one neither of them understands let alone suspects. The connection they develop is pure, heartfelt and most of all genuine. When they make mistakes, when they try to keep tragic truths unspoken even when it turns out to have been wrong to do so, these actions come from a place of selfless love and affection for the other that makes forgiveness, while undeniably still difficult, practically inevitable.

While comparisons with Arterton’s fellow WWII melodrama, Lone Scherfig’s Their Finest, are potentially unavoidable, I can’t say they are entirely apt. Even though both films are set at roughly the same time, each follows a decidedly different path to their heartwarming and empowering conclusions. More, Arterton’s performances couldn’t be more different. While she is exquisite in both motion pictures, Alice is far more introverted, unkempt and rough around the edges than burgeoning screenwriter Catrin Cole ever was.

There’s so much more I’d like to say about Summerland but I find myself thinking it might be best to remain quiet to keep from spoiling the luminous emotional purity Swale has in store for the viewer. While some will undoubtedly complain the filmmaker’s script is too contrived, I can’t say I agree with that assessment. No matter how it might appear at first glance, the coincidences that bring Alice and Frank together are nothing more than a mirage camouflaging a hidden universal truth, one so untainted, so sincere, so distinctively human I’m tearing up just thinking about it again right now. 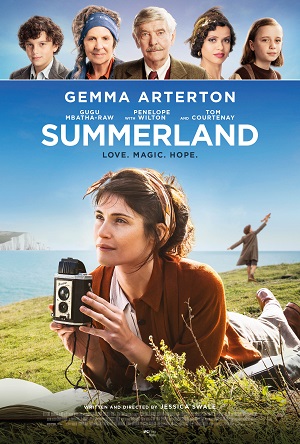