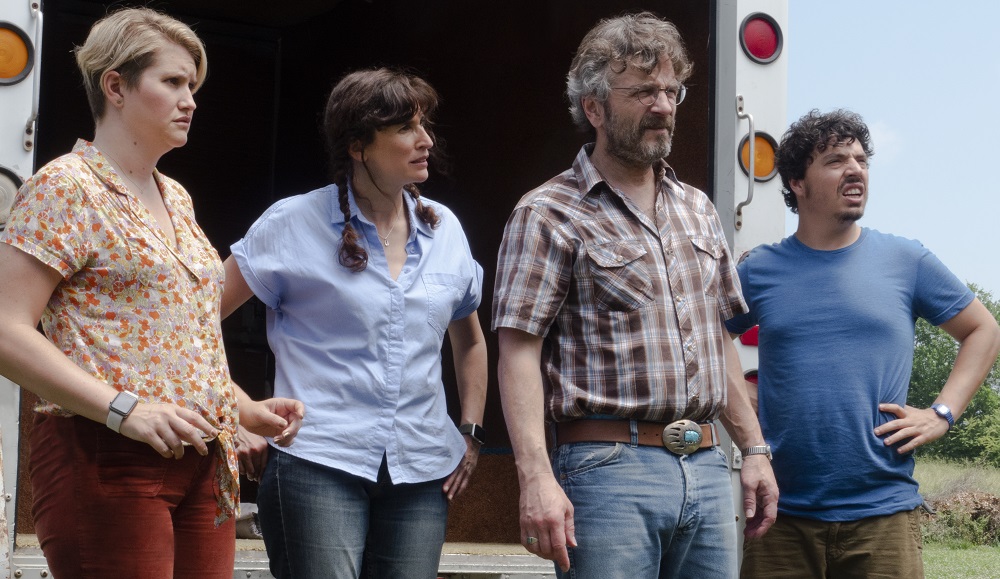 Shelton’s Sword of Trust a Hopeful Flight of Historical Fancy

Alabama pawnshop owner Mel (Marc Maron) assumed today was going to be fairly normal with few surprises, his only annoyances going to be involving his flightily inattentive employee Nathaniel (Jon Bass) making some sort of nuisance out of himself. But first walks in his ex-girlfriend Deirdre (Lynn Shelton) claiming she’s finally clean and looking for money to supposedly help pay for repairs to her car so she can drive to a job interview. Yet as emotionally shattering as this encounter is, it is trumped when jittery couple Mary (Michaela Watkins) and Cynthia (Jillian Bell) enter the store carrying a perfectly preserved Civil War-era Union Army sword.

At first their transaction appears to be relatively straightforward. They’d like to pawn the sword and are want to know its value. Things don’t get strange until they attempt to explain to Mel the item’s history. In a letter given to her upon his death, Cynthia’s grandfather states the sword belonged to Union General Philip Henry Sheridan, and he gave it up to the Confederate Army when he surrendered at a heretofore unknown battle. This means the North lost the Civil War and the South, in a massive coverup, were victorious. While neither Mel, Mary, Cynthia and Nathaniel believe any of this, the sword still leads all four of them into a murky underworld of Southern conspiracy theories and the hot collector’s market for “Prover Items,” historical artifacts that a determined few think will change history, and they’re willing to pay handsomely in order to get their paws on them.

While maybe not quite up to the glorious heights of 2011’s Your Sister’s Sister, writer/director Shelton’s latest low-key, character-driven comedic frolic Sword of Trust is very entertaining. Co-written with “A.P. Bio” creator Mike O’Brien, the movie is an enjoyable what-if lark that has a lot more on its mind than it initially appears to be the case. Anchored by a superb performance from comedian, author, podcaster and essayist Maron and featuring wonderful supporting works by all three of his primary costars, especially a delightfully anarchic Watkins, this is a fast-paced O. Henry meets Mark Twain meets Tom Wolfe-like absurdist lark that sent me out of the theatre smiling.

Shelton’s fable works because the characters feel real. While the situation is undeniably ludicrous, and while each individual is their own uniquely eccentric self, the emotions fueling their various actions and interactions are all entirely genuine. There is real love, affection, pathos, pain, curiosity and respect running through the lot of them, the ways they end up relating to one another, even with a handful of understandable misgivings at the start, is always nothing less than believably authentic. In spite of their obvious differences. Mel and Mary strike up an affecting bond, the duo understanding one another in ways that dig deep and go far beyond what is being said by either of them out loud.

In a role tailormade for his uniquely sardonic skills, Maron is wonderful. He brings a world-weary cynicism to his performance that is mixed with a buried form of emotionally naturalistic optimism I found consistently endearing. Maron says so much by doing so little, his one scene with Shelton a shattering affair where the particularities of their relationship are irrelevant and all that needs to be known passes back and forth between them silently with crushingly internalized specificity. The whole scene is an early gut-punch that sets the stage beautifully for all the surreal historical peculiarities to come, and I can’t imagine the movie would have been near as touching as it ultimately proves to be without him as the main character.

For me, the most interesting aspect of what Shelton and O’Brien have come up with is how their story so cleverly analyzes how conspiracy theories like the one presented here can blossom and grow even when their innate ridiculousness is obvious for everyone to see. The individuals this quartet encounter are all looking for a number of different things in their respective lives, and the idea of a Southern victory in the Civil War ends up becoming a defining reason why their own dreams have remained unrealized. But Shelton refuses to ridicule these individuals and keeps herself from painting them as fools unworthy of redemption. Instead, she and O’Brien craft them as sad, lonely human beings Mel, Mary, Cynthia and Nathaniel can learn something about themselves from, each discovering hidden truths about their own biases, superstitions and beliefs that maybe need to be rethought once their surreal adventure to sell this sword comes to its conclusion.

Even with that being so, it isn’t like Sword of Trust ever digs as deeply as it potentially could have. The majority of its major complications are resolved rather easily, and there isn’t a lot in the way of loose ends left untethered by the time the screen fades to black. Yet it all feels honest and real even if these outcomes are hardly surprising and arguably a little too tidy. Mel learns something about resilience and hope, and the sight of him walking down the street carrying a mysterious bag of groceries is oddly comforting. I was happy to see that there were cracks lingering inside the foundation of his ingrained pessimism, his willingness to offer his silent trust to those who have not even asked for it an optimistic turn of events everyone watching the film owes it to themselves to try and emulate. 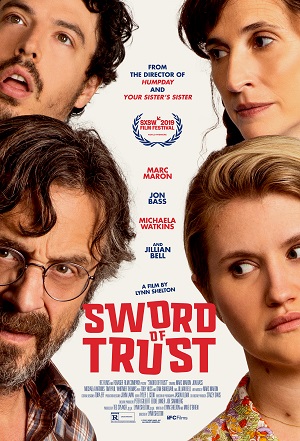