Hans (Jeroen Spitzenberger) is anxious to hit the road. He’s not looking forward to hours on the freeway traveling to his parents’ house for a family get-together, and he’s tired of waiting for his wife Diana (Anniek Pheifer) and two daughters Milou (Roosmarijn van der Hoek) and Robine (Liz Vergeer) to get in the car.

Later on in the day, Hans’ anger boils over when they get stuck behind a white van. At a busy rest stop, he comes face-to-face with that vehicle’s driver, a quietly stern exterminator named Ed (Willem de Wolf), who insists Hans apologize for his bad behavior on the road, insinuating that this husband and father is showing himself to be a poor example of human decency to his two little girls.

In writer-director Lodewijk Crijns’ tense thriller Tailgate (Bumperkleef), refusing to accede to Ed’s simple request is easily the worst decision Hans could make. Turns out, this exterminator doesn’t just annihilate insects and rodents. He also utilizes his noxious and dangerous chemicals to neutralize those he considers to be human pests, and right now, Hans has vaulted to the top of his list of those in need of deadly corrective measures.

This film has me split right down the middle. On the one hand, it’s easily the most intense motion picture I’ve watched this year. My anxiety levels went through the roof. Ed is a spectacular villain. He’s like J.T. Walsh’s Breakdown baddie, John Jarratt’s Wolf Creek serial killer, and the nameless, faceless, four-wheeled marauder stalking Dennis Weaver in Steven Spielberg’s Duel all in one. The guy is terrifying, and the talented de Wolf delivers a performance for the ages as this film’s unstoppable protagonist.

On the other, I despised Hans. While I am certain this is the way Crijns wanted the character portrayed, Spitzenberger gives one of the more relentlessly unlikable turns as the central protagonist in a thriller revolving around a cat-and-mouse battle between hunter and prey that I’ve frankly ever seen. While I appreciate that the director wants to drop the viewer right in the middle of a meat grinder mostly free of context, in this case I can’t say this stylistic choice worked very well.

Why? Simply put, I wanted the guy to die. No, Hans and his family don’t deserve what happens to them; that goes without saying. But while Diana, Milou, and Robine are almost entirely innocent and free of blame, the way Hans is presented, a strong case could be made that a lesson in manners is exactly what this guy needs. At every turn, he makes one bad decision after another, and at no point did I feel anything close to sympathy for the man.

What’s impressive is that, even with my general dislike of Hans, Tailgate remains an impressively visceral roller-coaster ride. Crijns dares the audience to look away, and from the moment this unassuming family crosses paths with the deranged exterminator, the filmmaker presses down hard on the accelerator and then refuses to lift his foot. There is no braking, and the all-encompassing horror becomes increasingly smothering the longer the pursuit continues.

It all comes back to Ed. This guy is something else. While the overall movie is a technical marvel, shot and edited to perfection by Bert Pot and Bert Jacobs, the kinetic majesty of what Crijns and his team manufacture would mean nothing without de Wolf’s calmly unhinged magnificence. Tailgate introduces a villainous vehicular stalker for the ages, and the next time I’m behind the wheel I’ll be on my best behavior just to play it safe. 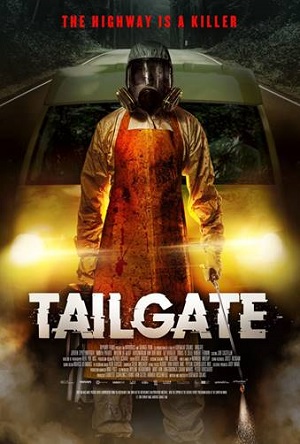