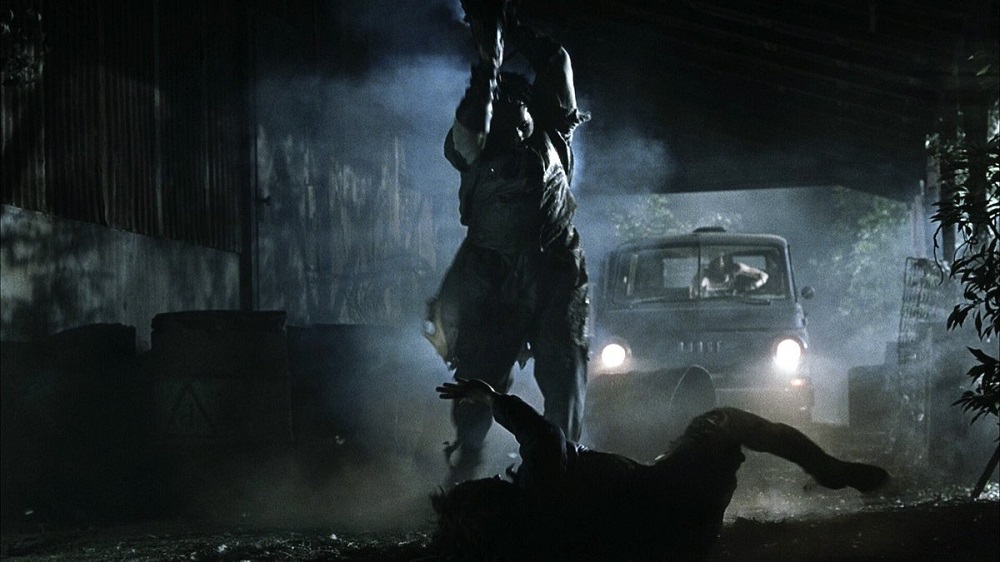 An item that could go right to the top of a “pointless things to do” list? Remaking Tobe Hooper’s 1974 cult horror classic The Texas Chain Saw Massacre. Yet that is exactly what producer Michael Bay and New Line Cinema do, and in something of a major surprise, it’s not half bad.

Loosely inspired by the grotesque story of serial killer Ed Gein, Hooper’s fictionalized original surmised there was an entire family of inbred Texas cannibals nefariously picking off road-weary travelers unlucky enough to come across their dilapidated abode. A bit dated, there are still numerous flashes of grotesque genius and moments of sheer visceral terror that rightly keep the film high in the genre’s pantheon. Hooper’s skill behind the camera is above reproach, the director setting up a Grand Guignol of the repellant that still holds up.

Bay, known for action-heavy behemoths like The Rock, Armageddon, Pearl Harbor and Bad Boys II, definitely makes sure this remake is an A-list affair with a suitable budget to match. Four rising stars – Jessica Biel of the WB’s Seventh Heaven, Erica Leershen of Anything Else and Hollywood Ending, Mike Vogel of Grind, Eric Balfour of Six Feet Under and 24 – all get a chance to scream their guts out, and all are more than up to the challenge presented to them.

The basic story remains the same. In 1973, five young college-age kids are driving through Texas, picking up a strange hitchhiker along the way. Through his actions, they are led to a rundown house populated by a surreal clan of deformed crazies. One by one, each is murdered in brutal, vicious fashion, their flesh to be used in all manners of monstrous ways. In the end, only one of these five still stands, pitted in a battle of survival against the most brutal member of the family: the chainsaw-wielding Leatherface (Andrew Bryniarski).

While lacking the kinetic intensity of its predecessor, this incarnation of The Texas Chainsaw Massacre gets the job done. It is shot in elegant, twisty fashion by cinematographer Daniel Pearl, and composers Steve Jablonsky and Mel Wasson – the latter responsible for the movie’s eerie ambient sounds – make good use out of Hooper and Wayne Bell seminal score from the original. The dank and menacing production design crafted by Greg Blair is outstanding. I also loved that the team behind the remake reused the unhinged, wheezy-thwack transition/dissolve sound effect from Hooper’s original, and on its own this was more than enough to generate goosebumps.

As great as all of this is, this technical virtuosity is also part of the problem. Director Marc Nispel isn’t a slouch behind the camera, and it is clear he’s done his homework. But this also inadvertently makes things appear slightly overly rehearsed and somewhat routine. Scenes of nubile young bodies unceremoniously slammed upon hanging meat hooks are still a shock to the system, but it takes more than eviscerated flesh to generate real scares or sleepless nights. Hooper may not have had the budget this remake has, but there is such a pervasive feel of wild abandon going and take-no-prisoners moxie in his masterwork that the overall ambiance he created was nothing less than intoxicating in its overwhelming sense of all-encompassing terror.

But there’s still lots to admire and enjoy here. R. Lee Ermey (Full Metal Jacket) may be typecast as the sadistic Sheriff Hoyt, but that doesn’t mean he still didn’t get under my skin. His interrogation of one of the scared travelers after they witnessed an unspeakably horrific is unsettlingly unbearable, while a scene later on with the scantily clad Biel set my teeth on edge something fierce and I could honestly feel the entire theater cringe in collective agony.

Nispel showcases a gift for misdirection and cleverly genuine jump scares, producing the desired “eeks!” and “acks!” with John Carpenter-like precision. I also liked how screenwriter Scott Kosar cleverly uses facets of all four Texas Chainsaw films – not just relying upon the Hooper/Kim Henkel original for inspiration – and melds them into a ghoulishly delicious stew of gory homage. Heck, John Larroquette even returns as the unseen narrator, coldly recounting the sanguinary tale as if reading off a nightly news teleprompter to a stunned television audience.

For those unfamiliar with the original, or too young to appreciate how far ahead of its time it was, this remake will likely scare the bejesus out of those members of the audience. Like Hooper’s version, there isn’t a ton of exposition, Nispel getting to the nitty-gritty of this dismembering tragedy as quickly as he can. The Texas Chainsaw Massacre has never about trying to explain the nature of evil. It wants you to look these demonic figures in the eye and see how long it takes to flinch. My bet is said flinching will happen long before the chainsaw purrs. 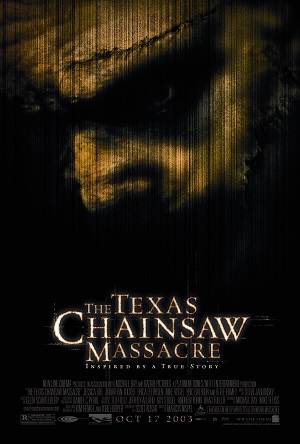