To the Arctic is the weekend’s second nature documentary seeing a nationwide release, the 3-D feature from acclaimed director Greg MacGillivray (The Living Sea, Dolphins) and writer Stephen Judson (Everest) hitting IMAX theatres today. But unlike Disneynature’s Chimpanzee, which admittedly can get overly cutesy and is nearly undone by its jokey narration and the insistence to tack on a family-friendly storyline fit for adolescent consumption, this film doesn’t offer up anything we haven’t heard and seen before. More than that, at barely 40 minutes it hardly runs long enough to do anything more than showcase some truly glorious 70mm IMAX images and tell its audience that climate change caused by humans is bad, neither of which make the purchase price of a ticket worthwhile.

Pity, because the movie is gorgeous. Visions of the Arctic tundra, the vast mountains, the gigantic glaciers, the oceanic depths, all of that and more have never looked more stunning. Breathtaking scene follows breathtaking, eye-popping scene, each one seemingly better than the next as MacGillivray and his crackerjack team go out of their way to showcase this brutal and unforgiving landscape in all its beauteous fury.

But as an examination of climate change and as a look at the wildlife residing in the Arctic Circle the movie almost can’t help but fail. Its focus is so large, moving from Polar Bears to Caribou to Sea Lions to wild birds before circling back to the Polar Bears, that it never spends enough time on any one species to divulge information most viewers won’t have at least passing knowledge of beforehand. It recycles elements from past Arctic documentaries and does so as if the words being said were brand new, its central themes failing to resonate because of this.

Still, when MacGillivray and company concentrate on the Polar Bears, when they keep their eye fixated on a mother attempting to protect her two cubs, To the Arctic does showcase moments of ebullient splendor that captured my attention. I just wanted more than recycled platitudes, information more dynamic and complex than what I could learn watching the National Geographic Channel or from an episode of PBS’ “Nature.” I didn’t feel like I learned anything surprising or new, and for a documentary that sells itself on delivering just that and more the letdown I felt afterward sadly was almost preordained. 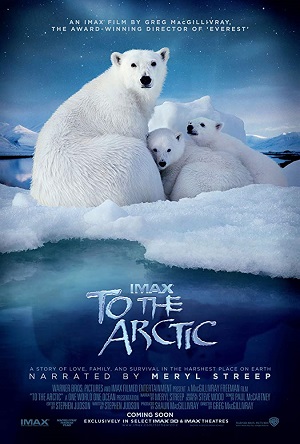