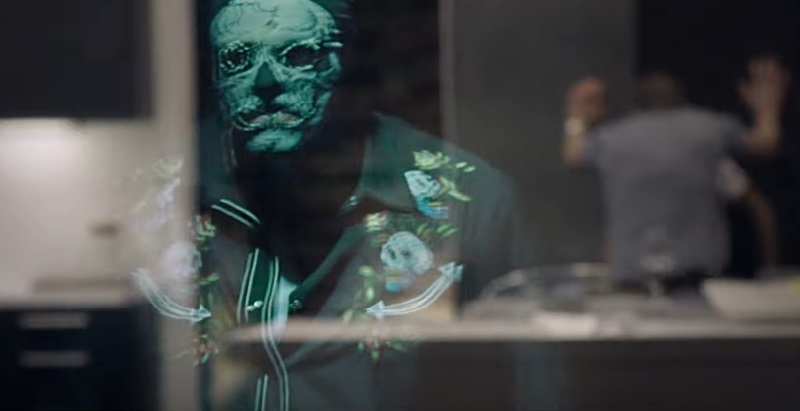 Sarah (Angela Trimbur) and her somewhat estranged husband Joseph (Zach Avery) have left the city for a weekend getaway. They have rented a secluded house in the middle of nowhere in order to relax with friends Estelle (Janel Parrish) and Victor (Jonathan Howard). The two women are childhood besties from way back, and at the moment Sarah needs Estelle more than she ever has, and even though Joseph wishes this vacation would have been just the two of them, he also understands that his wife’s emotional needs right now are more important than his own.

Not that this reunion of the foursome hasn’t been a bit on the bumpy side of the equation. Turns out, Victor is something of a textbook abusive boyfriend, and from the moment he walks through the door it feels like he’s saying all the wrong things, drinking too much alcohol and snorting way more cocaine than he should be. But where this is initially annoying it quickly turns problematic when, well after midnight, a strange, quirky little woman (Fairuza Balk) shows up on the doorstep claiming to be a neighbor of the homeowners Sarah and Joseph have rented from. There’s something off about her, a disquieting, if still moderately perky, eccentricity that’s almost too forcefully obvious to be entirely believable. Victor, in particular, wants this woman to exit the house, and if his friends aren’t going to toss her out then he’s not above belligerently doing so himself.

In the violent Trespassers, the nightmarish events that Victor inadvertently puts a start to are just the tip of the iceberg as far as this wild, blood-splattered evening for Sarah and her friends are concerned. It’s also part of the problem as it pertains to director Orson Oblowitz and screenwriter Corey Deshon’s tightly-wound thriller. They cram a heck of a lot into their story’s overly convoluted plot, and by the time the thugs wearing skull masks brandishing machetes show up things have already dived so far off the deep end their presence is just one more thing to add atop the massive anvil that’s been smooshing the narrative for most of its scant 88-minute running time.

Not that Oblowitz does a poor job maintaining tension or assembling his tale into a reasonably easy to watch whole. The film is nicely shot in a series of lush view, vibrant whites and piercing reds by Noah Rosenthal, the cinematographer balancing darkness, shadow and intermittent light sources beautifully. It is all also exceedingly well edited by Brett Solem, and there was never a point where I lost track of where the characters were, what was going on and what the key components of the story were at any given time. Oblowitz never allows the pace to drag and smartly keeps the majority of his focus on Sarah, and while inherent sensationalistic aspects did wander into the proceedings to the filmmaker’s credit he chooses not to dwell on them in a way that feels unnaturally exploitive.

But other than Balk’s unhinged, goofily exuberant performance, and even though there are about seven different stories going on at any one time, there were scant few surprises as far as I was concerned. There was also an unnerving cruelty to certain character interactions that I found aggressively distasteful, and a handful of revelations never emotionally registered with me as I assume they were meant to. The majority of the characters in Deshon’s screenplay weren’t ones I wanted to spend that much time with, and other than Sarah I had to look long and hard to find anything approaching a redeeming quality in just about any of them.

Still, the home invasion aspects of this tale are handled fairly nicely, and there’s one extended battle between Joseph and one of the masked attackers near the home’s lavish backyard pool that overflows in pulse-pounding adrenaline. There’s also a nice, devilishly sly supporting turn from veteran character actor Carlo Rota (“24,” Brick Mansions) I’d love to get into the nuts and bolts of. Unfortunately, doing so would require spoiling many of the story’s more insidious secrets, and as I’m not about to do that just know that once his character makes an entrance the actor’s cagey malice elevates the anxiety of what is going on for Sarah and her friends a substantial amount.

Not that this is enough to warrant searching out Trespassers to give it a look. As good as he or Trimbur might be (and she is excellent, The Final Girls star showcasing a haunted anguish that took me by genuine surprise), neither of them raises the film to a level that makes paying more than a couple of bucks to watch it worthwhile. It passes the time, and not much more than that, and when it hits Netflix, Hulu or some other streaming service I wouldn’t begrudge anyone from turning it on and seeing what they think of Oblowitz and Deshon’s home invasion nightmare for themselves. Other than that, I have little more to say. 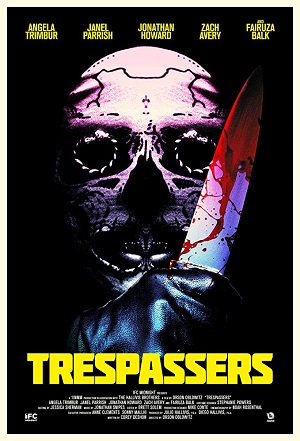