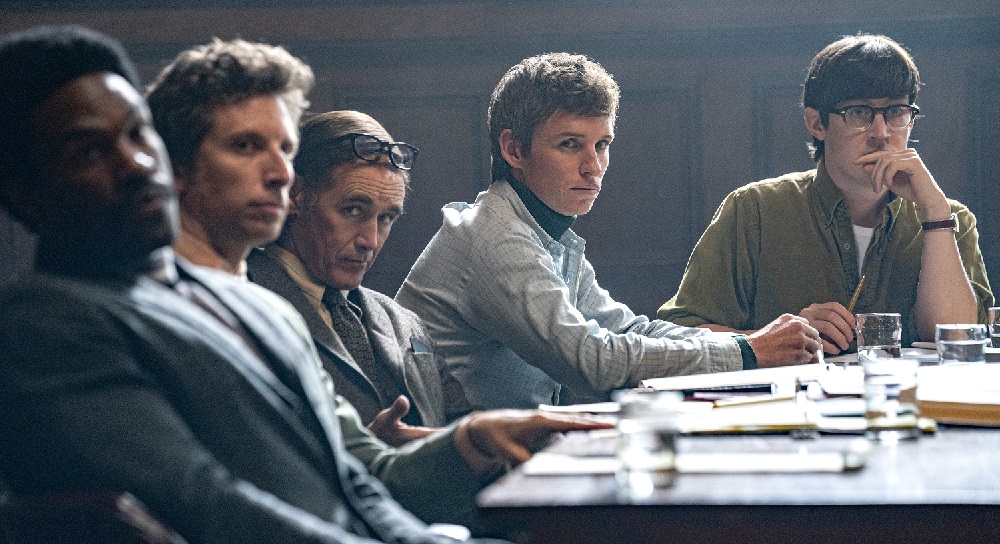 It feels obvious to state that Aaron Sorkin’s The Trial of the Chicago 7 is a bit on the timely side as far its release this weekend is concerned. Hitting Netflix less than three weeks before the Presidential election on Nov. 3, the parallels between the 1969 political show trial of the eight men charged for instigating the riots during the 1968 Democratic Convention in Chicago and what’s been happening in streets across the country today aren’t exactly subtle.

Many viewers are going to read much of what happens in this film to be a commentary on the current political situation in the United States, and that’s just fine. For my part, I went into watching this one sadly knowing precious little about these historical events other than bits and pieces we went over in one of my introductory Political Science classes when I was a freshman at the University of Washington. The riots and how they started? How newly elected President Richard Nixon’s Justice Department was able to find a way to charge this group of men of crossing state lines to start a riot? The shocking ineptitude of Judge Julius Hoffman (Frank Langella)? Most of this was new to me, so as dramatic reenactments of semi-recent history are concerned to say my interest was piqued would be an understatement.

If only Sorkin the writer had found someone other than Sorkin the director to handle his script. While a good, highly engaging film filled with sublime moments, there are still tons of little hiccups that kept me from falling completely in love with this one. There is a heavy-handed didacticism to the material that can feel a little smothering. Very little about this presentation is anything close to understated, and there are moments throughout where it’s somewhat clear Sorkin is attempting to channel his inner Robert Mulligan (To Kill a Mockingbird) or Rob Reiner (A Few Good Men) and failing to do so.

Then there is the ending. Much like with Sorkin’s directorial debut Molly’s Game, this one drops the ball right at the end. Thankfully, also like that one the positive aspects of this production are so voluminous this egregious, almost insultingly mediocre and blatantly preachy misstep isn’t as disastrous as it could have been. Still, from Daniel Pemberton’s (The Man from U.N.C.L.E.) smothering score to the overblown framing of this histrionic denouement, I cannot say the climax did all that much for me.

Yet The Trial of the Chicago 7 is still pretty dang entertaining. Sorkin’s dialogue is frequently killer, and in the hands of an eclectic all-star cast featuring the likes of Langella, Sacha Baron Cohen, John Carroll Lynch, Eddie Redmayne, Yahya Abdul-Mateen II, Michael Keaton, Jeremy Strong and Mark Rylance, it’s all delivered with such pinpoint precision I was oftentimes in awe. Cohen is surprisingly great as Abbie Hoffman, while Redmayne brings Tom Hayden to life with startling effectiveness. Lynch (as Mobilization to End the War in Vietnam leader David Dellinger) has a couple of terrifically memorable scenes, specifically one where the revered pacifist loses his even-tempered cool in front of his family and the look of shame that crosses his face is nothing short of devastating.

The best of this talented bunch end up being Rylance and Strong. The former plays defense attorney William Kunstler, his battle of wills with Judge Hoffman a thing of exasperating beauty. As for Strong, he completely disappears into his portrayal of Hoffman’s best friend and fellow comedic iconoclast Jerry Rubin, and it took me half the film to realize it was him in the role. His performance is a constant revelation, his pained, mournful fury during the flashbacks depicting the 1968 Chicago DNC riots breathtakingly extraordinary.

I can’t help but think a tighter motion picture could have been made out of Sorkin’s energetically dynamic script. Once upon a time Steven Spielberg wanted to make this one, and it’s difficult not to imagine what he or the writer’s The Social Network collaborator David Fincher might have done with this material had they stepped behind the camera.

But as those are what-if scenarios and nothing more. I can only take The Trial of the Chicago 7 for what it is and not speculate on any woulda coulda shoulda’s. On that front, Sorkin’s latest directorial offering is timely, engaging and undeniably thought-provoking. It is also spectacularly acted across the board. All of this helps offset a small handful of missteps that admittedly did annoy me, and for this jury of one I still found this story of injustice, sacrifice, personal courage and protest worthy of my enthusiastic support. 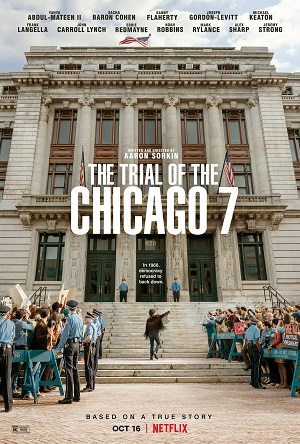