During a benign Halloween game of “spin the bottle” (updated to a twirling knife in consideration of the holiday), high schooler Patrick “Trick” Weaver (Thom Niemann) goes psychotic and starts slicing and dicing his costumed classmates with ruthless abandon. Stopped only after being impaled by a fireplace poker, the teenager’s life is saved by emergency room doctors at the hospital. While being questioned by veteran detective Mike Denver (Omar Epps) and local sheriff Lisa Jayne (Ellen Adair), Trick makes a daring escape, and after being shot several times he mysteriously disappears and is assumed dead after diving into the ice-cold river.

Fast-forward four years. A masked killer keeps popping up every Halloween to slice apart costumed revelers almost as if they are a supernatural force of nature determined to plant their grotesque stamp upon the holiday. This year, with now former Det. Denver about to leave town, this killing force returns to where their reign of terror first began, Trick’s apparent endgame apparently to massacre the retired law enforcement officer, Sheriff Jayne and any of the surviving kids, most notably the kind-hearted and selfless Cheryl Winston (Kristina Reyes), who escaped their knife during the first assault. The trio will have to join forces if they are going to make it through this latest Halloween alive, and in the process also answer the question as to whether or not this is a human homicidal killer or is instead an undead monstrosity spawned from the bowels of Hell.

Trick is like one of those high-concept horror-thrillers that Dimension Films (and other rival studios) used to spawn one after the other after Scream became a critical and cultural phenomenon back in 1996. Not that this should come as a shock to anyone with even a passing interest in a motion picture like this one. Not only did co-writer and director Patrick Lussier edit that Wes Craven classic, he also helmed Dracula 2000 (and its two straight-to-video sequels) and 2009’s reasonably decent 3-D remake of My Bloody Valentine. In other words, material like this is right up the filmmaker’s proverbial dark alley, all of which makes his film’s overall confident competence and relatively sturdy construction not much of a surprise.

Even with that being the case, it’s equally clear that Lussier and fellow writer Todd Farmer (Drive Angry) are almost too clever for their own good. The climactic onslaught of plot twists and character revelations aren’t so much shocking as they are frustratingly tiresome. The pair just don’t know when to quit, and there was a point where I felt like I was watching a down-and-dirty little horror yarn with sudden aspirations to have more endings and postscripts than Peter Jackson’s The Lord of the Rings: The Return of the King. Their movie inexplicably just keeps going for almost no reason whatsoever. Worse, it feels the need to suddenly overexplain what could easily have been left up to the viewer’s imagination. I found it tiresome, and even if the final shot (a blatant setup for a sequel if I have ever seen one) did bring a smile to my face, it wasn’t so big a one I felt the desire to forgive having to sit through 10 to 15 minutes of utter hogwash in order to get there.

Until that happened I was enjoying Trick a fair amount. It’s pretty silly, and Lussier is certainly pulling from the same bag of tricks he watched Craven utilize while making Scream (and which he decently aped with My Blood Valentine), but that doesn’t make the carnage he was orchestrating any less fun to watch. The extended prologue showcasing Trick’s initial murder spree and subsequent escape from Det. Denver and Sheriff Jayne is wondrously executed, and I equally loved a set piece inside a Halloween maze where Cheryl and her best friend Nicki (Kya Brickhouse), another survivor from four years prior, realize the danger they’re in isn’t nearly as faux as it was supposed to be. I also liked the nimble way in which Lussier moves Trick around his urban chessboard, the gleefully macabre manner in which he dispatches his victims sending more than a few shivers up my spine.

I just wish the movie didn’t feel the need to crumble in on itself. There’s an entire vignette devoted to Det. Denver going to the FBI for help that only exists to potentially prove his theories correct while also showcasing them to be idiotic boobs deserving of what happens to them when Trick come calling. Don’t get me wrong, it also feeds into his decision to give up his badge (whether that was his to make or not I can’t say is especially clear), but that still doesn’t make the section feel like an essential, organic piece of the larger puzzle. There’s also a massive subplot devoted to another survivor from the first attack that oddly goes nowhere, the narrative reveals connected to his story so obvious his whole arc can’t help but fall a little flat.

It all makes Lussier’s latest a bit of a minor disappointment. It’s obvious the director knows what he is doing, and thanks in large part to cinematographer Amanda Treyz’s smooth camerawork and Tommy Aagaard’s kinetic editing his movie is very easy to watch even when the script goes self-indulgently haywire. But no matter how much slack I want to cut the film the last third is just too obnoxiously overwrought for me to find much in the way of overall enjoyment in anything that transpires. Trick isn’t much of a Halloween treat, and like a sour apple stuffed with razor blades washing the bad taste of this one out of my mouth is going to be difficult to do. 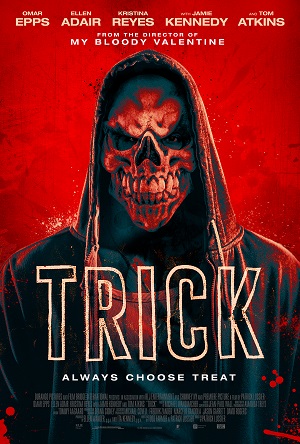