Pixar’s Turning Red is one of the studio’s best films. Considering its overall track record, this is not a statement I make lightly. But director and co-writer Domee Shi — already an Academy Award winner for her delightful 2018 animated short film Bao — has crafted something marvelous. This is a coming-of-age sensation where the supernatural and the mundane happily walk hand in hand, with each eye-popping surprise grounded in lifelike normality.

At its heart, this is a mother-daughter tale set during a time of great turmoil: a young girl going through the first pangs of puberty and a loving parent’s smothering need to help her child deal with these changes. By utilizing a fantastical element involving a sudden, initially uncontrollable transformation into a giant red panda as a starting point, Shi and her fellow writers somehow still deliver an intimate, deeply personal story of teenage discovery.

For 13-year-old Toronto middle schooler Meilin Lee (voiced by Rosalie Chiang) — Mei to her friends — life couldn’t be going better. She is a terrific student with a particular fondness for math, has a trio of devoted friends whom she thinks the world of, and loves to help her mom Ming (Sandra Oh) at their neighborhood’s temple, regaling tourists with tales of a mystical red panda who protected their family from ruination in generations past. She’s also somewhat shocked to discover she has a crush on the five young members of the popular boy band 4*Town, especially their hunky lead singer Robaire (Jordan Fisher).

Mei is changing. Her emotions are going into overdrive. She has desires and needs that appear to be going in a different direction than the path Ming has already meticulously plotted for her daughter. Her hormones are seemingly out of control.

Each of these would be difficult enough to navigate all on their own, but in Shi’s story, Mei also comes face-to-face with her family’s curse — initially intended as a gift: as soon as they begin to blossom into womanhood, each girl discovers herself transforming into a giant red panda whenever her emotions spiral outside of her control. It’s a cute, cuddly, and hysterically terrifying conundrum, and it’s one Mei will discover the best way to deal with in her idiosyncratically self-confident way.

I can’t think of another major Hollywood studio motion picture primarily aimed at children that has so openly dealt with issues relating to female puberty. There’s a sublime scene where Ming goes overboard trying to “assist” her daughter in what she believes is her first monthly moment of greatest need. Sequences of Mei poofing back and forth between panda and human states of being as her emotions withstand one psychological tsunami after another are hilariously metaphorical, each dripping in intelligently imaginative inspiration.

There’s not a false beat anywhere to be found. The friendship between Mei and her gaggle of besties Miriam (Ava Morse), Abby (Hyein Park), and Priya (Maitreyi Ramakrishnan) is so empathetically pure that watching the four girls interact with one another is nothing short of priceless. Another subplot involving one of Mei’s classmates, Tyler (Tristan Allerick Chen), is full of surprises. He’s a character who initially appears to be nothing more than a stereotypical teenage bully — but that’s far from the truth, and I loved how his arc concluded in mosh pit of exuberant acceptance overflowing in youthful giddiness.

But it is the bond between mother and daughter where Turning Red ascends from being great to the absolute peak of extraordinary. There is something magical about how they learn to deal with one another. While I don’t feel it is appropriate to speak to all of the cultural aspects of the relationship, as far as I’m concerned, the fact their Chinese-Canadian identities play such a major role in the proceedings only helps to augment the universality of the pair’s connection.

The animation is unsurprisingly stunning, and while the entire vocal cast is aces, Chiang and Oh are the undeniable standouts, the latter particularly so. Ludwig Göransson (Tenet) provides a crackerjack score, and editors Nicholas C. Smith (Brave) and Steve Bloom (Coco) do a masterful job of creating momentum and a constant sense of movement without allowing the film to descend into a chaotic visual blur.

There’s so much more I want to say, so many additional aspects I want to dig into in greater detail. But doing so could lessen the impact of the storytelling magic Shi effortlessly pulls out of her creative hat. And as that’s the last thing I want to do, I guess I’m going to leave things there. Turning Red is a miracle of storytelling genius. It will be one of the best films of 2022. Heck, it may turn out to be one of the best I’ve seen the remainder of this decade. 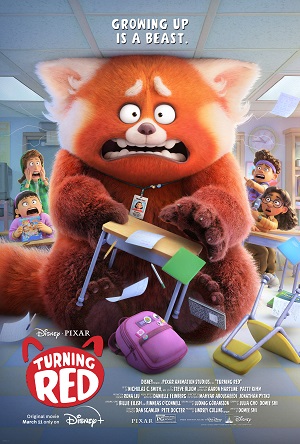