Brave is beautiful. Literally so, in regards to the animation, but considering the film is sprung forth from the digital animation wizards of Pixar that’s hardly a surprise. But it is also figuratively beautiful, the film’s simple, delicate story a celebration of mother-daughter relationships that continually made me smile. Even with being set in the middle of the Scottish Highlands in an unspecified yesteryear where magic and myth still reign, the movie speaks plaintively to the here and now, the story celebrating a universal truth about family, life and love that’s practically guaranteed to melt the most hardened of hearts and bring soft tears to even the most cynical of eyes.

Even so, the movie is not the rip-roaring adventure its trailers and teasers have likely led audiences to believe it was going to be. While the heroine, whip-smart teenage Princess Merida (voiced by Kelly Macdonald), is an independent firebrand handy with a bow, while a giant bear is stalking the Highlands sniffing around for blood, overall the movie isn’t that concerned with showcasing impossible bits of daring-do.

Instead, the film’s cadre of writers, working from an original story by Brenda Chapman (Cars, Beauty and the Beast), whom it should be noted was also the film’s original director but for reasons that are still unclear was asked to leave the production, have crafted a simple tale of a young girl trying to understand the mother, Queen Elinor (Emma Thompson), whom she sees as trying to keep her from being her own woman. They butt heads, get into arguments and frequently misunderstand one another, a universal anthem as far as mothers and daughters are concerned the world over. But while what they say might not be original, the way they interact and speak to one another is surprisingly blunt, ringing with heartfelt authenticity, all of which makes the more fantastical bits all the more captivating.

The basic plot concerns Queen Elinor finagling her husband King Fergus (Billy Connolly) into bringing together all of Scotland’s four major clans in hopes of finding a suitable husband for their daughter, much to Merida’s consternation. But the princess discovers a flaw in the rules outlining her potential betrothal which allows her to disrupt the proceedings which inadvertently puts her father’s rule over all the clans in jeopardy. Worse, she also has an encounter with a kindly witch (Julie Walters) with a bizarre affinity for Black Bears, and after a poorly worded wish the lines of communication between Merida and her mother all but vanish completely.

And that’s pretty much it. There’s a trio of diminutive red-headed princes with a penchant for tomfoolery, while some of the Loony Tunes-style antics of the Scottish clans are goofily amusing, but as far as the plot goes there’s not a lot to talk about. This movie is about Merida and Elinor, how they learn to converse with one another, learn from their mutual mistakes and strengthen their familial bond by going through this magically supernatural crisis. That’s it. Nothing more. And I’m perfectly okay with that.

Is it thin? Definitely. But I’m not one to think that’s a problem when the storytelling is as confident and as self-assured as it is here. I related to both Merida and Elinor, could see myself walking in each of their shoes. When the chaos of the finale struck and the potential for tragedy reared its furry head I was as thunderstruck as any of the children sitting in my preview audience, and during the quietly superb climax tears quietly trickled down my cheek at the same moment my heart filled with joy.

Brave doesn’t set its sights all that high, I can’t disagree with anyone who might have an issue with that. But the truths the film speak to and the emotion it pours into giving them life are just as wondrous as any of the achievements found in any of Pixar’s most revered classics. This adventure is as magical as it is intimate, the final moments delivering a poetic missive that speaks to the children we dream we once were, the adolescent we’re embarrassed we had been and the adult we fantasize we’re capable of becoming. It is, in a word, beautiful, and I will just leave things at that. 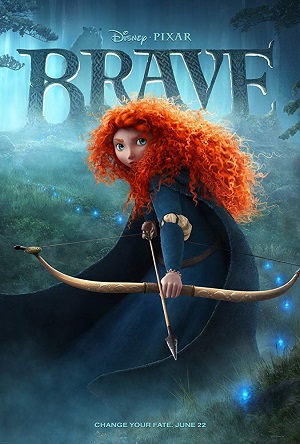