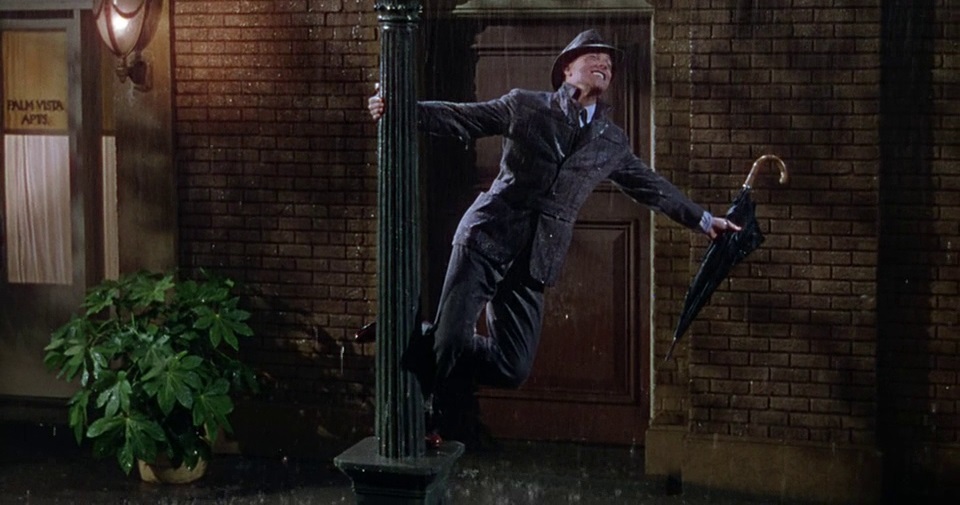 Singin’ in the Rain: Celebrating 70 years of saying, “Yes! Yes! Yes” to a timeless musical classic

NOTE: This feature originally appeared in the April 29, 2022 edition of the Seattle Gay News. It is reprinted here by permission of the publisher Angela Craigin.

If I were forced to state my favorite comedic moment in cinema history, without hesitation I’d mention 1952’s Singin’ in the Rain. Widely regarded as one of the greatest — if not the greatest — movie musical of all time, this treasure trove of perfect moments is still often forgotten when people talk about great comedies, and that’s inexcusable. To put it bluntly, this is one of the funniest films ever made.

But there is one scene that stands out above all of the others. Silent film stars Don Lockwood (Gene Kelly) and Lina Lamont (Jean Hagen) are about to debut their first “talking picture” to a sneak-preview audience so studio head R.F. Simpson (Millard Mitchell) can gauge the response. To say it goes disastrously would be the mother of all understatements.

The audience is already laughing at the picture, not with it, thanks to the terrible dialogue and Lamont’s high-pitched, incomprehensible squeal. Rough technical issues during production resulted in conversations fading out completely, while a woman tenderly grasping the pearls dangling around her neck creates a sound that echoes through the theatre like a thunderstorm threatening to break down the doors.

All of this is terrifically amusing, but then the magic happens. An audio problem causes the soundtrack to suddenly go out of synchronization. “No! No! No!” screams Lamont, only the words are inexplicably coming out of another actor’s mouth. “Yes! Yes! Yes!” responds this character, only it is Lamont’s lips moving up on the screen. It’s a catastrophic moment for everyone involved (although Lamont loves it), the howls of laughter from the audience reverberating throughout the packed auditorium.

Admittedly, this wasn’t a new idea. Films since the advent of sound have utilized this same device to generate laughs. Countless after have done likewise. Heck, even the upcoming Downton Abbey: A New Era uses a more dramatic version of this moment, putting a very prim and proper British spin on a tried-and-true bit of comedic trickery, and with beguiling aplomb.

Yet no one has delivered a sequence like this with as much full-throttle hilarity as Singin’ in the Rain. Co-directors Kelly and Stanley Donen stage the moment brilliantly. They revel in its absurdity. The sheer, simple lunacy of what is transpiring is never overplayed. There is nothing heavy-handed. Best of all, it plays just as hilariously for a 4-year-old as it does a 40-year-old and as it likely would for a 400-year-old.

It always somewhat shocks me that when people talk about this classic, they tend not to focus on this particular scene very much, if at all. I do get it. The core musical numbers are some of the best ever staged — notably the deliriously acrobatic “Make ’em Laugh” with Donald O’Connor at his clownish best; the sublime “Good Morning,” in which an enchanting Debbie Reynolds shockingly blows Kelly and O’Connor off the screen; and the undeniably awesome performance of the title tune with Kelly charismatically bringing down the house.

Also, and maybe even more importantly, the climactic sequence “Broadway Rhythm Ballet” is extraordinary. The color. The sets. The staging. The costumes. Kelly’s choreography. Even after 70 years, not a second of it feels dated. It’s an exhilarating visual feast, and the only similar type of number I think may top it is “The Girl Hunt” ballet from 1953’s The Band Wagon with Fred Astaire and Cyd Charisse, but that’s debatable. Granted, that one’s my favorite musical, so I may be biased.

That disastrous promo screening, though, encapsulates everything Kelly and Donen were attempting to do with so much clarity it’s remarkable. It solidifies the relationship between Lockwood and Lamont, clearly showing who they are and what they stand for. It makes the actor’s bond with best friend Cosmo Brown (O’Connor) all the more unbreakable. Most of all, it allows the burgeoning romance between Lockwood and bubbly chorus girl and aspiring actress Kathy Selden (Reynolds) to have more of an authentic, beautifully sincere emotional clarity.

There are lots of reasons Singin’ in the Rain still charms viewers of all ages the same way now as it did wide-eyed audiences seven decades ago, when it first debuted this very week in April. But as terrific as the music is, and wondrous as the performances are (Reynolds steals the picture, with Hagen right on her heels), and as eternally memorable as Gene Kelly dancing in that the rain with that umbrella may be, this little comedic moment is why I think this timeless marvel of Hollywood showmanship continues to earn new fans every day.

I say “Yes! Yes! Yes!” every time the opportunity to watch it arises, and “No! No! No!” to anyone who refuses to give it a look. I suggest you do the same.

Now celebrating its 70th anniversary, Singin’ in the Rain is available on 4K Ultra-HD, Blu-ray, and DVD from Warner Home Entertainment and to purchase digitally on multiple platforms. It is also currently streaming on HBO Max. 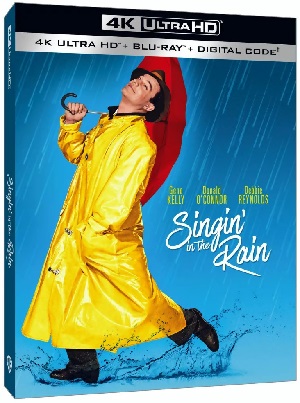