NOTE: This feature originally appeared in the October 1, 2021 edition of the Seattle Gay News. It is reprinted here by permission of the publisher Angela Craigin. Part Nine of this series will appear in Friday’s edition (November 5, 2021) of the newspaper and online. It will be reprinted here at Moviefreak.com on December 1, 2021.

There’s a line in Martha Coolidge’s 1985 college comedy Real Genius that’s always stuck with me. Chris Knight (Val Kilmer) is trying to convince his 15-year-old science prodigy roommate Mitch Taylor (Gabriel Jarret) to not drop out. He tells him the story of the strange man living underneath their closet, former student Lazlo Hollyfeld (Jon Gries), and what it was that led him to crack and become a reclusive hermit.

“He thought the answers were the answers for everything,” says Knight. “All science, no philosophy.” It’s a throwaway line, but its meaning is equally clear and is vitally important to the events that transpire throughout the film. You can’t live your life only one way. A person needs to embrace all facets of their personality. The good. The bad. All the crazy indescribable stuff residing in-between.

I was three years younger than Mitch when I first saw this one, and even though I was nowhere near as brilliant as this teenage whiz kid, I found I could relate to him and his intellectual journey in ways that flabbergasted me. His befuddlement trying to navigate through this strange, new world. Uncertain who he is or how he fits in. Awkward around others, especially those he’s attracted to. Uncomfortable in his own body, almost as if his arms, legs and torso weren’t related to one another.

I don’t think Coolidge or writers Neal Israel, Pat Proft and PJ Torokvei were trying to make some sort of Trans allegory; this was 1985, after all. But for me, that’s exactly what Real Genius turned out to be. Unlike so many other teenage comedies of the era, this one celebrates gender nonconformity and racial diversity. It seldom utilizes for easy laughs the type of rampant homophobia or unintentional racism so many similar popular films of the period have sadly become known for (i.e. Revenge of the Nerds, Sixteen Candles, etc.).

Instead, Coolidge presents an androgynous hero who must balance all the competing facets of his personality and embrace his internalized contradictions. Mitch learns to be proud of his differences and not be ashamed of them. He gains the confidence that comes from being his true self and showing that to the world.

This is all still pretty heteronormative. There’s an entire sequence where Chris stages an impromptu indoor beach party for his science geek dormmates, and he’s invited students from the local beauty school to join them. There are plenty of leering glances, scantily clad coeds and purposefully juvenile gags about sex. Even Mitch’s eventual love interest, the beguilingly quirky Jordan Cochran (a sublime Michelle Meyrink), has to loudly proclaim, “I’m not gay!” at one point, even if she is the most asexually androgynous lead female character this side of Joyce Hyser in Just One of the Guys (coincidentally also from 1985 and directed by a woman, Lisa Gottlieb).

But this film is frequently far more perceptively clever than I think Coolidge and company get credit for. Real Genius champions intelligence. It loves people who are different. It is accepting of “otherness” in ways that are continually a surprise. Sure, the plot at some point becomes all about stopping the United States military from placing a powerful laser in orbit for nefarious purposes, but it wouldn’t be a 1980s teen comedy if something inventively deranged like that weren’t going on.

It’s no wonder why my gender-questioning 12-year-old self fell instantly in love with this one. As Chris, Kilmer has rarely been more charismatically sexy, and both Mitch and Jordan are two sides of a very Trans-friendly coin. Coolidge crafted one of the more progressively insightful comedies I’ve ever seen, and the fact it’s held up so beautifully over three-plus decades is a testament to its exhilarating creative lunacy. Real Genius knows the science, but it also embraces the philosophy. How great is that?

We’ve only got 200 films left on the list after this month’s reveal, but I think this will be the one entry in this series where several titles might come as a major shock to a lot of readers. The great thing is, films like Q, The Quatermass Xperiment, Revenge, Ruthless People, Scream, The Skin I Live In and Slumber Party Massacre II — yes, Slumber Party Massacre II; it deserves to be here, trust me — need to be revealed in October. As far as Halloween viewing is concerned, each one isn’t just appropriate, they’re downright essential.

The oldest title this month is a masterful curiosity from 1922, writer, producer, actress and director Alla Nazimova’s superb Salomé. Based on the play by Oscar Wilde, this is a wildly queer drama overflowing in visual ingenuity. Once feared lost, this bizarre, audaciously resourceful classic has a Blu-ray release from the folks at Kino Lorber that’s positively gorgeous.

The newest is Alfonso Cuarón’s Academy Award-winning Roma from 2018. This meditative marvel only gets better with each viewing, and its lyrically astute clarity is beyond reproach.

In celebration of Real Genius, there’s only one question I can ask this month: What’s your favorite film featuring popcorn as a pivotal plot device? More worthy candidates fit this bill than you might initially surmise. 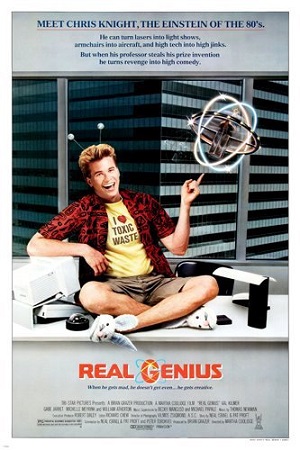