Sean Connery, the Art/Artist Debate and Longing to be a “Golden Girl”

NOTE: This feature originally appeared in the June 4, 2021 edition of the Seattle Gay News. It is reprinted here by permission of the publisher Angela Craigin. Part Five of this series will appear in Friday’s edition (July 2, 2021) of the newspaper and online. It will be reprinted here at Moviefreak.com on August 4, 2021.

When Sean Connery died in October of last year at the age of 90, I was heartbroken. He may be my favorite actor of all time. Either him or Cary Grant — their ranking in my headspace changes depending on my mood whenever someone asks me the question.

Connery has always stirred something deep inside of me from the first moment I laid eyes on him in Disney’s Darby O’Gill and the Little People. He remains my favorite James Bond by a country mile. His performances in The Hill, The Untouchables, The Man Who Would Be King and The Offence are four of the finest I’ve ever seen. Frankly, I just find the man sexy as hell, and there isn’t a point in his long, 50-plus-year career where I do not find him attractive.

I remember watching Goldfinger with my parents when it aired on television. This was not my introduction to James Bond (that would be 1979’s Moonraker with Roger Moore), but it was the first time I felt my stomach flutter in some unexpected ways while watching a movie. Not only did I have to deal with the idea I was finding a man (and not his seemingly never-ending bevy of incredibly sexy female costars) attractive, I also had to deal with the fact I wanted to grow up to be like one of those women and not 007. Let’s just say that Shirley Eaton in all her “golden girl” splendor did something for me and leave it there.

As much as we’d all like to fantasize otherwise, there are no perfect people in the world, and Connery is no exception. In a November 1965 interview with Playboy, the actor infamously stated, “I don’t think there is anything particularly wrong about hitting a woman — although I don’t recommend doing it in the same way that you’d hit a man.” He’d later double-down on those remarks in a 1987 interview with Barbara Walters, as if also trying to clarify, playfully bantering with the legendary journalist as to if he was a “male chauvinist” and whether or not that was a bad thing.

It should be noted that in one of his few interviews after he retired from acting, Connery did state unequivocally in 2006 to the Times of London, “I don’t believe that any level of abuse of women is ever justified under any circumstances. Full stop.” I also urge people to read the full Playboy article and watch the entire Walters interview. Both are easy enough to find online.

This does lead to an interesting, and important, conversation. There’s a lot of talk about so-called “cancel culture,” which isn’t so much about canceling anyone as it is holding individuals accountable for their words and actions. I think that’s a good thing. If I say something untoward, idiotic or even borderline reprehensible, I would hope I get called out, as sometimes hearing those outcries can be the only way to grow and learn. It’s the art/artist debate, and it’s a discussion in continual evolution that is almost always worth having.

But there is a generational aspect to all of this I’m not sure we always take into consideration. My mother had no issues with Connery’s comments. She didn’t care for them but also felt they were normal for a man of his age group and the form of masculinity he represented. On the flip side, a fellow critic roughly 20 years my junior found them abhorrent, so much so she openly wondered if she had to reassess the actor’s filmography after learning about them.

Are there any easy answers to any of this? No. There are not. I’ve included films this month starring the likes of Mel Gibson, Charlton Heston, Bing Crosby, John Wayne, Tim Allen and Jon Voight, and as problematic as each of them is, there’s no way I’d consider canceling a single one of the motion pictures they’re involved with listed here.

But I also know I’m not immune from turning on filmmakers and actors I’ve loved in the past for comments or actions they’ve either taken now or that have recently come to light. This makes it impossible for me to pass judgment on anyone who feels the need to do the same.

As for Connery, I still love him to pieces. Many of his performances and his films mean the world to me. I can’t imagine them ever disappearing or being erased. They continue to have value, even as I recognize that his words and opinions deservedly force us to reevaluate the actor in ways that should make each of us uncomfortable. And if it doesn’t? That maybe says more about you than it does anyone else, so take a look in that mirror before getting too sanctimonious.

Going slightly off-topic, one of the things I’ve tried to stress throughout this series is how fluid and malleable projects like this are. There are no absolutes when it comes to discussing “great” art, just personal opinions gussied up in flowery language and supported by research and experience. Lists like this are living, breathing entities, and can be changed and updated at any time for virtually any reason.

I bring this up because that’s exactly how things are playing out here. Back in April I stated that there would be only one John Waters film on the list and that Hairspray and Desperate Living didn’t make the final cut. That turned out to be a lie, as after a recent rewatch I concluded that Waters’ 1988 body-positive classic — which helped secure Ricki Lake a future as a popular talk show host and in my opinion should have garnered Divine an Academy Award nomination — needed to be included.

Changes were made. Hairspray is now listed as one of this month’s 100 selections, and Éric Rohmer’s sublime 1984 comedy Full Moon in Paris was relegated to the honorable-mention page of my Excel spreadsheet where I’m tracking all of this nonsense. Does that mean that I feel Waters’ film is substantially better than Rohmer’s? No. Of course not. It’s my personal feeling at this moment in time, and that’s truly the only way I can explain why I made the switch.

The oldest title on the list for June is Erich von Stroheim’s revolutionary Greed from 1924, and even in a bastardized state and with so much of its footage sadly lost to the ravages of time (not to mention clueless studio heads who chopped it to bits before its release), it remains one of the most groundbreaking, impressively risky masterworks I’ve ever seen. The most recent is Alex Ross Perry’s 2018 stunner Her Smell, featuring a blisteringly raw performance from star Elisabeth Moss so combustible it practically sets fire to the screen.

So many questions I could ask this month, but I’m going to go with the easiest one: Who is your favorite James Bond, and which of the films in the long-running series do you consider to be their best?

My pick? Unsurprisingly, it’s Connery. As for the film, it’s listed here this very month. Also, it isn’t Goldfinger. 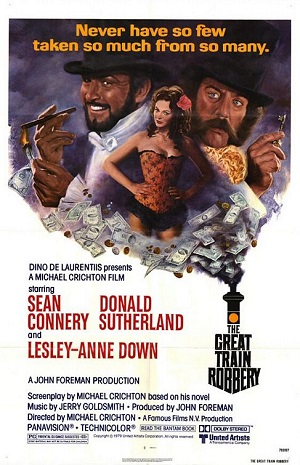