He’s right, his idyllic Shangri-La is shattered with the arrival of two thugs meaning to do him and his patrons harm. But before that happens, Tom takes action and dispatches the murderers with swiftly brutal ingenuity, becoming a local hero and national celebrity in the blink of an eye.

But fame comes at a price. Carl Fogarty (Ed Harris) comes knocking believing Tom is the brother of a renowned Philadelphian named Richie Cusack (William Hurt) and is responsible for taking out his eye with a piece of barbed wire. He’s mistaken, of course, but that doesn’t mean the entire Stall family isn’t in any less danger.

Based on the acclaimed graphic novel by John Wagner and Vince Locke, and working from a screenplay by Josh Olson, A History of Violence is easily David Cronenberg’s most accessible feature since The Fly. Even then this is still a morally complex potboiler sure to unsettle and perplex general audiences, Cronenberg daring to ask tough questions about family, faith, love and the aftereffects of violence some are certain to find distasteful.

Not me. This is an astonishing thriller made for viewers willing to take the time to ponder everything the director fearlessly brings from the depths of the human condition and subsequently strips bare for all to look upon. Meticulously scripted and acted to perfection, Cronenberg elevates the stakes incrementally, slowly descending into a Hitchcockian netherworld of mistaken identity before exploding that scenario into a damning spiral of depraved inhumanity from which there is potentially no escape.

So much in Cronenberg’s oeuvre is obsessed with reality and trying to separate it from fantasy. Throughout his career, the idea that the little lies we tell ourselves to make it through the day can be far more lethal than the actual things going on around us is what gives the director’s filmography its juice. The danger he posits is to become lost in those little white lies, trapped in the world they create for eternity and, like the protagonists in Rabid, The Fly, Dead Ringers, Videodrome and eXistenZ, is key to leading all of them to their doom.

The fantasy in A History of Violence isn’t some William S. Burroughs’ psychedelic virtual reality; it’s the American Dream. A good job, a nice house, a loving family; all of it a lie. Deceit is just another type of violence, a form of psychological warfare that even under the best circumstances will only lead to uncertainty and despair. To Cronenberg, this violence is the damning one, the one to fear, this well-intentioned dishonesty the thing that will rain devastation upon an unsuspecting family.

This movie is far from perfect. It’s very neat and tidy. Tom hits the national airwaves as a hero and yet only one reporter comes to his home after he returns from the hospital. Known mafia men come and go mysteriously and, even though the local sheriff is on the case, no one thinks to phone the FBI to have them watched. After more men end up dead, this time on Tom’s front lawn, not a single journalist shows up even though this time the slain gunmen are far more famously heinous than those he sent to the morgue back at the diner.

But I’m nitpicking. The acting is universally strong, including Oscar-caliber turns from Mortensen and Bello. Harris and Hurt add undeniable menace, the latter showcasing a surreal combination of whimsy and malevolence which helps take the picture into a bizarre climactic showdown I didn’t see coming. From a technical standpoint, Howard Shore’s thrilling score is insidiously menacing, while Peter Suschitzky’s cinematography is outstanding.

Cronenberg is a filmmaker willing to push boundaries and ask tough questions others don’t just shy away from, they sprint in the opposite direction in total fear. A History of Violence is no different. It is an unsettling trek into the heartland full of the director’s trademark blood and gore, and yet its most unnerving aspect has nothing to do with bullets to the head or other forms of bodily dismemberment. It’s something far more internal. It’s a trip to the most perverse and uncomfortable location of them all: Home. 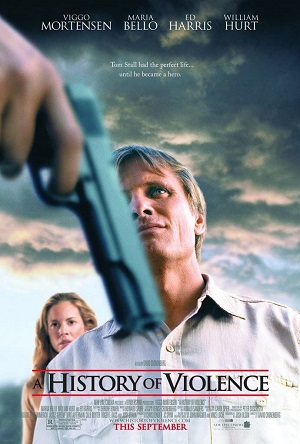