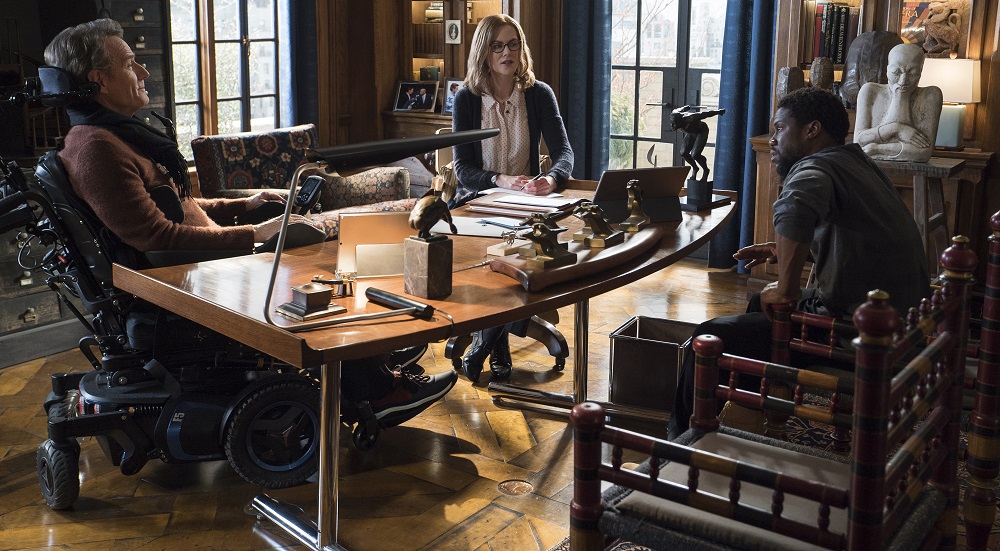 The Upside is a poor, if well-intentioned, remake of the very good 2011 French hit The Intouchables, both motion pictures loosely based on the real-life friendship between wealthy quadriplegic Corsican-French businessman Phillippe Pozzo Di Borgo and his French-Algerian caregiver Abdel Sellou. In the case of this English language version starring Bryan Cranston and Kevin Hart, directed by Neil Burger (The Illusionist, Divergent) and scripted by Jon Hartmere it is very, very loosely based, and any resemblance to the true story of the two men feeling more accidental than it does anything else. While its heart is arguably in the right place, this movie is a tedious slog that plays up a number of regressive stereotypes and caricatures while also lapsing into cheap, sexually questionable bits of slapstick comedy I found personally loathsome. 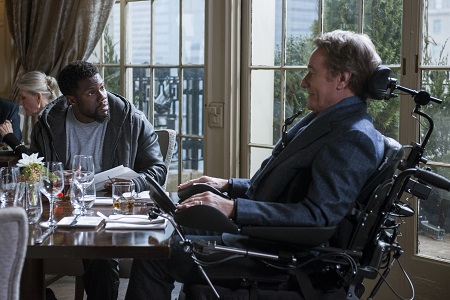 Depressed and gloomy quadriplegic New York billionaire Phillip Lacasse (Cranston) needs a new aide. Ex-con Dell Scott (Hart) needs to prove he’s been looking for work. In the wrong place at the wrong time, the fast-talking former thief ends up in Lacasse’s Park Avenue penthouse sitting across from the businessman’s personal assistant Yvonne (Nicole Kidman). Much to her disbelief, he chooses Dell to be his caretaker, giving the young man until the next morning to decide whether or not he wants to take the position or would rather remain unemployed.

He takes the job, and from that point going forward The Upside attempts to become an unlikely story of friendship as these two men from entirely different worlds learn what makes the other tick. Thing is, unlike the original film Burger and Hartmere have inserted a bunch of pointless additions that add nothing to the story. For one thing, Dell’s journey towards learning about how to take responsibility for his actions and become a selfless instead of a selfish man is severely undercut by a subplot involving his estranged wife and son that’s frustratingly contrived. As for Phillip, he’s a compendium of disabled story tropes that are tiresome, the billionaire painted as a man defined almost entirely by his quadriplegic status and very rarely for his intelligence, creativity and skills that made him a success.

While a remake should be judged on its own merits as much as it can be, in this case it’s very difficult not to look at the choices The Intouchables made and wonder how the filmmakers here couldn’t see going down a similar sort of path would be the thing to do. While not free of melodramatic, somewhat schmaltzy indulgences, the reason directors Olivier Nakache and Éric Toledano’s film ended up being so delightful was that it tried to avoid bowing to convention. Philippe (beautifully played by François Cluzet) didn’t need his caretaker (a brilliant Omar Sy) to “save” him. He knew what his situation was. He didn’t like it, being a quadriplegic made him understandably angry, maybe even a little bitter, but he wasn’t at the end of his rope. Philippe wasn’t ready to end his own life and bringing on an ex-con as his aid wasn’t a clever ploy to see if he could get someone to accidentally put him out of his supposed misery. Instead, their blossoming friendship was pure, authentic and genuine, each man learning something about themselves and about how to live their respective lives from how the other did the same that ended up making each a better human being in the process.

Look, I’m not trying to say the French film is perfect. It isn’t, not by a long shot, and it does have its own moments of saccharine emotional indulgence and disability story cliché that are irritating. But the filmmakers handle things with such restraint, such tender care, these issues don’t matter to the extent they otherwise would have. In the case of The Upside, the same can never be said. Here all of those bits and pieces of execrable pabulum are so obnoxious, so heavy-handed and pushed into the viewer’s face they’re pretty much impossible to miss. Additionally, in this story Phillip is frequently utilized for all of Dell’s supposedly crazy and endearing comedic antics, reducing him to nothing more than a stationary prop and that’s every bit as despicable as it sounds. Some of that humor is of the eye-rolling “gay panic” variety, and while a gag revolving around catheters might be moderately funny for a second or two, stringing one out for a good five-plus minutes is indefensible. 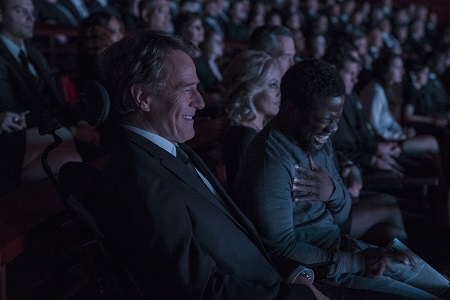 Cranston is too good an actor not to be able to make the most of this, and he does have a handful of scenes that I found to be somewhat emotionally affecting. Hart tries his best, and he isn’t bad, but his typical schtick just doesn’t work very well inside this story. He tries to look stoic, attempts his best to assume a pained, hangdog demeanor of a broken man wanting to redeem himself in the eyes of his son. But it all still comes across as forced and facile, and often it is as if the actor is noticeably straining as he tries to hold himself in check from going into the type of manic overdrive that’s been a big part of his rise to comedic superstardom. It’s a valiant effort, but one I still found more admirable than enjoyable, and as such Hart’s presence didn’t do a lot for me.

As for the rest, Kidman is wasted in a nothing role, while Julianna Margulies’ brief supporting turn falls strangely flat. Burger and Hartmere introduce a number of additional plot elements (like a valuable first edition signed by Mark Twain that ends up with Dell’s son) but all of them strangely go nowhere, while the nonlinear structure doesn’t add anything substantive and only calls attention to itself for all the wrong reasons. The downside to The Upside is that there just isn’t a lot that’s positive to say about it. Burger’s remake is a waste of time and talent, this tone-deaf misfire the first bona fide disappointment of 2019. 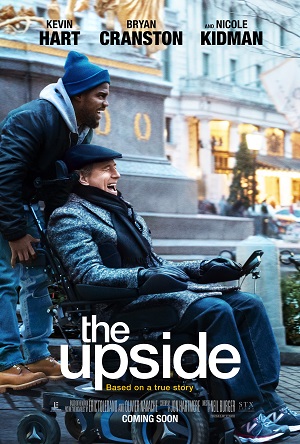