It is the night of the big game, and local radio host Everett (Jake Horowitz) is hustling over to the high school gym to help fix a few technical problems before heading to the station for his evening shift. He chats and flirts with Fay (Sierra McCormick), a charmingly wholesome switchboard operator who is bubbling over with excitement about her new tape recorder that she can’t wait to make use of. The pair leave the high school and make the short walk to their respective places of work, each knowing they’ll be in touch for the remainder of the night as she routes all the calls to the station over to him in-between records.

While at the switchboard, Fay hears a strange audio signal breaking in during some the calls. She thinks she hears it again during one of Everett’s on-air segments. The pair attempt to put the pieces of this strange puzzle together, and in the process uncover a potentially otherworldly phenomenon that could change the course of their lives forever.

Set in a small New Mexico town during the 1950s, The Vast of the Night is an imaginative and thought-provoking sci-fi riff that also happens to be massively fun to watch. An engaging what-if scenario that plays out in something close to real-time, director Andrew Patterson and writers James Montague and Craig W. Sanger have crafted a splashy minimalist debut that moves like lightning and bubbles over in frothy ingenuity. Funny, smart and most of all thrilling, this terrific little gem is worthy of a look.

I like how seductively simple the setup is. The opening sequence introducing Everett and Fay plays out almost like one continuous shot, going inside the high school, through the halls, back into the gymnasium before finally ending up in the parking lot with the pair playing around with her new recorder. I learned so much about the pair during this first act, and I loved how it cemented the ways their relationship would ebb and flow through the remainder of the night as they try to decipher the meaning behind the peculiar audio signal.

But this is only a precursor to a major banger of a critical moment in the film where things come perilously close to spiraling out of control. Running almost 30 minutes, shot in what appears to be one continuous take by cinematographer Miguel Ioann Littin Menz (Hands of Stone) with the central characters making their way frantically across town, this is as spellbinding a single section of a story as any I will bear witness to this year. Not only is this scene a technical marvel, it is also character-driven and essential to the overarching narrative. It’s brilliant stuff, Patterson calm, firm and dynamically controlled handling of events nothing less than sensational.

There’s so much more to add. A good majority of the motion picture takes place with characters speaking on the phone. There’s a lovely bit where a caller into Everett’s radio show explains his connection to the signal, telling a multipart tale of hushed-up close encounters this person is all but certain the government doesn’t want anyone to know about. Thanks in large part to the performances of the actors (especially Bruce Davis, who we only meet as a voice over the phone), the aforementioned Menz and editor Junius Tully, there is a kinetic ferocity to this conversation that’s extraordinary, and even when the screen faded entirely to black I could still feel myself inching forward in my seat in anxious anticipation as to what was going to happen next.

I guess a case could be made that things get a little too overly frenetic near the end, or that the filmmakers are a bit more blatant in showcasing their “Twilight Zone” meets Orson Welles’ legendary War of the Worlds radio broadcast of 1938 roots than is maybe necessary. I’m sure there will also be those who want to complain the purposefully ephemeral and oblique climax isn’t much of a shock. Then there is the notion that there’s just too much dialogue, and watching people chat on the phone or sit down for in-depth interviews isn’t particularly gripping.

All I can say is hooey to all of that. Patterson and his talented team do wonders with this material, the performances from Horowitz and McCormick both outstanding. The Vast of Night is a fast-paced genre excursion into the mysterious unknown. It held me breathlessly spellbound for almost 90 minutes, the haunting nature of the questions it enthusiastically asks as prescient and as essential now as they ever were back during the McCarthyism 1950s time period in which this tale is set. 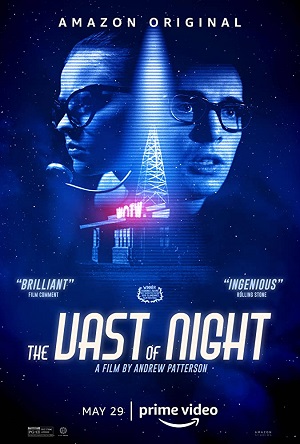