I worry about WALL•E. It seems odd to say such a thing about a movie, especially one from animation giant Pixar, but that’s just the way it is. We live in a cinematic maelstrom where the quiet, the calm and the introspective are not given their proper sue, where the serene beauty of cinema at its finest is, not just dismissed, but oftentimes shunned.

And what is it that audiences crave? Noise. The cacophony of violence (whether it be verbal, physical or a combination of the two). The concept that motion and commotion are entertaining in and of themselves. The idea that subtlety and character are misbegotten concepts and that video game aesthetics of monstrous beasts pounding away at one another are the only things worth paying money to see.

There is an irony here, of course, that I am bemoaning the computerization of motion pictures (there are moments I think CGI has almost become a dirty word) in a review concerning the reigning kings of all things computer-animated, Disney’s cash-cow partner Pixar. If there is a larger corporate entity than the Mouse House I’m not too sure what it is, and it isn’t like the majority of their fare goes against the currently depressive paradigm (with both of those anemic Pirates of the Caribbean sequels offering ample proof).

But none of which changes my central argument (or my central fear) that the bigger-is-better and louder-is-more-popular mindset is putting deeply passionate, original and highly-intelligent features like WALL•E at risk. This is a movie that is, in a word, perfect. Like Toy Story, Finding Nemo, The Incredibles and last year’s Ratatouille, this is another instant classic, the film a soaring testament to the enduring power of love and a film that goes beyond simple explanations and descriptions to become an ethereally timeless wonder distinctly its own idiosyncratic thing.

WALL•E is so unlike anything else Pixar has ever done I’m not even sure where to begin. Echoing the brilliance of Charlie Chaplin and Buster Keaton, infused with the heart and soul of French auteur Robert Bresson and overflowing with the daringly eccentric spirit of Russian wunderkind Sergei Eisenstein, this nearly silent tale of the last working robot on Earth falling in love with a more advanced metal visitor is magnificent. What director Andrew Stanton (Finding Nemo) has accomplished borders on the miraculous, the visual wonderment he and his animators have created only a precursor to the deeply emotional human story that transcends the typical narrative status quo.

While there are a couple of dynamic action set pieces, the majority of the film’s most poignant and moving moments are quite literally silent. This is a love story where the main characters can only say about three or four digitized words (courtesy of Star Wars sound technician Ben Burtt), and like Chaplin’s Little Tramp everything the hero wants to express is done with movement, the poetry of a raised mechanical eyebrow or the heart-wrenching pageantry of an outstretched rusty digit speaking volumes of the heartfelt romance that’s elegantly taking place.

As you’ve probably noticed, I’m not talking much about the storyline. I don’t feel the need. The trailers have done a decent job fleshing out the narrative basics, and while much will be said about the film’s ecological bent or its apparent slam on humanity’s need for self-indulgent gluttony, I seriously doubt I’m going to add anything new to the conversation. This movie talks about global warming while it also speaks about our continued communal indifference to it, and while the script refuses to preach it ain’t exactly subtle as far as that particular plot point is concerned, either.

So I sit and worry about WALL•E. Its future isn’t certain, and while I’m pretty positive its place in the Pixar canon is going to someday be near the top, with audiences so hardened against films reveling in quiet subtlety and naturalistic grace there is the chance this one’s majesty might just pass most audiences by. Hopefully that fear proves to be unfounded and all those souls trudging like idiotic mechanized automatons to the multiplex will wake up and discover a piece of transcendent animated entertainment the likes of which might not come their way ever again. 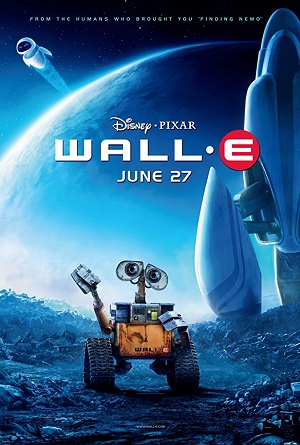