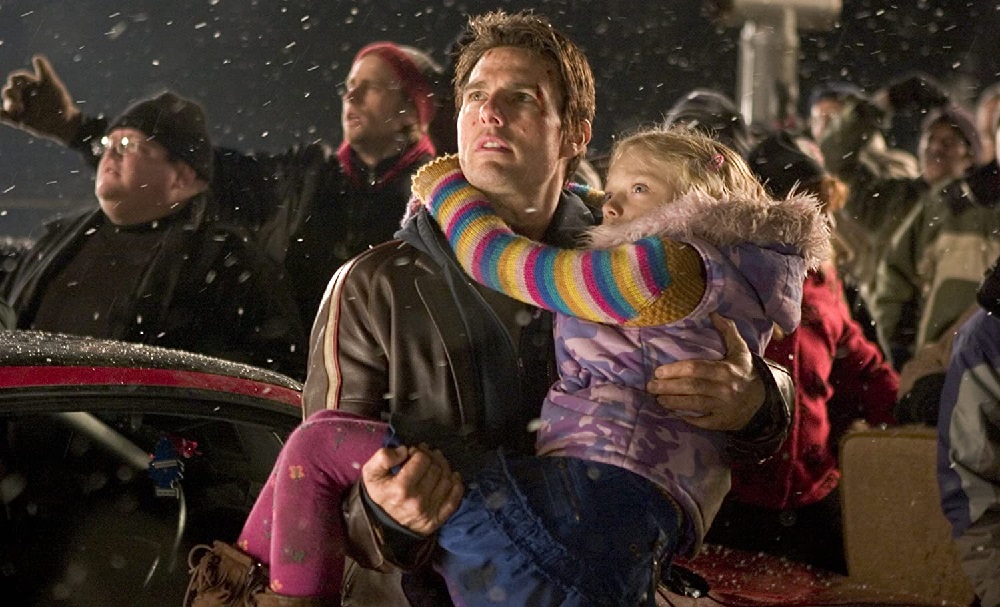 “No one would have believed in the early years of the 21st century that our world was being watched by intelligences greater than our own; that as men busied themselves about their various concerns, THEY observed and studied, the way a man with a microscope might scrutinize the creatures that swarm and multiply in a drop of water.”

Here’s what I wrote about War of the Worlds in my theatrical review way back in June of 2005:

“Steven Spielberg is a great director. I don’t think there’s anything to debate as far that’s concerned. He does, however, have an uncomforting penchant for trying to send audiences home with the warm fuzzies. When the movie is E.T. the Extra-Terrestrial I’m not one to complain. But when it’s Minority Report or Saving Private Ryan, it isn’t exactly a directorial trait that makes me smile. Great, near-perfect films can be undone by one mismanaged final, that last scene pivotal to making sure audiences maintain all that goodwill generated in the proceeding 110 minutes.

Problem is, Spielberg’s insistence on making sure everyone is happy tends to mar otherwise great movies. As much as I adore Saving Private Ryan, those ponderously maudlin bookends come perilously close to destroying an otherwise stellar motion picture. With Minority Report, the filmmaker took film noir into the world of sci-fi, But instead of going for that perfect Woman in the Window or Double Indemnity-style finish, the director seems to have instead insisted on a coda filled with marital bliss, surprise pregnancy and a junkie miraculously cleaning up their act to become a hero. And yet, both still retained the majority of their magnificence, somehow remaining potently effective even with such hackneyed conclusions.

Now comes Spielberg’s latest, and at a reported $185-million his most expensive, out-of-this-world adventure, the Oscar-winning filmmaker tackling the mother of all science fiction tales, H.G. Wells’ masterpiece of human terror War of the Worlds. Those expecting the cute and cuddly aliens of E.T. or Close Encounters of the Third Kind, be prepared for a shock. These invaders aren’t interested in being friends. No, these guys want Earth for their own, laying the seeds of conquest quietly for thousands of years in order to stage the perfect assault on an unsuspecting humanity. As one character points out late in the film, “This isn’t a war. This is an extermination.”

To selfishly juvenile New Jersey dockworker Ray Ferrier (Tom Cruise), stuck with his two children Robbie (Justin Chatwin) and Rachel (Dakota Fanning) for the weekend, the end of the world is suddenly an opportunity to grow up and start acting like an adult. For the first time Ray’s kids come first, the estranged parent intent on doing everything he can to get his two loved ones back into the arms of his ex-wife and their mother Mary Ann (Miranda Otto).

Easier said than done. The aliens, protected in giant mechanical tripods invulnerable to human attack, are single-mindedly laying waste to everything they encounter. Human beings disintegrate into clouds of dust, while entire buildings and superhighways are turned to rubble in horrifically destructive nanoseconds. The true danger, however, might not be the one presented by the mechanized army stampeding across the countryside, but from humanity itself as it chaotically trembles to petrified pieces in the wake of this new and seemingly unstoppable threat.

The genius of War of the Worlds is that it is not seen through the eyes of the fighting forces but instead follows a perfectly normal man struggling to save his children. Ray spends the entire picture packing up his kids and running away from the conflict. He is not interested in joining the cause. He has no idea how to bring down the mechanical otherworldly menace. He’s not going to risk the lives of his children on foolish delusions of grandeur and glory.

Spielberg and writers Josh Friedman and David Koepp have constructed a superlative script, fleshing out Wells’ tale in imaginative and innovative ways while also updating it into the present with surprisingly deft aplomb. Nothing seems forced or out of place, everything meshing together so tightly the goosebumps start forming immediately.

The director has always been able to build tension magnificently (just re-watch Jaws, Duel, Raiders of the Lost Ark or Jurassic Park) and that’s the case here as well. The beauteous lightning storm which sets the stage for the initial attack is sublime, while the appearance of the first tripod in the middle of a cluttered New Jersey street is downright terrifying. From there, War of the Worlds takes off, Ferrier realizing the focal point of his entire life must change from his own needs to those of his children.

For mass audiences, I’m not sure this almost internalized approach to a summer blockbuster is going to work. Those going in expecting something akin to Star Wars or Independence Day are going to be sorely disappointed. There is action, and the special effects are sensational (a pivotal set piece on a ferry boat is spectacular), but the main thrust of the story is fixated on people just trying to survive. That’s it.

Case in point, right when you think the director is going to press down on the accelerator, Spielberg and his writers stop things in their tracks altogether to descend into the basement of a deranged, shell-shocked survivor chillingly portrayed by Tim Robbins. This scene is brilliant, scary and surreal. For all the spectacle, for all the razzle-dazzle, this is the movie’s unquestionable highpoint, the main character realizing he might have to dehumanize himself completely to ensure his little girl survives, Cruise doing some of the finest acting of his career during this sequence.

From a technical standpoint, the magicians at ILM have outdone themselves. From the destruction of Jersey, to visualizing the climactic viral showdown, their special effects work is extraordinary. Longtime collaborators, cinematographer Janusz Kaminski and editor Michael Kahn, do some of their best for the director, holding things together with such seamless ingenuity I couldn’t help but be breathlessly impressed.

Cruise, ignoring his recent idiotic ramblings on “Today” and his histrionic love declarations for fiancée Katie Holmes as best I can, is wonderful as Ray. The actor has never shied from playing inherently unlikable characters, Ferrier fitting square in the same mold as Frank T.J. Mackey (Magnolia), Charlie Babbitt (Rain Man) and David Aames (Vanilla Sky). Cruise dives into all of Ray’s complicated grey areas with forceful self-confidence. In nearly every scene, Spielberg puts the weight of the entire production square on his star’s shoulders. He does not disappoint.

If only the same could be said for the director himself. As wondrous as War of the Worlds frequently is, the entire film is practically undone by a final minute so inane and borderline emotionally revolting I can’t imagine walking out of the theater feeling any worse than I did in that moment. Just before heading into the cellar with Robbins, Ray is forced to make a decision that is close to unfathomable. It is a potent moment gut-wrenching in all the best ways, and it gives the picture an added layer of depth that’s hauntingly unexpected.

But then Spielberg ruins things in the final seconds thanks to some unfathomable desire to create the happiest ending possible. Endings like these hurt Saving Private Ryan and Minority Report, but never to the point I questioned me overall enjoyment of the films in question. The conclusion of War of the Worlds does just that and more.

The longer this climax gestates in my belly, the angrier and more upset I become. Even brief appearances by Gene Barry and Ann Robinson (the protagonists of George Pal’s classic 1953 version) don’t take the bad taste of this ending out of my mouth, this cop-out of a denouement so infuriating I question recommending Spielberg’s latest even if I think so much of the motion picture is some of the director’s finest work. As it is, I still admire the majority of the filmmaker’s Wells adaptation,it’s just that pesky ending I walked out of the theatre wanting to declare war on.”

It was interesting revisiting War of the Worlds. I don’t think I’d taken a look at the film in at least a decade, my reaction to that final scene the primary reason for my reluctance to watch it again. What struck me most is just how magnificent so much of what Spielberg accomplishes here turns out to be. The first third is magnificent, while that sequence in the farmhouse basement with Cruise, Fanning and Robbins unnervingly stunning.

But that ending is as revolting as ever. It undermines Ray Ferrier’s journey to such an extent it makes almost all of the choices he ends up making (especially during the story’s final third) meaningless, the sacrifices this father of two makes for his children ultimately pointless. While Spielberg has made worse films, I’m not sure he’s made one where I have despised the entirety of the climactic scene more than I do the one that War of the Worlds fades to black on. It’s unforgivable, and I don’t think there’s anything more I need to say.

No special features are included on the 4K Ultra HD disc. The remainder of the extras are located on the included Blu-ray disc and are ported over from the previous release.

Holy freaking cow the technical aspects of this 4K Ultra HD version of Steven Spielberg’s War of the Worlds are nothing less than dazzling. From an audio-visual standpoint, this disc is perfect. As for the movie, it still showcases both the director’s best and worst filmmaking tendencies, that last scene so unforgivable I’m almost at a loss for words as to just how heinous it is. 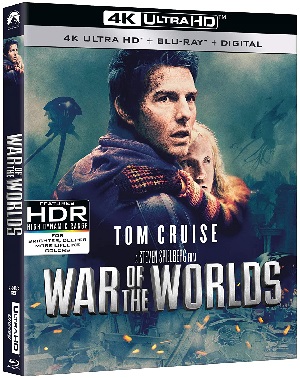