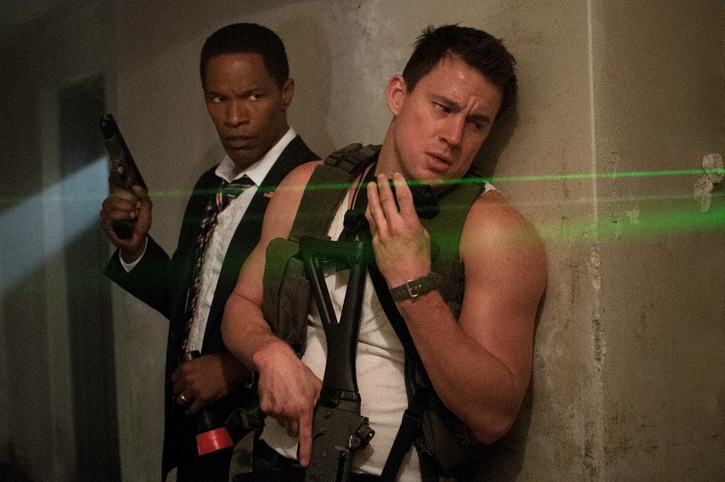 Capitol Policeman John Cale (Channing Tatum) has come to the White House with his political junkie daughter Emily (Joey King) happily in tow. She’s a gigantic fan of the current President, James Sawyer (Jamie Foxx), and the thought her dad might end up on his Secret Service staff has her beyond giddy. But when he’s interviewed by an ex-girlfriend, Special Agent Carol Finnerty (Maggie Gyllenhaal), a woman who knows all there is to know about him, including his past former selfish shortcomings, his chances of getting the post instantly plummet. 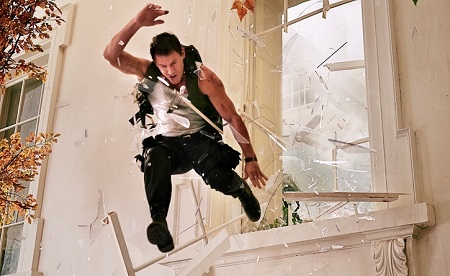 Not wanting to disappoint her, he doesn’t reveal how badly the interview went. Instead, they take part in a tour of the White House along with a group of tourists, Emily seemingly knowing more about the place than the guide showing them around. But when terrorists find a way to infiltrate the premises, it suddenly becomes up to Cale to save the day, protect President Sawyer and keep his daughter from harm, in the process showing Finnerty he can indeed finish what he starts and put the welfare of others over that of his own.

White House Down is as silly and as stupid as it sounds. The year’s second Die Hard clone set inside our country’s most famous home (Olympus Has Fallen with Gerard Butler obviously being the first), this effort directed by Independence Day and 2012 disaster epic auteur Roland Emmerich doesn’t exactly break any new ground. Little happens that we don’t expect, the key villain’s identity is never in doubt and his reasons for attempting this armed insurrectionist coup isn’t exactly shocking. It’s dumb, a fact that James Vanderbilt’s (Zodiac) script doesn’t go out of its way to hide, the movie wearing all its loopy lunacy on its sleeve almost as if it were a badge of honor.

At the same time, there are a ton of little touches throughout I couldn’t help but appreciate and respect. The way our gang of cutthroats (led by Zero Dark Thirty’s Jason Clarke) gets into the White House and how they initially get the jump on the Secret Service inside is believably novel (at least somewhat), while how those on the outside – including Finnerty – react to what’s transpiring doesn’t feel as far-fetched as I anticipated it would. Don’t misunderstand, the movie is nothing more than a hyper-violent hugely expensive action-filled cartoon and as such isn’t something to take with anything close to seriousness; it’s all just presented with a wee bit more intelligence than this sort of thing typically garners.

It helps considerably that Tatum is aces. He continues to deliver strong, believably authentic performances no matter what the genre or how threadbare the character. He’s likeable as ever, and if they ever made an actual Die Hard remake (not that Bruce Willis shows any sign of letting up on the franchise anytime soon, A Good Day to Die Hard notwithstanding) here’s my vote for him to take over as the new John McClane. He’s a great hero, showcasing everything he needs to as Cale tries to reconcile his duty to protect President Sawyer with that of an angry father wanting to make sure his brave little girl comes through all of this alive.

The rest of the cast, including Foxx, who’s overall fine and has great rapport with Tatum, doesn’t have nearly as much to do, going through their typically one-dimensional motions with energy and flair but not exactly a heck of a lot more than that. The exception to all of this is James Woods, and while the veteran character actor isn’t doing a single thing we haven’t seen before he’s still doing it with trademark scenery-chewing flair. He devours the proceedings like there is no tomorrow, and while his actual plan is a little nonsensical seeing him engage in sequence after sequence of verbally acrobatic gymnastics is still a hoot nonetheless. 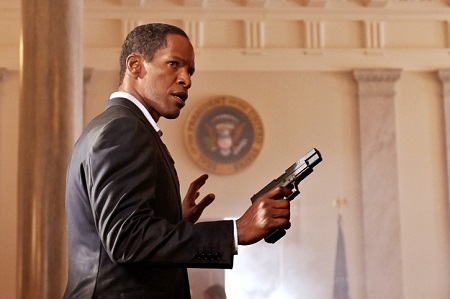 But, much like Olympus Has Fallen, and as has already been stated, White House Down is dumb. Really, really, dumb. Almost criminally so. After the slightly ingenious initial siege and overthrow of the premises the movie quickly devolves into outright idiocy, no more than two different people taking the Presidential Oath of Office after Finnerty and the others trying to take control of the situation from the outside believe President Sawyer is dead. Additionally, the final plan instituted by the invaders doesn’t make a lick of sense, the actions their leader takes one that would have had real world implication that very likely would end with worldwide nuclear Armageddon.

Be that as it may, Emmerich knows how to stage action with the best of them, and in Tatum he has an action star willing to throw himself here and there with excitable ferocity. More, unlike Olympus Has Fallen for some reason this one ends up being a little easier to accept and take with at least a modicum of seriousness if only because the filmmakers refuse to treat their audience like imbeciles. White House Down isn’t exactly good, I’d never call it that, but it can be fun, and as such I can’t really begrudge anyone from making the choice to give this latest cinematic assault on the White House a chance. 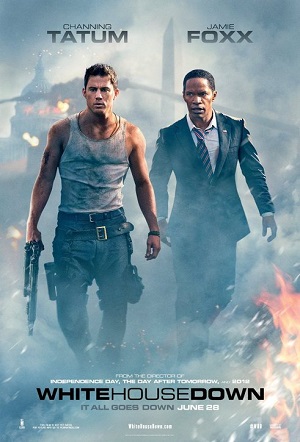