When his wife throws him out of the house and files for divorce, Mark Griffith (Duncan Casey) is suddenly homeless. Spying an ad in the paper, he’s shocked to discover his former best friend Ian Pickering (Justin Marosa) is renting out a room at Dumpling Farm, a secluded spot in the middle of the countryside located in a small, close-knit town. Mark looks at this as being the universe looking out for him as this happens to be the town he grew up in before leaving school and heading for the city, and a return home might just be what he needs to clear his head after a brutal break-up he has no one to blame for other than himself.

Indie U.K. import Wicked Witches, originally titled The Witches of Dumpling Farm when it played the festival circuit, is a gruesome little shocker that doesn’t skimp on the blood and gore. It’s nicely shot by co-writer and co-director Martin J. Pickering (his brother Mark Pickering the other half of that writer/director coin), and at barely 79 minutes the movie never overstays its welcome. It also features a reasonably solid, emotionally-modulated performance from Casey that I found solidly compelling, the growing fear that something wrong is going on at Dumpling Farm gnawing at the corner of his psyche before it blossoms into full-blown terror when the truth is horrifically revealed.

I don’t have much more to say that’s anywhere near as positive. While I don’t think the Pickering brothers have made a bad little horror movie, that does not mean I believe they’ve crafted one I intend to watch again or will recommend others take the time to see for themselves. It all feels strictly by-the-numbers, almost as if the two filmmakers watched Michael Dougherty’s 2007 cult favorite Trick ‘r Treat and thought they’d make a feature-length sequel to the Anna Paquin-led story about seemingly gullible attractive young women getting all carnivorous on a bunch of twenty-something virile men during a drunken party out in the middle of the woods. Unfortunately, as lovely as all the ladies might be, they just as visibly don’t have any individualized characteristics to speak of. They just exist, nothing more, and honestly not anything less, and while the threat they present to Mark and the other men attending his party is genuine, that doesn’t mean their presence oozes with anything resembling tension or suspense.

I do get it. This is Mark’s story, and as he is the one who ends up discovering what is going on it is his fight for survival that the film understandably focuses all its attention on. But that does not mean I ever felt his friendship with Ian was genuine, their backstory not fleshed out enough as far as I was concerned. Additionally, while the threat from the women is likely supposed to feel almost primal and animalistic, because these flesh-eating beauties all blend together I found it hard to be at all scared by them. I also never got a good idea of exactly what their respective powers or their collective intentions were towards Mark, all of which diluted the impact of the film’s climactic moments a considerable amount.

The Pickering brothers do stage a couple of nice set pieces, not the least of which is the moment where the women drop their gorgeous façade and show their true monstrous forms to the unlucky souls they’re about to gleefully gorge upon. There’s also a nice underground sequence with Mark trying to evade these supernatural predators that almost feels as if it were lifted from a well-made found-footage shocker like The Devil’s Doorway or even 2016’s Blair Witch. Finally, as I already stated I do think Casey is quite good, his reasonably complex performance adding an emotional layer to the narrative the motion picture frustratingly never does quite enough with. Wicked Witches isn’t a total loss by any means. It just doesn’t cast a very memorable spell, the whole thing lacking in the type of magic that might have gotten under my skin and made this one worthwhile. 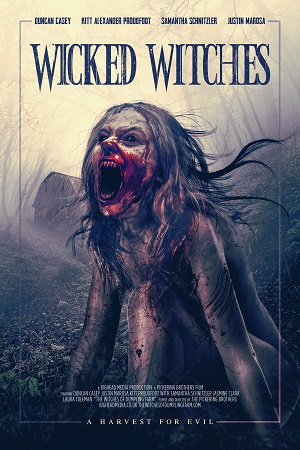