Unpleasant Witches in the Woods an Icy Disappointment

Witches in the Woods isn’t much fun to watch. That does not mean it is also a bad movie. Director Jordan Barker (Torment) does a fine job crafting an intriguingly tense thriller, probably making more out of writer Christopher Borrelli’s script than the material itself arguably deserves. He shows a level of austere control that’s impressive, and as such I cannot dismiss this independent horror yarn entirely.

Considering how unpleasant the majority of the college-aged protagonists at the center of the tale are, that I don’t want to throw my arms up in disgust and shift the conversation elsewhere is something of a surprise. Of the seven primary characters, I think I only cared about two of them, and even that’s not a statement I’m fully confident in. These are decidedly horrible people, and whether this is by design or because almost none of them are developed too far beyond the level of obnoxious horror stereotype I honestly can’t say.

After a logging truck accident shuts down the interstate, a group of college kids on a weekend snowboarding trip decide to go off of the map and follow a secluded forest road to their destination. After a mysterious accident, the seven are suddenly stranded in the middle of nowhere with insufficient food and practically zero means to stay warm.

While two of their members bundle up and attempt to trek through the wilderness to find some help, the remainder hunkers down for the evening, prepared to do whatever is necessary to stay warm. But when Alison (Sasha Clements), already suffering the emotional aftereffects of a horrible campus assault by members of the school football team, returns to the vehicle alone mumbling incoherently and covered in blood, it soon becomes clear there may be more to fear out in the woods than just the freezing temperature.

There’s not a lot more to the film than that. The primary relationship is between Alison and her best friend Jill (Hannah Kasulka), and it is the potential that their bond might fracture under the stress of this unfathomably tense situation where the majority of the drama springs from. But Borrelli pours in several additional elements, including Jill’s abusive boyfriend Derek (Craig Arnold), a member of the team who may know who participated in Alison’s assault, that are never dealt with in anything close to approaching a satisfying way.

The remainder of the characters, including Derek’s disgruntled fellow teammate Philip (Corbin Bleu), concealing his own secrets and is oddly overprotective of both Jill and Alison, aren’t developed well enough for me to potentially care whether or not they live or die. Worse, almost all of them are so unlikable spending time with this lot becomes increasingly disagreeable as events progress. Jill is really the only one who emotionally registers in a meaningful way, and that’s only because the film grants her the opportunity to showcase empathy for Alison.

As for Alison, Borrelli doesn’t do his key character very many favors. While I appreciate that the script doesn’t want to make it clear whether or not she’s psychologically fracturing into a psychopathic rage or instead confirm that she’s being attacked by supernatural forces determined to utilize her as an unwitting vessel for its evil, the young woman becomes a monosyllabic mess so quickly connecting to her is next to impossible. Instead of rooting for Alison to overcome what is happening and not succumb to whatever it is that’s trying to possess her I felt like I was just watching this former victim get instantly victimized all over again, and that didn’t sit well with me at all.

I’m not saying this couldn’t have worked. Had there been some nuance to this internalized battle, had I felt like Alison was given the opportunity to fight for her sanity, I think there would have been some dramatic weight to all that ultimately transpires. It also would have allowed the film’s climax to wallop me in a manner that would have had some weight. Unfortunately the last scenes were frustratingly a foregone conclusion, and even though both Clements and Kasulka are strong in their respective roles, as good as the actresses were all I could do when things ended was shrug my shoulders indifferently and move on to watching something else.

Barker does do a nice job generating a suitably ominous atmosphere, and I like that he refuses to clarify whether this group was responsible for their travails or instead were pawns being toyed with by demonic powers lurking silently within the isolated snow-covered confines of this lonely forest. Witches in the Woods is nicely shot by Martin Wojtunik, and the film’s sound design is genuinely immersive in its bone-chilling ambiance. None of which is enough for me to recommend Barker’s latest, the devilish spell the director attempts to cast not nearly as bewitching as I’d initially hoped it was going to be. 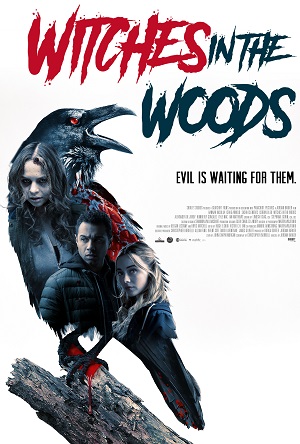