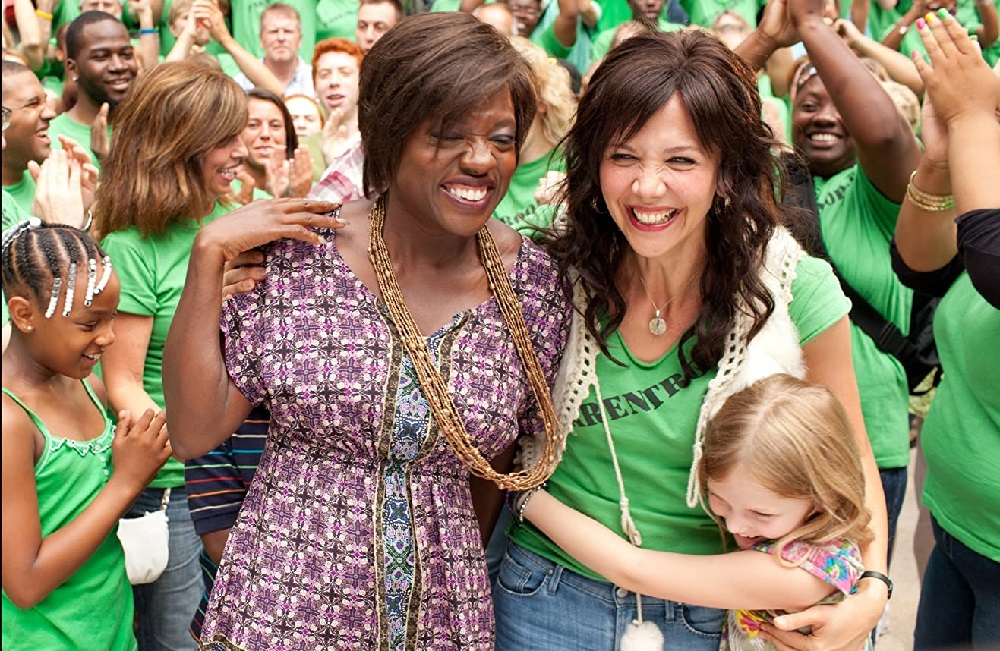 Tedious Won’t Back Down Flunks Out of School

There is something of an irony in that both my favorite film of the year (so far) The Perks of Being a Wallflower and one of my least favorite Won’t Back Down each concern kids in the public school system and are set in Pittsburgh, Pennsylvania. What that irony is, however, I am admittedly not quite sure. But there is one, I’m certain about that, and I feel like its presence unavoidable.

With that out of the way, Won’t Back Down is one of the more frustrating cinematic experiences I’ve had to endure in 2012. Why? Because it is brilliantly acted by its two leads Maggie Gyllenhaal and Viola Davis, both former Oscar nominees. More, I 100% mean every syllable of those words. Much like Meryl Streep in last year’s The Iron Lady, these two women rise so far above the limitations of their egregiously subpar source material its close to astonishing. Watching them work in tandem is as melodious an experience as any I could ever have hoped for, making the fact they’re doing so in a motion picture so clearly beneath their efforts all the more dispiriting.

Not to put too fine a point on it, this movie is as big a stinker as anything I’ve had to sit through in ages. The script is a heavy-handed didactic mess, so intent on pushing forward its own political agenda that it ends up forfeiting all aspirations to dramatic honesty in the process. This wants to be the Mr. Smith Goes to Washington of inspirational teacher flicks. Instead, it is nothing more than a blatant commercial for the destruction of Teacher’s Unions and the push for more Charter Schools. It’s an annoying shouting match that doesn’t know when to quit, and by the time I walked out of the theatre I was so angry about being forced to sit through the darn thing I was worried I’d explode like Elmer Fudd after failing to get his hand on that wascaly wabbit.

Making matters even worse, there’s a terrific story begging to be told here. A nuanced debate can be had about Charter Schools, about government interference, about Teacher’s Unions, about the financial strings and political hindrances that can put a stranglehold on poor inner-city schools which keep them from functioning as they should. Fault lies everywhere. It doesn’t sit in a single corner or comfortably fit on only one side of the Red State/Blue State divide, the fate of U.S. children (and, in essence, the future of the country) infuriatingly in the balance as the powers that be continue to do this partisan dance of lunacy concerning education.

But director Daniel Barnz (Beastly, Phoebe in Wonderland), co-writing with Brin Hill, don’t seem to care one iota for any of that. There are hints at nuance, attempts to let all sides speak their peace (mostly in the form of a torn teacher, played by Oscar Isaac, who isn’t ready to embrace or support the idea of a Charter School), but these forays into a broader discussion are only a mirage, and it becomes blatantly clear early on that filmmakers aren’t interested in having a balanced conversation. By the time the melodramatic ‘captain, my captain’ climax rolls around I almost wanted to vomit into my popcorn bag, and anyone who exits the theatre cheering and not realizing they’ve been played for saps watched a movie far different than the one I was forced to endure.

Yet Davis and Gyllenhaal are extraordinary. They throw themselves into the production completely. They bare their souls, making their respective educational system freedom fighters both worthy of respect. Their cause might not have had the complexity behind it that it requires for their story to resonate, but that doesn’t make either actress’s performance any less magnificent. They go the extra mile, especially Davis, and there were moments where watching her became such a profound joy I almost let myself forget that the movie was such a shocking disaster.

The plot? It’s simple enough. Jamie Fitzpatrick (Gyllenhaal) is a working-class single mom trying to make a life for her and her dyslexic daughter Malia (Emily Alyn Lind) working two jobs and trusting the Pittsburgh school system will give her child opportunities she never got. When it becomes apparent that isn’t the case, she decides to try and take over Malia’s school, enlisting the help of Second Grade teacher Nona Alberts (Davis) to do it. The duo come up with a plan and win over allies, bucking the system (and the Teacher’s Union) as they strive to give the neighborhood kids the education they deserve.

Sounds great, right? Inspirational. Emotional. Just what we need right now. But the movie is like the anti-Waiting for “Superman”, glossing over the intricacies of this deliberation in a single-minded pursuit of its own, not altogether subtle agenda. A bevy of great actors, including Rosie Perez, Holly Hunter, Ving Rhames, Bill Nunn and Marianne Jean-Baptiste, show up but it’s mostly all for naught. Each spouts any number of platitudes and ideological drivel, and try as they all might in the grand scheme of things their collective efforts add up to nothing more than a big fat zero.

I feel horrible for both Davis and Gyllenhaal, and while I get why they were likely drawn to the characters and the material, that doesn’t mean I’m supposed to give the finished film a passing grade just because of them. There’s an important story lurking inside Won’t Back Down, but Barnz and Hill apparently weren’t the duo to tell it, the filmmakers failing their final exam so spectacularly they might as well have flunked right out of school. 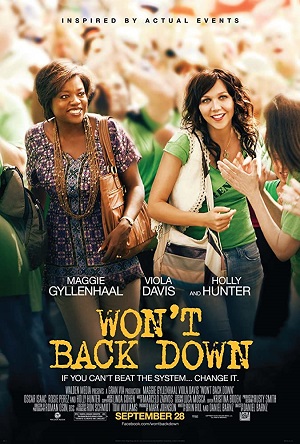