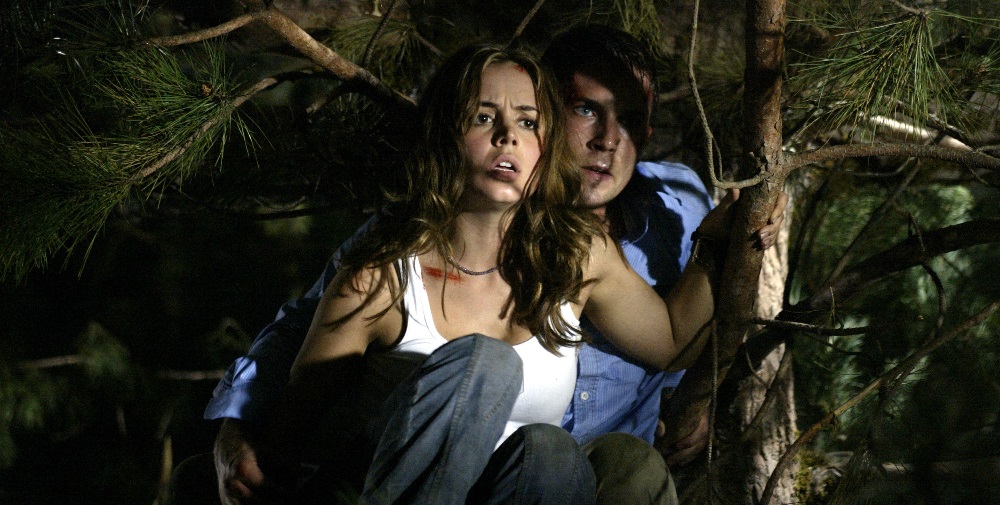 Chris (Desmond Harrington) is having a bad day. Driving through West Virginia heading to an important job interview, he leaves the interstate due to a massive backup. With no cellular service, he makes his way to a backroad gas station only to find the payphone out of order and the attendant suspiciously unhelpful.

With few good options available, Chris decides to take an old mountain road hoping it will take him where he needs to go. Before he can find out, the increasingly frazzled driver smashes his cherry Mustang into a stranded SUV. The quintet of youthful would-be campers driving the vehicle were victims of sabotage, their tires becoming entwined in a carefully placed strip of barbed wire.

Knowing they need assistance, Chris offers to lead everyone back to civilization. Joining him are the headstrong Jessie (Eliza Dushku), the bubbly Carly (Emmanuelle Chriqui) and her charming fiancé Scott (Jeremy Sisto). But things spiral even more dangerously out of control, a trio of cannibalistic killers tracking their every move with designs on adding all of them to their well-stocked larder.

I can’t say director Rob Schmidt (Crime and Punishment in Suburbia) and writer Alan McElroy’s (Ballistic: Ecks vs. Sever) new film Wrong Turn covers any new ground. This is a film where young adults have sex, smoke dope and wander aimlessly into the middle of the forest following a strange blood trial right after discovering their car has been mysteriously tampered with. Do I really need to spell out what happens next?

Yet Wrong Turn works. The scares are legit, making this one of the better pure sit-in-the-dark-and-tell-a-scary-story horror flicks to come down the pike in quite some time. Combining elements of Deliverance, The Texas Chainsaw Massacre, Friday the 13th and The Hills Have Eyes, the filmmakers ratchet up tension and suspense without having to rely upon tons of dripping blood and guts.

Not to say Schmidt skimps on the gore. There are brief glimpses of dissected human remains scattered just about everywhere it seems, cinematographer John S. Bartley’s (Eight Legged Freaks) camera lovingly lingering on each severed ear or detached jawbone whenever and wherever possible. One killing is particularly gruesome, a whooshing axe in the night severing an unlucky victim from the jawbone down. But for all the bits shown to the audience, there are still umpteen more left to the viewer’s imagination, and to my mind this is exactly as it should be.

Don’t get me wrong. Wrong Turn is nothing more than basic genre fodder made with the requisite love, care and attention to detail. But that doesn’t mean every horrifying bite is a tasty one. For one thing, some of these characters are so stupefyingly daft they make the victims in a Friday the 13th film look like brain surgeons. This is also the type of picture where you can predict who is going to die next by their placement in the opening credits, so there’s never any surprise as to who is going to bite the dust and who is going to be left alive to appear in a sequel.

But so what? Harrington and Dushku are great, while Sisto has a couple of moments of touching warmth I didn’t see coming. Elia Cmiral’s (Ronin) crackerjack score is also insidiously effective. Refusing to resort to the requisite jumps and shrieks typical of the genre, his music is so subtly disquieting it burrows under the skin with viciously tenacious resolve. When those shrieks did come, they not only got me to jump, but Cmiral almost put me in the lap of the stranger sitting in the seat next to me.

Schmidt and McElroy travel down a familiar road. But their film does exactly what it sets out to do, which is to startle and scare an unsuspecting audience. Refusing to explain the actions of its evil clan or cheapen its throwback narrative with self-mocking humor or cheap sensationalism, the filmmakers craft a visceral horror yarn that gets the job done, making Wrong Turn the right direction to go for a terrifyingly good time. 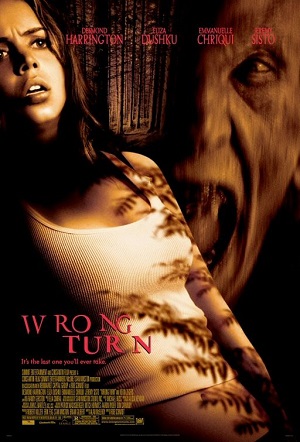