Disquieting You Won’t Be Alone Casts an Exhilaratingly Macabre Spell

Writer/director Goran Stolevski’s You Won’t Be Alone is an ambitious folk horror set in the mountainous wilds of 19th-century Macedonia. It involves an ancient, badly scarred witch, Maria (Anamaria Marinca), who makes a pact with a recently widowed mother (Kamka Tocinovski) to not drink the blood of her newborn babe as long as she can take possession of the girl as a companion when she turns 16.

In an attempt to circumvent their deal, the woman secretly raises her child in a secluded cave marked with holy symbols and sealed with a great iron door. But Maria is a shapeshifter who manages to discover the location of her prize, and 16 years to the day, the witch frees the girl, Nevena (Sara Klimoska), from her stone prison and leads the young woman into the outside world for the very first time.

If Terrence Malick ever decided to dip his toe into horror, I’m guessing it would look a lot like Stolevski’s feature-length debut. This is a meditative treatise on femininity, motherhood, family, and gender roles as seen through the eyes of a teenager who has no idea of the crazy, sometimes bloody wonders she is physically and emotionally unprepared to experience. It is a strange, visually mystifying journey, one that does not always appear to know exactly what it wants to say yet still manages to cast such an exhilaratingly macabre spell that turning my eyes away from the screen was never an option.

Because of her isolation, Nevena is a virgin to all of life’s peculiarities. Maria transforms her into a witch much like herself, only to grow increasingly angry when her new companion doesn’t want to follow commands. The crone leaves Nevena to fend for herself, believing the youngster will come crawling back to her for aid when she learns how harsh humanity can be, or when she deals with mysteries that cannot be easily understood or individuals who do not comfortably fit the binary status quo.

What happens next is difficult to explain even if the basic mechanics of the narrative are fairly straightforward. Nevena is a born observer, and not only does she quickly learn how to shapeshift from watching Maria, but by taking on a variety of personas — male and female, young and old — she ascertains how people relate to one another and the best ways to become a part of a larger community.

Klimoska isn’t in the film that much, but her wiry, awkwardly balletic physical performance sets the template for how all of the other actors — including executive producer Noomi Rapace, French heartthrob Carloto Cotta, and talented Aussie Alice Englert — take up the outward appearance of the character. As Nevena is also mute (Maria removed her tongue when she was still a baby), Klimoska also supplies the whispery, lyrically disorganized voiceovers that become part of the ethereal soundtrack. Her metronomic cadences are increasingly hypnotic, and when combined with the film’s superb sound design, the overall effect is undeniably haunting.

There are moments when cinematographer Matthew Chuang (Blue Bayou) delivers images that stopped my breath cold. There are others where the murkily unfocused framing of particular sequences and scenes don’t appear to add up to anything, almost as if Stolevski is going out of his way to create painterly chaos simply because he can, and not because he has a reason. But more often than not, the director achieves the poetically disquieting aesthetic I believe he was going for, so seamlessly edited by Luca Cappelli (Strange Colours) that the beauteous visual anarchy of Nevena’s expedition of self-discovery is far more of a plus than a minus.

Some of this reminded me of Victor Sjöström’s silent masterwork The Phantom Carriage. Other parts are evocative of Hammer horror yarns from the 1960s cleverly meshed with delicately unsettling Japanese classics like Kuroneko or Onibaba. But Stolevski fearlessly treads his own path into the woods, making the graceful tragic majesty of You Won’t Be Alone difficult to resist and, more importantly, even harder to forget. 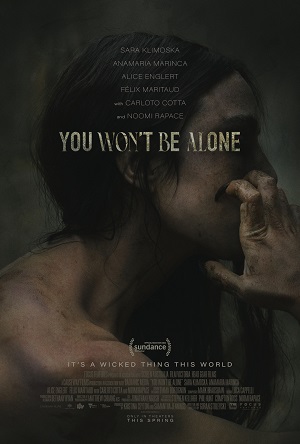