Revered, and retired, composer Fred Ballinger (Michael Caine) is in the Swiss Alps on vacation. He’s joined by his daughter, Lena (Rachel Weisz), who is also his assistant, and Hollywood director Mick Boyle (Harvey Keitel), his best friend, who is currently putting the finishing touches on a script he claims will be the most important cinematic statement of his five decade career. Up-and-coming actor Jimmy Tree (Paul Dano) is also at the resort, trying to decide if the latest, somewhat controversial part he’s been offered is one he should accept. Additionally, everyone at the exclusive hotel waits with baited breath for the arrival of the newly crowned Miss Universe (Madalina Ghenea), the gorgeous beauty queen not shy where it pertains to sharing her opinions or flaunting her flawless body.

It will shock absolutely no one that writer/director Paolo Sorrentino’s Youth in tone, style and theme recalls the works of Vittorio De Sica and Federico Fellini. His last effort, the exquisite and heartbreakingly intimate The Great Beauty, which won the Academy Award for Best Foreign Language Film, did that as well, the filmmaker emulating his countrymen pretty much to perfection with that one. Visually and contextually Sorrentino appears to be on familiar footing here, his treatise on aging, love, parenthood, friendship and the creative process hitting a number of the requisite narrative beats throughout.

All of which makes me rather surprised to be forced to admit that Sorrentino didn’t deliver this time as far as I was concerned. As sensational as all of this might look, Luca Bigazzi’s (This Must Be the Place) cinematography is superb, and as universally well acted as the film proves to be, Caine is fantastic; this might just be one of 2015’s best performances, emotionally Youth left me strangely cold. It meandered and wandered around, seemingly more content to show off Ludovica Ferrario’s (Certified Copy) impressive production design and Carlo Poggioli’s (Divergent) sumptuous costumes than it is doing anything emotionally meaningful. There’s a lot of style but precious little substance, the statements it makes neither particularly profound nor one’s I cared a heck of a lot to hear more about.

Not that there are not special moments of wonderment to be savored. A bit involving Dano’s disgruntled superstar getting verbally shutdown by the not-as-dim-as-she-appears Miss Universe wonderful, as is another featuring him walking around the resort in full costume as a certain mustachioed WWII Nazi leader. Then there is the appearance of Boyle’s chief muse, Hollywood grande dame Brenda Morel, portrayed with fiery foul-mouthed resolve by an impeccably cast Jane Fonda. This tête-à-tête between the two is divine, providing energy and electricity to a movie sadly devoid of both for the majority of its almost two-hour running time.

As for Caine, his mastery of his character as well as the motion picture itself cannot be understated. There’s a sublime sequence where Ballinger is enduring the badgering of an emissary from the Queen (an appropriately fidgety Alex Macqueen) and the way the two-time Oscar-winner navigates the emotional peaks and valleys of the scene is something special. He encapsulates Ballinger perfectly, balancing his regrets as both husband and father nicely with his pride and his exhilaration at leaving a lasting legacy the world will treasure long after he is gone. Caine is as great as he has ever been, making the film worthy of at least a passing glance thanks to his efforts alone.

Yet, for me at least, this feels like sadly like much ado about nothing. Sorrentino’s musing are tiredly obvious throughout, and as pretty as the images he composes might be the fact the emotional content simmered right around zero made caring about anything going on impossible. In the end Youth has nothing new to say, its Italian thematic esthetic nothing more than a mask for an emotional schadenfreude impossible to take pleasure in. 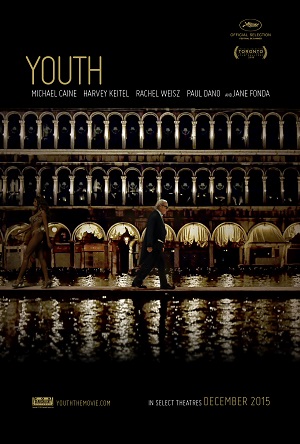