Josh’s (Jett Klyne) not-so-imaginary imaginary friend “Z” isn’t particularly pleased when the boy’s parents Elizabeth (Keegan Connor Tracy) and Kevin (Sean Rogerson) begin medicating him, and he’s not above showcasing his displeasure with as much demonic force as possible.

Director Brandon Christensen’s (Still/Born) low-budget supernatural horror yarn Z, not to be confused with the 1969 Costa-Gavras classic of the same name, owes something of a minor debt to Jennifer Kent’s The Babadook. Both deal with ostracized young children dealing with trauma. Both feature determined mothers with a complicated past inching closer and closer to the psychological breaking point as they attempt to figure out what to do for their child. Both have a creature-feature angle where the mysterious presence attempting to destroy the family may not be nearly as imaginary as those at the center of this struggle initially assumed.

But where Kent’s film dug pretty deep and showcased a layer of thematic complexity that slowly grew in meaning and power as events progressed towards their startling conclusion, Christensen’s latest is a lot more straightforward in its presentation and far less ambitious in its execution. This is not to say his low-budget shocker still isn’t worthwhile, it is, I’m just saying anyone expecting the director and co-writer to have more on his mind than delivering a few well-timed shocks and scares will undoubtedly come away more than a little bit disappointed.

Don’t get me wrong. Any horror effort with a supporting turn from Stephen McHattie can’t be all bad, his subplot as a doctor who is treating Josh – and who also treated Elizabeth when she was a child – certainly has its winning moments. Christensen also stages a couple of terrific jump scares that are far more effective than they maybe have any right to be, while Tracy’s performance slowly but surely grew on me as the film progressed.

Is it essential? Heck no, but I appreciate that Christensen has the strength of his own malevolent convictions, the ending of this one sending a pretty solid chill up my spine that remained there for quite some time. For audiences eager for a genre throwback reminiscent of similarly themed efforts from the 1980s, Z more than fits the bill. Just don’t start watching expecting anything more than that. That’s all I’m trying to say.

No special features other than a 30-day free trial of Shudder are included with the release.

Did you watch Z on Shudder? Did you love it? Then by all means pick this disc up when it goes on sale at a reasonable price. As for everyone else, the movie’s fine, but I can’t honestly say that after one watch you’re ever going to feel the need to take a look at this one again anytime soon. 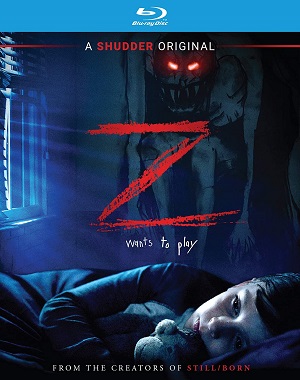