The spaceship Covenant carries 2,000 colonists who have left Earth for a new life on a distant planet on the other side of the solar system. There are 16 crew members who have joined them in hypersleep, the vessel a gigantic ark that will allow humanity to take root in a new corner of the universe. The only one walking the passageways is the synthetic Walter (Michael Fassbender), his task to ensure the trip goes smoothly and all remains peaceful until it is time to awaken the crew to pilot the ship to its final destination. 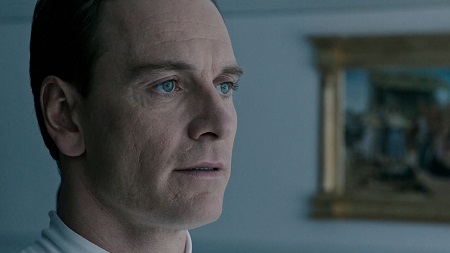 But things do not go as planned, a massive energy burst playing havoc with the Covenant’s systems. Walter makes the decision to engage emergency protocols, pulling the crew out of hibernation to take command, assess the damage, make necessary repairs and determine the best course of action to ensure the survival of the colonists. Before all can be awakened, a fire takes the life of the ship’s Captain, his devastated wife Daniels (Katherine Waterston) immediately elevated to second-in-command while the inexperienced Oram (Billy Crudup) is forced to take command. With the crew’s eyes looking to him for guidance, this devout man of faith must make the most important of decisions, his actions likely to determine whether or not the ship and its passengers make it to their destination alive.

Picking up just a few short years after the events depicted in 2012’s Prometheus, Alien: Covenant is director Ridley Scott’s latest foray into a horrifying interstellar galaxy filled with monsters. Oram and his crew make the decision to investigate a strange signal emanating from a mysterious Earth-like planet instead of continuing to proceed to their original destination. This is a big mistake. While all initially seems peaceful it doesn’t take long for some of the landing party to become infected by an offshoot of the bioengineered black goo introduced in the prior motion picture. This in turn allows for the return of David, the damaged robot repaired by fellow Prometheus survivor Dr. Elizabeth Shaw (Noomi Rapace). The two had made the decision to head to the home world of the beings they nicknamed “Engineers” in the last film, both eager to get answers to a wide range of questions, many of which led to the deaths of all who joined them on that ill-fated expedition.

Did they make it? What is the secret behind this bio-weapon? Did the Engineers facilitate the creation of human life on Earth? Why did they now seemingly want to see it destroyed? These are just a small handful of the pair’s questions, whether or not they were given answers, and why David is now seemingly all alone on the planet just a few of the discoveries Scott and his screenwriters John Logan (Spectre) and Dante Harper, working from a story conceived by Jack Paglen (Transcendence) and Michael Green (Logan), subtly explore in this sequel-slash-prequel’s breathlessly paced 122 minutes. It all continues to feed slowly but surely into 1979’s Alien, dropping a number of hints as to how Ripley and her doomed Nostromo crew could have been led to planet LV-426 in the year 2122. 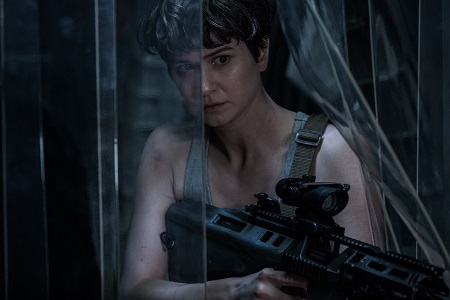 Anyone thinking Scott and his team would adjust course after the bewildered responses to Prometheus and deliver a more horror-centric scenario, that is simply not the case. While the blood and guts quotient is significantly higher (although, for all the nastiness nothing here approaches the insanely nauseating emergency Caesarean section scene in the previous film), the director doubles down on the ideas and themes he presented in that science fiction opus, he and his team once again going out of their way to continue to tackle concepts of identity, humanity and religion in the service of a science fiction suspense tale where the unknown is the most fearsome adversary of them all. There is an epic scale to the madness that’s as intimate as it is emotional, the Covenant’s crew seeing their numbers dwindle one by one the closer they come to learning the truth about the planet they’re gamely trying to explore.

As solid as the cast is (Waterston, Crudup, Danny McBride, Demián Bichir, Carmen Ejogo, Callie Hernandez, Amy Seimetz and Jussie Smollett all making an impression at one point or another) this is Fassbender’s show. The movie opens with David discussing the meaning of life with his maker Peter Weyland (Guy Pearce), bursts into its second act with intense dialogue exchanges between him and his slightly more advanced doppelganger Walter and then accelerates even faster into the climax as his reasons for being stranded on this planet are shockingly revealed. He is front and center throughout, crafting two distinct characters who are born from the same concept of artificial robotic life but who in reality couldn’t be more different. They are Cain and Abel for the digitized cybernetic world, Fassbender brilliantly modulating his dueling performance as the two beings engage in a dexterous interpersonal tête-à-tête as they attempt to figure one another out.

Do not misunderstand. This isn’t 2001: A Space Odyssey and Scott, for all his skill, talent and imagination, is not Stanley Kubrick. As heady as some of this might be the director is still more than happy to figure out new ways for his creatures to burst forth into the world, the appearance of the well-known Xenomorph during the climactic stretch well worth the wait. In regards to the new creatures, the way they infect the body is seriously unsettling, as is their way of escaping out from underneath the skin of their human incubators, the difference between this new Neomorph and its bigger, more ferocious sibling a genetic nightmare of flesh, blood and carnage that’s positively startling.

Still, these sequences are arguably the least interesting aspects of Alien: Covenant. Between Alien, Aliens, Alien 3 and Alien Resurrection, we’ve seen almost all of this before. The creatures hunt down their surviving human prey as if they were reenacting Agatha Christie’s 10 Little Indians, cutting them down one-by-one until only a scant handful remain to fight them off. While Scott stages these attacks with dreadful precision and cutthroat dynamism, their over-familiarity does grow tiresome, and even one of the more disgusting shower scenes in cinematic history (which is saying something) isn’t enough to make any of these portions of the film feel original, unique or outside of the series’ norm. I also felt that Jed Kurzel’s (The Babadook) music pays too much direct homage to Jerry Goldsmith’s original Alien score, many of the themes telegraphing future events to the point I knew what was about to happen next based solely on the musical cues. 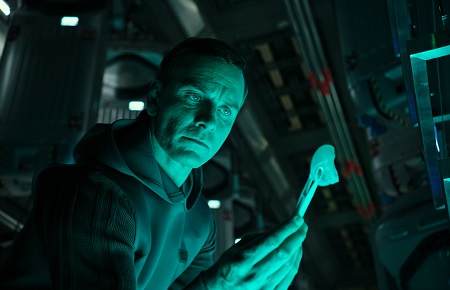 Which is why Scott’s obsession with the themes and ideas, hatched in Prometheus, fleshed out even more here, is so important. This is a horror-thriller for the intelligent viewer, a science fiction game of cat and mouse where the chase isn’t nearly as interesting or as exciting as the reasons behind them turn out to be. This latest extravaganza set inside this particular universe might just be the most nihilistic and disturbing entry in the series yet (even more so than the sacrificial funereal hopelessness of Alien 3), Scott refusing to pull his punches, ending things on a series of final images that are far from heartwarming.

I’m still not sure a series of prequels leading into Alien was ever a good idea. I know for certain it also wasn’t a necessary one. Yet I still love that Scott has refused to play things safe, that he’s tasked his writers to come up with ideas that challenge his audience, that give the story a breadth and a scope that’s majestic in its mythological and theological resonance. Even if some of the horror beats are all too familiar, that doesn’t make the overarching narrative any less fascinating, Alien: Covenant continuing to prove that big things can indeed be born of small beginnings, and I for one am decidedly curious to discover where this story is going to go next.