You’ve got to hand it to director Justin Lin and screenwriter Chris Morgan, at this point they’ve got their Fast & Furious template down pat. Show how heroes Dominic Toretto (Vin Diesel) and Brian O’Conner (Paul Walker) are getting on with their lives, make references to how perfect things are yet at the same time how sad both remain as to not being able to return home to the U.S., have an event occur that threatens the safety and security of their close-knit family of fellow car enthusiasts and moralistic hoods, make sure there’s a force strong enough to bring them all back together for one last score, throw in ever-escalating sequences of vehicular mayhem and then have things come to a conclusion at a tableside event where the family is reunited and the world is put back into peaceful order. That’s how you do it. 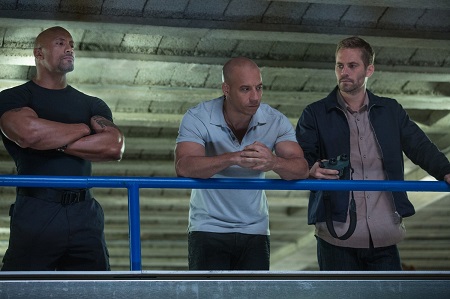 That’s it. That’s all you apparently need, and considering the series has grown in both popularity and quality since the pair started honing their template with 2009’s fourth effort that’s kind of saying something. When was the last time you heard of a long-running cinematic series that hasn’t been rebooted or doesn’t feature a new character in the same role (that means James Bond doesn’t count, sorry) that actually offered up its best effort five films in? It doesn’t happen. More, it shouldn’t continue to happen, as I’m certain there has to be some a cinematic law against it written in some French cineaste journal (and, if there isn’t, by all means there probably should be).

But wouldn’t you know it? Lin and Morgan, teaming up for the fourth time, have somehow, someway, managed to craft Fast & Furious 6 into the early summer’s most effervescently pleasurable event, producing a freewheeling extravaganza of machismo and mayhem that had me grinning ear-to-ear for every single one of its breathlessly, and ludicrously, entertaining 130 minutes. Mixing elements from all five of the previous outings, connecting every entry to this one, including Tokyo Drift in a fashion that is both silly yet also makes perfect sense in its own wildly implausible way, the movie is a total hoot, and as such I admit to having a grand time watching it.

This time out, Dom and Brian find themselves working for law enforcement when DDS Agent Hobbs (Dwayne Johnson) shows up on their Spanish doorsteps asking for help. He’s chasing international criminal Owen Shaw (Luke Evans), a man who has assembled a team of crackerjack drivers and mechanics and has staged heists at high speeds on roadways and bridges all across the globe, something the pair he’s now talking to can relate to. Hobbs needs their help for obvious reasons and he knows Dom and Brian, along with the rest of their group, will give it. Why? Letty Ortiz (Michelle Rodriguez) has somehow risen from the grave and is part of Shaw’s unit, the thought of bringing her home and making their family whole an opportunity neither man can pass up on.

That’s really it for plot. Sure there’s a whole longwinded thing concerning some sort of technological wonder weapon that can blind an entire country’s technological grid for 24-hours, but that’s nothing more than a McGuffin used to raise the stakes. The whole point of the movie is, not to grind it into the dirt, family, the whole thing nothing more than a series of escalating motorized shenanigans intermixed with monologues talking about the importance of sticking to one’s moral code and putting, let’s say it again, family above everything else. 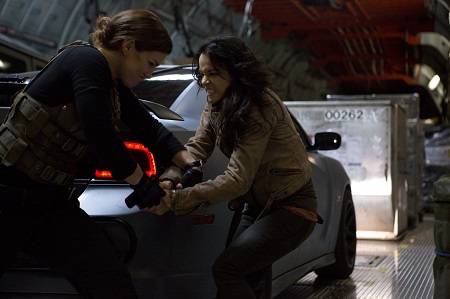 It’s silly and moderately didactic, but Lin and Morgan play thingsl with such a straight face, asking Diesel, Walker, Johnson, Rodriguez, Jordana Brewster, Tyrese Gibson, Chris ‘Ludacris’ Bridges, Sung Kang, Gal Gadot, Elsa Pataky and newcomers Evans and Haywire firebrand Gina Carano to do just the same. At the same time, they fully and completely embrace the Loony Tunes esthetic of all this nonsense, transforming the movie into a Wyle E. Coyote meets Road Runner wonderland where the laws of physics be damned and a person’s body can take the type of hysterically nonsensical pounding that would likely put Superman in the hospital struggling for breath.

But here’s the main thing: Unlike a lot of summer monstrosities that label themselves as being nothing more than “dumb fun” but forget to treat the audience with respect, Fast & Furious 6 remembers that people who do in fact watch this might actually have brain. While the movie itself is pretty stupid, it doesn’t treat viewers as being so themselves, understanding and respecting the audience in a way big budget enterprises of similar ilk rarely do. There’s not a ton more to add, because with something like this what is there to say other than whether or not you were entertained by it? I was, plain and simple, and shock of all shocks part of me even can’t wait to see which direction this series chooses to drive towards next.