Coasting on the interstellar good will generated by their saving the Universe from the genocidal advances of the evil wannabe despot Ronan, Peter Quill (Chris Pratt), Gamora (Zoe Saldana), Drax (Dave Bautista), Rocket (voiced by Bradley Cooper) and the freshly sprouted Baby Groot (voiced by Vin Diesel), the so-called Guardians of the Galaxy, have just helped a race of golden-skinned beings ruled by the authoritarian Ayesha (Elizabeth Debicki) in their fight against an energy-eating monstrosity. Their payment? Custody of the fugitive Nebula (Karen Gillan), Gamora’s vindictive sister, and together the crew plans to take her to the proper authorities in order to score the massive bounty for her capture. 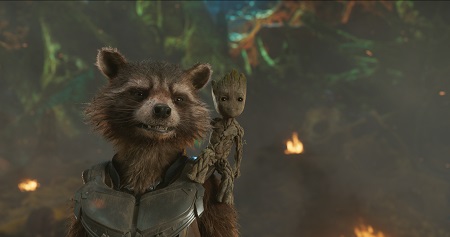 For reasons best left unexplained, after the supposedly heroic crew leaves her planet Ayesha suddenly feels duty bound to put a bounty on the Guardians, turning to Quill’s former Captain and cantankerous father figure Yondu (Michael Rooker) to track them down. But throwing things completely out of whack, into the picture riding atop a spaceship shaped like a giant golden egg comes the jovial, charismatic Ego (Kurt Russell). Aided by his empathic assistant Mantis (Pom Klementieff), he’s one of the Universe’s few Celestial Beings. He also just so happens to be Quill’s actual father, and he’s been looking for his orphaned son for over 30 Earth years.

Overstuffed and featuring precious little in the way of actual plot, nonetheless Guardians of the Galaxy Vol. 2 is a giddy, go-for-broke sequel that I actually enjoyed a tiny bit more than its hit 2014 predecessor. It also shows Marvel learned a few solid lessons from their mishandling of Joss Whedon as it pertained to Avengers: Age of Ultron, and wanting to make sure that they keep this film’s writer/director James Gunn in the company’s good graces they’ve given him free reign to run wild and take this series in whatever direction he wants to. It’s a self-contained adventure, one that drops only the faintest, most non-essential of hints where other stories in the Marvel Cinematic Universe (MCU) are heading, the movie all the more enjoyable because of this.

This comic book rule-breaking bravado is apparent right from the start, Gunn staging the first big action sequence juxtaposed against the opening credits. But instead focusing on the Guardians courageously battling some big, bad monster, he keeps the diminutive Baby Groot center stage, the adorable, doe-eyed creature dancing through the carnage to the groove-worthy riffs of Electric Light Orchestra’s “Mr. Blue Sky.” The director could almost care less how Quill, Gamora, Drax and Rocket emerge triumphant, instead choosing to establish the freewheeling, devil-may-care tone that will become this sequel’s signature motif, the explosions and pyrotechnics secondary to the jokes and ingeniously zany visuals. 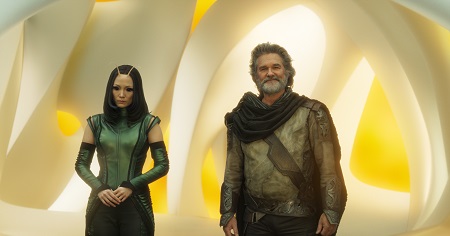 For the first hour this is glorious, almost to the point that the fact Gunn hasn’t done a heck of a lot to put forward a complex, let alone coherent, plot didn’t even register on me. It isn’t until the necessities and requirements of a big budget Marvel comic book adventure come into play that the rudimentary nature of the narrative rears its somewhat ugly head, and as well staged as everything might be, there’s also precious little weight or suspenseful intensity to anything that eventually ends up happening. In fact, what is built up to be an emotionally devastating turn of events ends up being nothing of the sort, and even someone paying the ultimate sacrifice in order to hopefully see the Universe saved and the Guardians once again victorious disappointingly underwhelms.

Yet, I liked that Gunn decided to focus so much of the story on Gamora and Yondu, that he went to such great lengths to round out their characters and make them an integral part of this particular section of the MCU. I also loved that he allowed Drax more freedom to be a part of this nonconformist intergalactic family, especially because I found Bautista to be a little flat in the first film. Here, however, he’s given some of the best lines, delivering his comebacks with a pithy, unsentimentally blunt obliviousness that’s frequently hysterical. There’s also some solid stuff involving Quill and Gamora that’s cute without being cloying, Pratt and Saldana displaying a naturalistic chemistry that recalls 1980s are-they-or-aren’t-they romantic comedy television à la “Cheers” or “Moonlighting.”

It’s Russell who’s having the most fun, though, the veteran actor fitting seamlessly into Gunn’s corner of the MCU with electrifying joie de vivre. Ego isn’t just a Celestial, he’s also a bona fide planet, the action icon tackling this challenge with an fervent brio that’s divine. The actor’s recent run over the past decade-plus, which includes stints as a member of the Fast and Furious ensemble, working with Quentin Tarantino on Death Proof and The Hateful Eight, portraying the grizzled offshore installation manager in Deepwater Horizon, winning an Olympic Gold Medal as legendary coach Herb Brooks in Miracle and shepherding a posse into the heart of unflinching darkness in 2015’s brilliant Bone Tomahawk, has been extraordinary, Russell giddily rising to any and all challenges Gunn chooses to throw his direction with confident gusto. 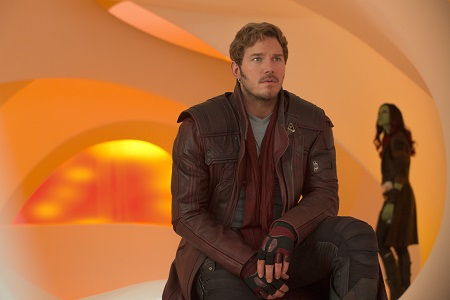 The effects, while having a noticeable CGI sheen, are creatively complex, same going for Judianna Makovsky’s (Seabiscuit) colorfully refined costumes. The whole thing recalls Mike Hodges’ 1980 cult classic Flash Gordon from a visual standpoint, a comparison I do not make lightly and mean as a major compliment, the relaxed devil-may-care style suiting Gunn’s wild child sensibilities perfectly. I’d say the only thing missing is a soundtrack composed by Queen but considering Quill’s mixtape this adventure is filled by the likes of Sam Cooke, Cat Stevens, George Harrison, Glen Campbell, Fleetwood Mac and Cheap Trick I’d say the film has that element covered, too, the filmmaker’s usage of Looking Glass’ “Brandy (You’re a Fine Girl)” frankly outstanding.

I don’t think either Guardians of the Galaxy film is particularly great, but they are a heck of a lot of fun, Vol. 2 so overflowing in passionate imagination taking my eyes off of it for even a single second proved to be impossible. Gunn’s vision continues to be the most inspired of any director currently working inside of Marvel’s universe, and like a dancing Baby Groot I’m pretty sure at this point I’d jive right along to any beat he chooses to lay down next.