The Sawyer family has met their end. A pack of crazed gun-toting vigilantes, ignoring the words of warning from Sheriff Hooper (Thom Barry), have shot up and are proceedings to burn patriarch Drayton Sawyer (Bill Moseley) and the rest of his clan’s house to the ground, caring less who is inside and whether or not they were involved with hideous crimes involving a scared young woman and the slaughtering of her friends by a maniac wielding a chainsaw. 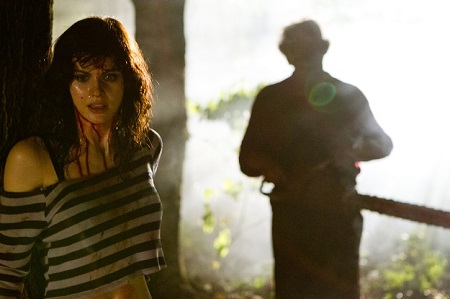 Fast-forward a number of years later. Heather Mills (Alexandra Daddario) has received a package containing news that she has inherited a Texas estate from a grandmother she never knew. Setting out with boyfriend Ryan (Tremaine ‘Trey Songz’ Neverson) and friends Nikki (Tania Raymonde) and Carl (Scott Eastwood) the group hits the road to investigate, Heather’s foster father Gavin (David Born) urging her not to do so.

I shouldn’t have to tell you why that is, but just in case I do let’s just say grandma was hiding a certain someone in the basement, a humongous giant of a man with a fondness for chainsaws and penchant for using the facial skin of a human being as the makings of a mask. She took care of him, kept his homicidal tendencies in check, but with her gone all bets are off leaving Heather and her friends as nothing more than food for a beast hungry to get back to his old, flesh-ripping ways.

Texas Chainsaw 3D is a direct sequel to Tobe Hooper’s legendary 1974 sensationalistic cult horror classic The Texas Chainsaw Massacre (itself fairly decently remade in 2003). Picking up immediately after the events in that film had come to an end before fast-forwarding into the present, the movie does a rather wonderful job of setting itself up and planting the seeds for what potentially could have been something gruesomely terrific. The receiving of the letter, the journey to Texas, the coy, somewhat trepid restraint of a lawyer (a perfectly cast Richard Riehle) handing over keys to an estate he will not set foot on, the look on the face of a small town mayor (Paul Rae) as he eyes a living member of a blood line he thought he and his friends eradicated decades earlier, all of it means something, giving the film an eerie timbre that held me uniquely unsettled.

That’s all prologue and foreplay, because once Leatherface (Dan Yeager) is released from his underground lair director John Luessenhop (Takers) and his cadre of writers (four are credited) drop the ball so monumentally it’s difficult to imagine any of them were involved with a single thing that happened during the opening 20 or so minutes. The movie doesn’t just fall apart, its gets dismembered into an increasingly idiotic pile of goo, the whole filmmaking team so intent on taking things to their preordained conclusion they completely forget that to get there one does in fact need to care about the characters as well as be able to make logical sense of what is going on.

Look, I’m a fan of these films, I like B-grade horror with the best of them, and as such I’m more than willing to forgive a lot just as long as the filmmaking is solid, the characters interesting and the majority of the proceedings do not insult my intelligence. Heck, in the case of this effort I was even going to be fine with the idea that even though events are set in 2012, 38 years AFTER what happened in Hooper’s film, Heather is somehow barely 20 (maybe not even that), and as suspending disbelief goes being okay with this seems pretty gigantic on my part.

Problem is, so many things that happen throughout after Leatherface is unleahsed are mind-numbingly idiotic. Every horror cliché in the book is unleashed while a whole cadre of 21st century technologically-enhanced new ones are stumbled upon by the filmmakers as well. The police force in this town apparently consists of three individuals, and even though they seem to know how to transmit cell phone camera footage back to Sheriff Hooper while tracking a blood trail no one has the good sense to get the State Police on the line and as for some help. 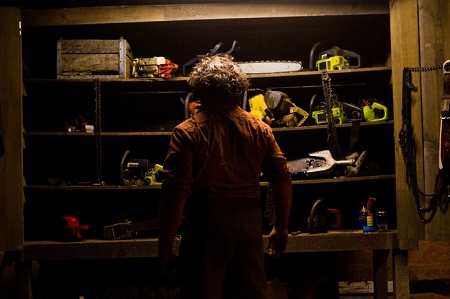 That’s not the worst of it, not by a long shot, Heather and her friends following the “Hi! I’m Stupid and in a Horror Movie!” handbook pretty much from start to finish. They do things so lame I wanted to shake my fist at the screen in frustration, and by the time our heroine has learned exactly what is going on, who her true parents were and what her foster father and the mayor did back in good old 1974 it’s safe to say I could have cared less. It’s a pile of cheap, rudimentarily conceived and even worse executed hokum, and while for genre fans that potentially could be construed as a something of a thinly veiled compliment trust when I say in this case it most definitely is not.

Texas Chainsaw 3D could have been a good movie and worthy follow-up to Hooper’s classic. There are great bits of homage to the original, Daddario is great as the soul-searching heroine faced with a monumental task that will test her moral and ethical fortitude to its max and the opening sequences have chilling vitality that’s noticeably palpable. The seeds of something dangerously disturbing are present, and if the climactic third had been even passably redeemable the last scenes before the fade to black would have admittedly been something special.

But that’s not the case, not even slightly, Luessenhop and his screenwriters failing at just about every turn to allow the decent and compelling aspects of this scenario to germinate and grow. Texas Chainsaw 3D isn’t just a bad movie, considering the potential evident during the first third and showcased during the final scene it’s also a disappointing one, the first wide release of 2013 a sad reminder that some wells just shouldn’t be returned to.