It’s difficult not to look at Michael Bay’s adrenaline-fueled interpretation of author Mitchell Zuckoff’s 13 Hours: The Secret Soldiers of Benghazi without utilizing some sort of political lens. No matter where one sits on the Left-Right political divide, those feelings can’t help but come into play, The Rock and Bad Boys director playing in a sandbox overflowing with, if you’ll pardon my saying it like this, hot button landmines galore.

The story of six military contractors who helped save countless American lives during the September 11, 2012 assault on a U.S. diplomatic compound in Benghazi, Libya that took four American lives, including that of Ambassador Chris Stevens, this is not a movie viewers will likely come to absent preconceptions. While Zuckoff’s book, written with the aid of three of the contractors, Kris ‘Tanto’ Paronto, John ‘Tig’ Tiegen and Mark ‘Oz’ Geist, managed to remain reasonably apolitical, Bay’s film has trouble doing the same. As such, people are likely going to read into it exactly what they want to, the director’s intentions one way or the other likely not going to matter to most viewers.

Paramount’s film is not your typical January release. On one hand, it’s easy to assume the studio saw the box office grosses of American Sniper and Lone Survivor, not to mention the mediocre Navy SEAL actioner Act of Valor, and figured a somewhat similarly themed flick from the director of Transformers could duplicate that type of success. More than that, though, it’s just as likely the studio wanted to stay out of Presidential year discussions, figuring that if they enter the film into the marketplace now it’s likely people will have forgotten about it by the time November rolls around and they are casting their votes for the next Commander-in-Chief.

To his credit, Bay, along with screenwriter Chuck Hogan (The Town), do try to match the tone and style of the source material, while at the same time attempting to hit the type of visceral, heart-pounding intensity Ridley Scott brought to Black Hawk Down and Kathryn Bigelow generated with both The Hurt Locker and Zero Dark Thirty. Yet his blatantly jingoistic tendencies can’t help but get the better of him, his depiction of events having the appearance of balance yet also filled with none-too-subtle clues as to which way the director is leaning. Scenes of Muslims during their prayers filled with shots of RPGs and AK-47s right at the center of the frame, while statements of how the Libyan people reacted to Ambassador Stevens’ death are juxtaposed with accusations of the country’s current state of disrepair that read almost as if Donald Trump wrote the copy and not the filmmakers.

Let me be fair, this is one heck of a well-made motion picture. It’s also the most focused, the best put together feature Bay has had a hand in crafting since 1998’s Armageddon. From a purely structural standpoint, there’s little to get annoyed or upset about, and while the director hasn’t eschewed all his visual tendencies altogether (there are still too many slo-mo shots of kids running through grassy fields, flags waving and blood-splattered combatants rising to attention with heroic symbolism), he checks them all just enough for the story to stay in focus. As crazy as things are, for as spread out as events turn out to be, understanding the geography of where everyone is at, where they’re trying to go and who it is the contractors are protecting is easy to follow, allowing for the inherent danger fueling events to become nail-bitingly palpable because of this.

As such, the director’s technical team is at their collective best. Dion Beebe’s (Memoirs of Geisha) cinematography is crisp and alive, while the editing job by Pietro Scalia (Gladiator) and Calvin Wimmer is, in my opinion, the best any Bay production has ever showcased. Additionally, the actors portraying the six contractors, John Krasinski, James Badge Dale, Pablo Schreiber, David Denman, Dominic Fumusa and Max Martini, are all outstanding, while supporting turn from Peyman Moaadi (as the team’s interpreter Amahl) and Demetrius Grosse (as State Department operative DS Dave Ubben) are equally solid.

But why is the team’s CIA boss (admittedly nicely portrayed by veteran character actor David Costabile) depicted with such contemptible disdain? Why are female characters, chiefly a CIA spy played by Alexia Barlier, given the same misogynistic treatment as sadly seen in so many other Bay enterprises ranging from Bad Boys II, to Pain & Gain, to Transformers: Age of Extinction? Why is it the director can’t help himself, throwing in a nonsensical car chase that, whether accurate or not, feels like nothing more than a10-minute excuse to set things on fire and blow more stuff up?

The main issue, however, isn’t so much the attack on the diplomatic compound where Ambassador Stevens (Matt Letscher) and programmer Sean Smith (Christopher Dingli) both died of smoke inhalation, but instead on the subsequent assault on the fortified CIA enclave hours later. With the former, Bay manages to strike a balance between kinetic thrills and dramatic sensitivity to the story, keeping things from turning into a video game, making comparisons to Black Hawk Down and Zero Dark Thirty feel apt. But with the latter segment, the director falls into the same trap that brought Pearl Harbor down, and while the contractors’ defense of the Americans at the CIA base is suitably exciting, it also uncomfortably feels more like a Rambo or, forgive me for saying, a Missing in Action-style shooting gallery than it does anything substantive. As such, the emotional component is cheapened, at least partially, inserting a level of bad taste into the proceedings I found difficult to get past.

While I have read Zuckoff’s book and responded to it positively, I will not claim I am anything close to an authority as to just how accurate his recounting of the Benghazi tragedy is. Bay’s movie, while claiming to be true, feels even more slipshod, the director’s inability to remain above the fray and channel his inner Scott or Bigelow frustrating. Honestly, though, I don’t know what to make of 13 Hours other than to say it is as troublesome as it is impressive; and while I respect the director choosing to go out on this particular limb that doesn’t mean I believe he was the right person to undertake the job of doing so. 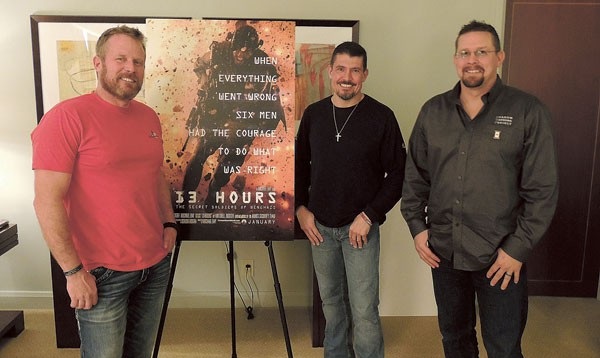 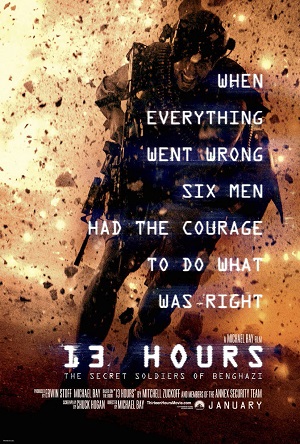