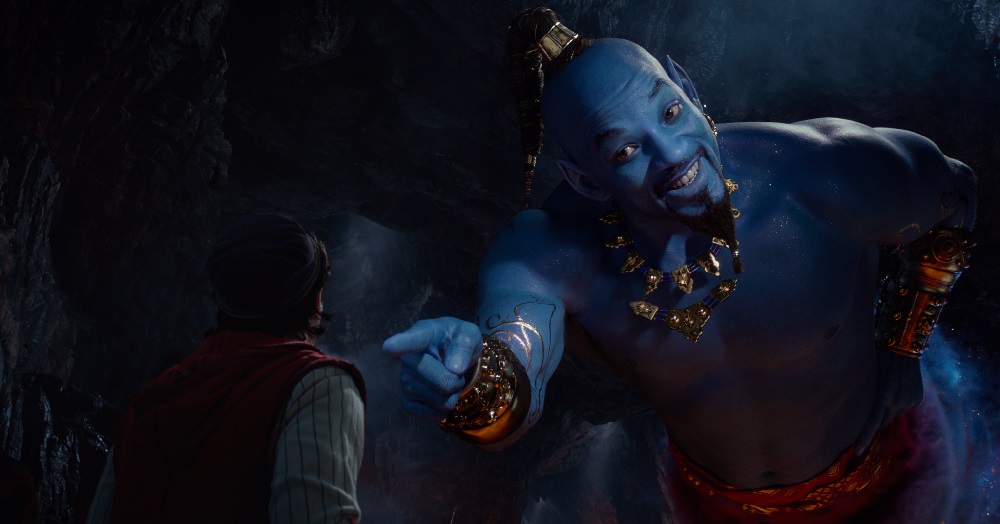 Colorfully Energetic Aladdin Easy to Sing Along With

Guy Ritchie’s Aladdin is more like Bill Condon’s 2017 Beauty and the Beast than it is Tim Burton’s reimagining of Dumbo released this past March in that it is a full-blown musical more than it is a straightforward reinterpretation of a beloved Disney classic. Thankfully, I liked this one a lot more than I did Condon’s film, Ritchie at least adding just enough that is different from the 1992 animated favorite to make seeing it at least somewhat worthwhile.

The animated film is still far, far superior, and that’s coming from someone who isn’t nearly as fond of that one as so many others continue to be. Yet that effort still tells its story in a brisk 90 minutes while it also overflows in heart, imagination, excitement and honest human emotion. Its script is rapturously economical, while the score and the cavalcade of songs written by composer Alan Menken and lyricists Tim Rice and the late Howard Ashman were more than deserving of the two Academy Awards that went their way. Finally, it is a spectacular vehicle for the unique, one-of-kind talents of Robin Williams, the imprint he put upon not just that motion picture but also upon popular culture with his performance as the wise-cracking, all-powerful Genie as bold and as timeless as they come.

Ritchie’s remake, co-written with John August (Big Fish), is over 30 minutes longer than its predecessor, and I honestly can’t tell you what more than 20 minutes of that additional narrative brings to the proceedings. There are still quite a few virtues worth celebrating, not the least of which is the casting of Naomi Scott as Princess Jasmine, Mena Massoud as the street rat Aladdin, Marwan Kenzari as the duplicitous vizier Jafar and Navid Negahban as the overprotective Sultan. Nasim Pedrad is also memorable as the film’s primary new character, Jasmine’s handmaiden Dalia, while Numan Acar has a strong moment near the end as the Sultan’s commander of the guard Hakim, and it is something of a shame he’s so massively underutilized for the remainder of the story.

Then there is Will Smith taking on the role of the Genie. Ritchie gives him a wide berth and the manic energy he showcases is unquestionably strong. He also has a lovely dramatic moment with Massoud as a lead-in to the climactic act that’s suitably heartrending, while the kid-friendly playfulness of the remainder of his performance is charming. But there’s equally something routine and uninspired by what Smith is doing as the magical character, and I never felt like he was challenging himself to do anything near as memorable as what Williams accomplished back in the early ‘90s. His renditions of songs like “Friend Like Me” and “Prince Ali” leave a lot to be desired as well, the latter performance actually forcing me to slink into my theatre seat and cringe on more than one occasion.

I still enjoyed myself here far more than I anticipated. Ritchie mixes things up just enough the majority of the set pieces don’t feel copied beat-for-beat like they did in Beauty and the Beast. I also really enjoyed most of the musical numbers, especially the rambunctious “One Jump Ahead” and the lovely as ever “A Whole New World.” Aladdin’s descent into the eerie Cave of Wonders is also excellent, Ritchie bringing just enough menace and mystery to the scene that it feels a bit fresher and more original than it otherwise would have.

The story hasn’t changed. In the small Arabian kingdom of Agrabah, thief Aladdin has inadvertently fallen in love with Princess Jasmine after she went into the city in disguise in order to experience life outside of the castle. With the promise of untold wealth he is convinced by the wicked Jafar to head into a mystical cave to retrieve a dusty old oil lamp. But Jafar betrays Aladdin and leaves him to die underground, accidentally allowing the boy to keep the prize he was so murderously obsessed with getting his hands on. As for the young man, not only do he and his monkey best friend Abu become chummy with a Magic Carpet, after rubbing the lamp he is stunned to learn he’s now Master to a 10,000-year-old Genie.

Things progress as expected from there as the Genie helps Aladdin masquerade as a dashing Prince in order to romance Jasmine, all the while Jafar, with the help of his talkative parrot Iago (voiced by Alan Tudyk), continues to scheme on how to get his hands on the lamp. Changes include the appearance of the Princess’ handmaiden Dalia who ends up catching the eye of the Genie when he is in human form. Also, while Jasmine was strong-willed and intelligent in the animated film Ritchie and August take things up a notch here, her biggest dream not to find a man to marry but to instead convince her father to install her as his successor whether she ends up wed or not.

Kenzari is pretty great as Jafar, and I especially like that he refuses to overplay his hand and get overtly histrionic just for the sake of doing so. As for Massoud, he’s frustratingly something of a wet noodle, and while he can sing the songs pretty dang well emotionally he’s not that compelling. Not bad, just forgettable, but as he is arguably portraying the film’s main character (it is called Aladdin, after all) this is undeniably something of a fairly big problem. Thankfully Scott is nothing short of spectacular, her depiction of Princess Jasmine an absolute treat from start to finish, and while the new song “Speechless,” written for the film by Menken, Benj Pasek and Justin Paul, is hardly amazing, her two-part delivery of it most certainly is.

It’s a little weird that the majority of the principal cast speaks and sings with perfect Americanized English while everyone else sports a Middle Eastern accent. I also was a little annoyed that Jasmine, in spite of all her strength, acumen, tenacity and skill, still finds herself a helpless damsel in distress at key points of the narrative. The film alternates between looking like something that would be too cheap for the Disney Channel and a bona fide Oscar-winner for production design, costumes, makeup and visual effects, a mixed bag to say the least. As for Ritchie, at times it’s a little hard to see his hand in any of this while at others it’s plainly obvious the guy behind features like Snatch, Sherlock Holmes and The Man from U.N.C.L.E. is most decidedly the one at the controls.

Am I being a little too wishy-washy about Disney’s latest attempt to transform one of their animated classics into a live-action spectacle for the 21st century? Maybe. That’s not for me to say. What I can state is that, while lacking in the same kind of ingenious magic that helped allow the original to stand the test of time, this new Aladdin still has a few winning tricks up its sleeve making it worthy of a look. I enjoyed watching it, this colorful Arabian fairy tale a musical remake I happily sung along with. 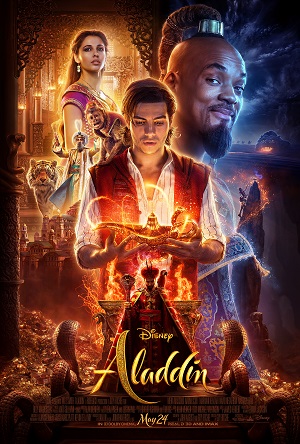