Scott’s Alien Back Where Everyone Can Hear You Scream

There is nothing like an enduring classic to perfectly paint everything that is wrong with scary movies today coming out of Hollywood. It is even more refreshing to see said classic back in theaters where it belongs, its simple claustrophobic terror ageless. Where other movies are dated almost before they leave the multiplex, Ridley Scott’s masterpiece Alien holds up as if it were made yesterday, making this rerelease a Halloween treat for everyone looking to spend some quality time sitting in a darkened theater.

Lord knows, the near 25-years since the film’s original May 1979 release have been good to it. According to the American Film Institute, its villain the Alien is the fourteenth greatest of all time, while Sigourney Weaver’s Warrant Officer Lt. Ellen Ripley is the eighth greatest hero. Even the E! television channel has gotten into the act, naming Scott’s film the sixth greatest American thriller ever made. Not too bad for a sci-fi chiller not especially well-reviewed and only expected to make back its budget at the box office during its initial release.

By now, we all know Alien did far more than that. Not only did it launch a varied and quite successful series of films, each directed in a different style and fashion by a young, up-and-coming director, its main villainous character also had its own toy action figure for goodness sake. But does it still hold up almost a quarter of a century later? More importantly, does Scott only muck things up by giving us a new-fangled “alternate cut” of a picture that was perfect to begin with?

On the first question, that’s an emphatic yes, and while I can’t be as adamant with my negation on the second query, Scott’s tinkering doesn’t do any damage that dilutes either the film’s chills or its terrifying legacy. Alien still scares, remaining a white-knuckle thrill ride from the first frame to last.

The plot borders on cliché at this point. The deep space mining team of the spaceship Nostromo, on their way back to Earth, is awakened from their hibernation to check out what appears to be a distress signal emanating from a distant planet. They discover a ship filled with leathery egg-like sacks, one of which opens up and releases a nasty little beast that attaches itself to a crew member’s face.

Back aboard the ship, said creature disengages, dies and the crewman appears to be fine. But all is not as it appears. The alien was using the man as a host, its offspring bursting forth from his chest during dinner. Now, one by one, this new creature dispatches the crew in increasingly gruesome fashion, Ripley and her surviving comrades trying to find a way to stop kill this beast and make it back to Earth alive.

While some of the technology used in the film is undeniably dated, love all the green teletype and what appear to be Christmas lights dangling everywhere, the majority of the visual effects and especially H.R. Giger’s impressive creature and makeup effects remain outstanding. I’ll always be a fan of miniatures and scale models, their hard three-dimensional edges far more realistic to me than anything created in a computer. As for Giger’s Alien, it hasn’t lost its bite, as unspeakably frightening today as he was back in 1979.

What also continues to shine is Dan O’Bannon and Ronald Shusett’s screenplay. Made in the wake of George Lucas’ massively successful Star Wars, Scott’s film holds more in common with Stanley Kubrick’s 2001: A Space Odyssey than it does with Lucas’ ever-popular space opera. It’s a sparse, mesmerizing tale that’s equal parts Agatha Christie and F.W. Murnau.

O’Bannon and Shusett craft real people worth caring about, not character types who are easily dismissed and instantly disposable. Struggles are rumbling beneath the surface in nearly every scene. From Parker (Yaphet Kotto) and Brett’s (Harry Dean Stanton) working-class distress at what they view as unequal treatment, to Ripley’s bitterness at a perceived lack of respect from the male members of the crew, to Lambert’s (Veronica Cartwright) fury towards Ripley’s, this spaceship is a microcosm of human frailty that is forced to but all their various disputes on the backburner thanks to this aggressive alien menace.

As for the new scenes, most don’t add too much. They also aren’t going to be all that “new” to anyone who’s watched the wonderful collector’s edition DVD. Even the fabled “Nest” sequence where viewers learn the fate of Nostromo captain Dallas (Tom Skerrit) doesn’t increase the shock value all that much. If anything, it comes perilously close to slowing the film’s final act down to a crawl, some of the rising tension regarding Ripley’s escape from the Nostromo to dissipate.

One added scene I definitely did like? An early confrontation between Lambert and Ripley. It crystallizes the constant animosity that lingers in the air between them for much of the running time. This is one scene I kind of think should have remained in the original cut of the film.

Scott’s masterful motion picture deserves every accolade it has earned over the years. It was a pure delight to see Alien in a theater, unfortunately for the first time, and I can’t wait to head out and see it again during this anniversary rerelease. As the tagline says, “In space, no one can hear you scream.” In a theater, however, everyone in the crowd can scream along with you. 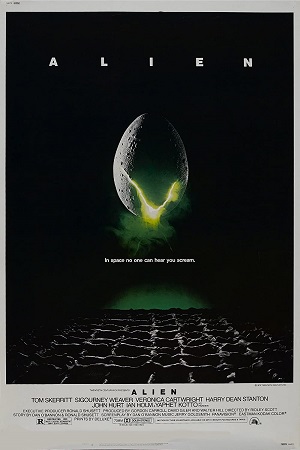