It’s been a while since I’ve enjoyed an entire film directed by Michael Bay. The first Transformers entry wasn’t terrible, and both The Island and 13 Hours have their moments. But liking the whole motion picture? Start to finish? With no hesitation? You have to go back to 1998’s Armageddon, that cartoonish disaster flick with Bruce Willis and Ben Affleck about deep-sea oil rig workers sent into outer space to destroy a planet-killing meteorite far more goofy fun than it had any right to be.

But Bay has now crafted his best film in almost a quarter-century with the frenzied, chaotic Ambulance. A remake of the 2005 French hit Ambulancen, written by Chris Fedak and starring Jake Gyllenhaal, Yahya Abdul-Mateen II, and Eiza González, this is a loony, pedal-to-the-metal actioner that hits the ground running and doesn’t let up for a single second of the lengthy 136-minute running time.

Featuring Bay’s signature brand of visual and auditory freneticism, only stripped down to its barest essentials, this is a brawny, if nonsensical, operetta of vehicular carnage that comes perilously close to bludgeoning the viewer into stupefied submission. But the director displays confident control of the orgiastic excess throughout. For once, Bay keeps the focus on his three primary characters in a way that allows them to have interior lives, and as sensationalistic as it is, there is an authentic beating heart hidden beneath this high-octane skin I wasn’t expecting.

Decorated former Marine Will Sharp (Abdul-Mateen) is nearing the end of his rope. His wife Amy (Moses Ingram) is in desperate need of an experimental medical procedure that their insurance won’t cover. With no other options available, Will turns to his estranged adopted brother Danny (Gyllenhaal) for a loan. While he doesn’t have the money right this second, he does offer his sibling an option to earn the cash. But Will has to decide immediately. No hesitation. No questions. Yes or no. If it’s the former, Will is going to split $32-million five ways, and all his financial problems will be erased with two hours of work.

It’s no spoiler to say that things do not go as planned. Danny’s foolproof bank robbery is undone by a bumbling rookie cop (Jackson White) who inadvertently gets himself shot during the heist. Things go from bad to worse when an ambulance carrying EMT Cam Thompson (González) arrives to treat the fallen officer. With all their escape routes cut off, Danny and Will take the paramedic and the wounded policeman hostage, fleeing in a stolen ambulance with seemingly all of the LAPD hot on their tail.

From Bad Boys to pretty much every installment of the Transformers franchise, Bay’s fondness for car chases is a matter of public record. He stages them big and loud, and it’s as if the director is attempting to top his prior antics each time. With Ambulance, Bay unleashes the mother of all car chases, an almost two-hour rollercoaster ride of constant movement that never stops, rarely pauses, and refuses to step on the brakes.

It’s outlandish, but there’s no surprise there. The director utilizes every trick in the book — and a few new ones he likely had a hand in inventing — to showcase all this mechanized madness. Cinematographer Roberto De Angelis unleashes a visual flurry of snazzy images, while editors Doug Brandt, Pietro Scalia, and Calvin Wimmer cut it together to match Bay’s signature rapid-fire sensibilities, keeping the viewer physically discombobulated throughout.

Normally I’d decry some of this. Bay’s preferred editing technique isn’t for everyone and, in some of his films, this style has the unfortunate side effect of transforming the cinematic image into a headache-inducing visual blur. But here it works quite well, and much like The Rock or even 13 Hours, all of these quick cuts and swirling camera movements do a great job of planting the viewer right in the middle of the story. I felt an emotional kinship with Will, Danny, and Cam, with the physical and mental toll of their situation augmented considerably thanks to Bay’s orchestration of the technical components.

It helps that Gyllenhaal, Abdul-Mateen, and González are fully invested in all this hogwash. They give robust, larger-than-life performances that fit right in with the situations all three of their characters find themselves in. Do some of their decisions make a lick of sense? No, but that does not mean any of the trio call any type of attention to how absurd these events are. They’re all-in, and it thankfully shows.

Part of me does think I enjoyed this one as much as I did because it’s a non-superhero, non-reboot, non-sequel piece of pop action entertainment made by a major filmmaker with a signature style who’s been given the freedom to get his vision up on the screen with precious few strings attached. That’s no small thing, and while Bay’s approach to action and his thematic sensibilities have rarely meshed with mine, there’s no denying that when the director is at the top of his game few can stylistically match what he has to offer.

I had a blast while watching Ambulance. There was something about sitting in a giant theater with a full audience and having that awesome sound design wash over me like a tidal wave, with people giggling, shrieking, and cheering in unison at all the moments they were supposed to. This crazed shot of pure melodramatically idiotic adrenaline was just what I needed, and the thunderous roar of every engine was a fast and furious joy worth getting excited about. 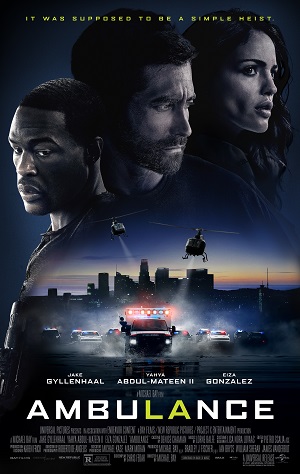