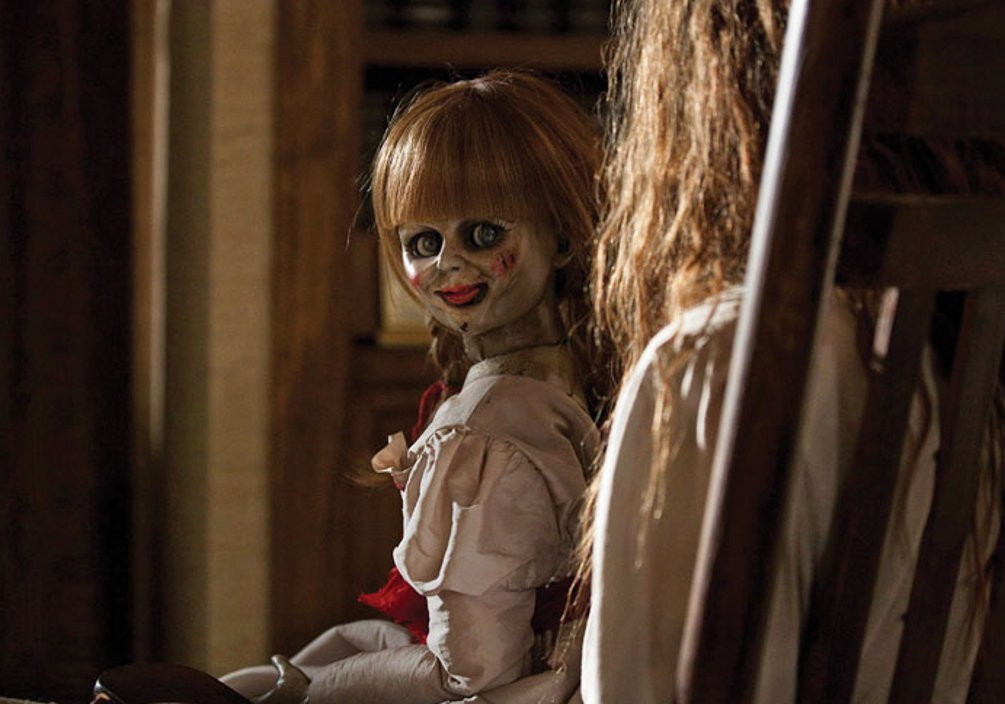 Mia (Annabelle Wallis) and John Form (Ward Horton) are expecting their first child. As a gift, he finds a rare, antique doll for his wife, a certain collectible she’s been trying to track down for quite some time. It’s a blissful moment, the two so very much in love, this present proof positive both of them are willing to do whatever it takes to make the other one happy.

This happiness is short-lived. A pair of intruders have murdered their neighbors and now they’ve turned their sights upon them. Knives come out. Blood splatters. The police arrive. As evening closes and morning breaks these murderous hellions lay down dead while Mia is rushed to the hospital with a wound to her abdomen, all the while the new doll added to the collection looks on in earnest as if making its own demonic plans. 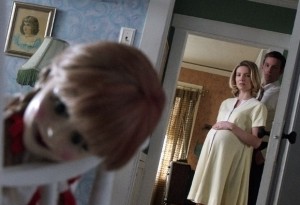 Thus begins Annabelle, a prequel to last year’s somewhat surprising supernatural horror hit The Conjuring, the film revolving around the origins of that picture’s introductory segment concerning a possessed doll. From that point things progress in relatively expected fashion, Mia and John moving into a new building only to find themselves fighting unseen ghostly forces they can barely comprehend. Something is out to ravage souls, and by all appearances its set its sights on the newborn baby girl the pair so desperately want to protect and care for. 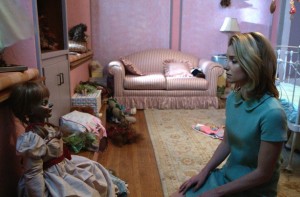 At the same time, a lot of this gets old surprisingly fast, and the fact Dauberman trots out so many tropes and clichés of the genre as if they were brand spanking new gets a tiny bit annoying as the picture progresses. Then there is the character veteran actor and former Cross Creek Academy Award nominee Alfre Woodard is forced to portray, everything about her annoying me in ways I can barely stomach let alone explain. It’s like she’s stepped out of a film from the 1950’s, something pre-Civil Rights, almost as if she’s auditioning to be in a biography of the great Hattie McDaniel than she is anything else.

It does not help that the doll, Annabelle, doesn’t actually play as big a part in the proceedings as I kept feeling she should have. Instead, Dauberman and Leonetti fill the screen with quick, whip-flash images of black-horned demons and ghostly dead-eyed little girls, using them to generate scares far more often than necessary. On top of that, the ending of the film is something of a complete and total disaster, the penultimate actions of a certain secondary character bordering on offensive making their actions not so much heroic as they are uncomfortably laughable.

Annabelle isn’t terrible. Wallis is actually quite good as the scared mother determined to face her fears in order to protect her child, while Tony Amendola makes the most of his stock priest character giving him more vitality and charismatic complexity than the guy by all accounts deserves. Additionally, and unsurprisingly, Leonetti has a keen visual eye, allowing cinematographer James Kniest and editor Tom Elkins (Haunt) to craft images that are disturbingly enthralling for almost the entire extent of the film’s 98-minute running time.

But the ending truly is a disaster, and as solid as much of the film is it destroys any affinity I might have been feeling for it in something close to a nanosecond. It doesn’t help that Horton is something of a nondescript wet noodle, or that, by and large, the scares themselves, while solidly delivered, are nothing I haven’t seen a gazillion times before. Yet it is that climax which truly sinks this prequel, Annabelle in the end only conjuring up my anger and vitriol that it would do something so horrifically stupid and think that would be okay. 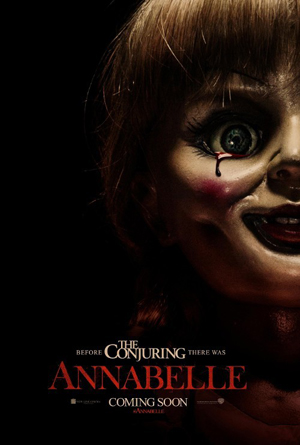