I feel like the new horror suspense thriller The Apparition has been on the release docket for what seems like forever. I swear I first reported about the film back in 2010, maybe earlier (I can’t say for sure). No matter how you slice it, the project has been sitting in the vault at Warner Bros for a long time, and it’s difficult not to assume the reasons for that have something to do with its quality (or lack thereof).

So it comes as no surprise that The Apparition is not a very good movie. It lacks suspense, doesn’t do a decent job of setting up its scenario and asks the viewer to suspend disbelief to a point no rational person can easily do with any sort of comfort. Even with a wonderful score from tomandandy (The Strangers) and some exquisite camerawork from Daniel Pearl (Friday the 13th), The Apparition just isn’t very scary. Not ever, and this is a humongous problem no amount of technical virtuosity can mask.

Not that there isn’t tension. Freshman writer/director Todd Lincoln does posit a fairly decent idea. If only he did anything interesting with it. But there is something initially beguiling in how young couple Kelly (Ashley Greene) and Ben (Sebastian Stan) deal with the crazy events taking place inside their new California desert home. The doors open on their own. Dressers move across the floor. The closet rearranges itself. There’s a decided Paranormal Activity meets Poltergeist feel to it all a lot of this that can admittedly come across as being moderately creepy.

If only Lincoln’s explanation to all this uncomforting strangeness wasn’t so lame. Ben may have a hand in this unexplainable haunting, and his former college friend Patrick (Tom Felton) has potentially made matters even worse. It’s all unintentionally laughable and nonsensically sophomoric. Everyone in the film talks in horror movie clichés and does exactly what is in their worst interest time and time again.

Thanks in large part to Pearl it does all look terrific, and Lincoln does showcase an astute visual flair I admittedly responded to. He also tends to avoid beating the viewer over the head with the typical assortment of shock jump scares. Instead, the director glides the viewer’s eyes around the corners of the frame searching for ethereal fingerprints that may not exist, and I guess on that front I must give the film a tiny nod of mild appreciation.

Thing is, when the finished product is this bland, this boring, those small bits worthy of a few polite kudos are frustratingly dwarfed by all the stuff that goes wrong. The movie is a massive misfire that builds to the type of unavoidably lame coda that had me rolling my eyes while in the same moment I was trying trying to stifle a yawn. The Apparition is a tediously uninspired ghostly mess, and in the cold light of day the wonder isn’t why it took so long for Warner Bros to put it into general release, but instead why they felt the need to do so at all. 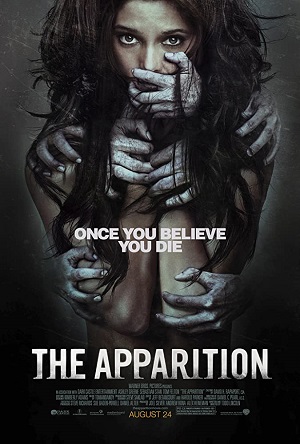